Review: On Having No Head, by Douglas Harding 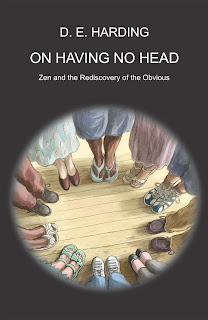 On Having No Head is very much a modern spiritual classic. As small a volume as it is, it contains the essential wisdom needed to enable the reader to escape the usual egoistic state of mind that we humans find ourselves in. The revelation that is elucidated so delightfully by Douglas Harding in its pages is a doorway into the freedom of enlightenment. In Buddhist understanding the realization that Harding presents to us is a Dharma gate, a Way to break out of the egoistic jail that most of us have lived all our lives. Turning our attention around 180 degrees as he encourages us to do is a powerful medicine to counteract the effects and causes of our suffering, and the reader of this review of On Having No Head is respectfully asked to bear this recognition in mind when it appears that Harding's teachings are being criticized.

"Only I am in a position to report on what's here," he writes. And this injunction, as true for you and me as it was for Harding, should always be at the back of our minds as we explore his words. This attitude of Harding's is a firm rebuttal to anyone that might cling to Headlessness as a kind of orthodox 'Harding-ism' that must never be questioned or challenged. Hence the openness of criticism as well as praise of Harding's Way in this review.

The book is divided into four chapters, the first three of which are so brief as to be almost shockingly bereft of any kind of depth. And yet this is highly deceptive, for in the vision that Harding describes there is an infinite variety of possible investigations and conclusions. Moreover, in Harding's practical and yet profound prose we have a work that hints at much more than it explicitly says, and in a manner that is sure to tickle us at frequent intervals. This lightness of touch is no doubt testament to the genuineness of Harding's 'Himalayan experience' and a life lived based upon it. For, no matter how serious life can get, and recognizing that spiritual awakening opens us up to the suffering of the world, there is a humor that derives from realizing our True Nature. Expressing the Truth of enlightenment in a way that is balanced with the concern for all beings' sufferings is the mark of an awakened one, and Harding was certainly one of those.

The book begins with a skillfully-rendered account of an experience Harding had in the Himalayas when walking there in his forties: he looked and saw that he had no head! As he writes in the first chapter of On Having No Head, this isn't merely a literary gambit to catch his reader's attention, but a description of what he actually experienced. A line drawing by the author illustrates exactly what he saw: khaki-colored trousers and shirt terminating in nothing above his chest; a spacious knowing filled with a vista of the Himalayas. As he states himself, such grandiose settings are not a prerequisite to seeing this simplest of truths, and you yourself can see what he means if you take a few moments to look for yourself:

Point at whatever is in front of you. notice opts shape, size, contours, colors and its solidity. Point at your legs, doing the same, working up your torso to your chest, taking note of what you see as you go. Now point at where your head is: what do you actually see? Don't rely on assumptions, or what you expect to find, but what do you really see right where your face should be at this moment? if, like me (and Harding), you see no head at all, no face, and certainly no brain, then you have experienced exactly what he describes in his book. And it is this experience which he claims is the heart of the spiritual life, Buddhist and other.

In recalling the dramatic revelation that came to him among the Himalayas, Harding emphasizes that a crucial element in his "seeing into Nothingness" was that "just for the moment I stopped thinking." This lack of thought is a common theme in both Buddhist forms of meditation and in the experience - at least initially - of awakening or enlightenment. Not that the objective of Buddhist meditation is to kill the mind and become a kind of zombie, but that as a natural and unforced consequence of meditative practice, thoughts will die down and even cease altogether. When this happens, life can be experienced without the interference of the discursive mind, that is to say, reality is realized as it is, not as we normally misapprehend it. This is what Harding describe in his account of his 'Himalayan insight'.

Harding also writes of forgetting his "thingness" when seeing his "mindless emptiness". Usually, we experience life as a thing in a universe in a universe of things, some friendly to us, some hostile, some helpful, some dangerous, some life-enhancing, some lethal. No wonder, then, that when Harding saw beyond his "thingness" he felt "only peace and a quiet joy". These are common fruits of awakening to the unconditioned void that we truly are. As he points out, this enlightening experience is beyond words and beyond questioning. It is where all queries cease in the simple yet profound knowing that is "utterly free of 'me'.

This reviewer does have problems with some of Harding's claims, however, and an important one is found in the very title of the book, On Having No Head. Harding writes that because the colours and shapes of the various features of one's head cannot be seen, then they do not exist. He states that no eyes, ears, mouth etc. can be found here because they cannot be seen. But, they can be felt, however. And, why is it that Harding trusts his eyes more than his hands? Surely it is the same aspect of mind that recognizes a head when it seen as much as when it is felt. Contrary to this, however, he resorts to the visual sense alone to find out the truth of what lies where he is, for when feeling for a head, one's hand is seen to disappear also. Indeed, he writes that anything that gets too close to the void disappears into it. (Interestingly, distance is needed for this argument, despite the fact that elsewhere Harding states that there is no distance for the first person.)

On the basis of his visual observations Harding concludes that there are two kinds of human being - headed and headless. Moreover, because he can see others' heads but not his own, he is unique amongst humanity, in his subjective experience. Instead of a head, he has (is) a "pure void". There's no distance or "twoness" to be see. All this is, to some degree, to misrepresent "the vision" of seeing our true nature, however, for as Harding argues to conceptualize about it is to veer from the experience itself. At best, Harding views his words as pointers to reawaken in himself the experience of the void, plus a way to communicate it to others. They are certainly not headless dogmas to be clung to by his students and followers.

It is this reviewer's experience that the essential claim of Harding, that by looking 'home' I can see the No-thing that is my central reality is true. Just looking now can verify this. But this does not preclude a head being here at the same time; if sounds can arise in silence, then sights can arise in the invisible. I find that my humanity, which includes these thoughts as well as a head, are here; I can feel my face and understand my thoughts. It is what they occur in, this wondrous, silent spaciousness that is the revelation of Harding's book and of Buddhism, for that matter. In his words and the experiments such as the pointing finger described above, Douglas Harding encourages us to see the truth of what we really are. Reading this book, despite its shortfalls, has  undoubtably helped many in achieving this aim.

If this viewpoint is accepted, then the belief that there are two kinds of human being in the world - the headless first-person & those with heads (everyone else) - is refuted. From this perspective, there are not two kinds of human, but one, for the "humanness" we find within the headless void is recognized along with all other humans. Then, we can recognize both our shared human qualities, both good & bad, as well as our central emptiness, which is beyond all opposites & human suffering. Harding's method of exploring what we find 'at home' is adaptable to all the senses, as he often demonstrated in his headless workshops, and as this reviewer can attest, it is also compatible with Buddhist sitting meditation. As Harding encouraged us to look for ourselves, and not accept anything he wrote as dogma, it is up to each of us whether we find his no head hypothesis or this reviewer's headed experience alongside the essential No-thing.

On Having No Head is an incredible little book, which is not surprising, as it was written by an incredible man: Douglas Edison Harding. Both in his public life as writer and workshop host, and in his private life (which seemed intertwined with the former in actuality), he was a warm, intelligent, articulate, caring man. This reviewer can attest to both as he met Douglas Harding several times, even being invited to stay at his house, as many people were. Although he wrote many books after On Having No Head, the basics of his method & teachings are all here, put across in a delightfully matter-of-fact way. There are few books available that can have such an immediate transformative impact on the reader as this one can, and it comes strongly recommended by this reviewer.

The above book is available from the Headless Way website here: On Having No Head: Zen and the Rediscovery of the Obvious

I attended one of Douglas Hardings talks many years ago.
I remember A few corporate types stood up and walked out when they realised it was about spirituality!

Shame really: his techniques are just as valid in the corporate world as anywhere else!

Not sure about that. Most wordly people want to bolster the ego, as they say a 'healthy ego' is good for business.
In the east, eliminating the ego is the direction as the ego is actually an obstacle to awakening.
You have to be careful, you don't water down the message.

Douglas Harding's techniques are usable anywhere by anyone - that's the point! Just look back and see who's here...