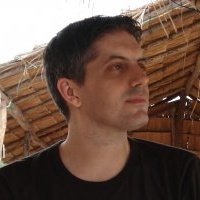 My name is G - short for Gary - and I am the author of Buddha Space. I was born into a working-class family in the peaceful city of Salisbury, England in the late spring of 1967. As a happy child, I would play in the back garden whenever the temperamental British weather would allow, often face down on the ground watching the minute world of ants and other creatures crawling through the grass. Often, so my family have told me, I would be found asleep in the garden, contently snoozing amongst the fauna & flora. At bedtime, I would find a similarly serene state of concentration staring at the patterns in the ceiling & the play of light upon them. Memories of childhood nighttimes, gazing at the bedroom ceiling:

Those shadows
Are right here
Drift into sleep

Such quiet moments spontaneously occurred throughout my childhood, and as a teenager, I would often sit by the window and look outside in silent reflection, sometimes accompanied by thoughts, sometimes not. Up to this point there was no intellectual element to these contemplations, and nor was there any organization of them. There was a simple, uncomplicated movement of the mind into quietude. Teenage nights contemplating a tree bathed in a street lamp's light:

Golden leaves
Sway in unison
With this mind

A sense of dissatisfaction with the world crystalized in my mid-teens, and it was then that I began reading as a way to find some direction in my search for meaning & happiness. The Gospels in the Christian Bible made some sense to me, but on the whole Christian theology, as I understood it, was incoherent and unbelievable. In the local library - a place that played an important role in my awakening - I borrowed and read a small book entitled What the Buddha Taught by the Venerable Walpola Rahula , and finally I found something that made sense to me. Not that I understood everything in it, but what I did grasp seemed to be familiar in some indefinable way, and these teachings have been the guiding principles of my life ever since.

At the age of eighteen I was reading another book called An Introduction to Zen Buddhism by D.T Suzuki that was a gift from a friend, when something incredible happened. Upon reading a certain passage, all thought stopped. Indeed, initially there was no thought, no emotion and no-one here to produce either. Just the bare experience of a book, the hands holding it, and a room. Pure silence reigned, whilst a gradually arising bliss seemed to fill the room. Then the frost thought, which arose in response to a teenage fear of my mortality which had been concerning m at the time; if I die now, it really doesn't matter! Following this initial thought, other thoughts came, until the usual flow of the mind was restored. The first *satori, upon reading the words of D. T. Suzuki:

That experience changed my life, but at frost I didn't understand what had happened, nor did I know how to repeat it. A week later it occurred again while I gazed momentarily at a plastic bag caught on the brach of a tree as it fluttered in the wind. The second satori, when looking out of a window:

After that, 'it' didn't happen again for some time - despite desperate attempts to to reread the same passage of the book looking for a repeat performance. And then I read On Having No Head by D.E. Harding, which someone had deposited in the local library…and viola! No more haphazard approach to seeing this void, just point home to what Ajahn Chah called our real home - and the innate Buddha-nature reveals itself most clearly. But here's an important point to take note of: it's not my Buddha-nature or original face, for 'I' occur in it along with the rest of the cosmos. 'It' is not part of me and neither does it belong to me - quite the reverse! The third satori, using the methods of D. E. Harding:

In the early Nineties I had the pleasure & privilege of meeting Douglas Harding many times, even staying at his house a couple of times. (He often played host to people who wanted to meet 'the Headless Man.') Douglas made it clear to me that what he promoted in the shape - or no-shape - of seeing-who-we-really-are is no different to what Zen Buddhism calls seeing one's Buddha-nature or satori. In my humble experience too, these two different approaches to seeing our true nature have the same result. A major difference is that Buddhists have the whole history and culture of the Buddhadharma to support (or hamper) their awakening, wheres headless types are pretty much left to their own devices, which can also result in problems, as Douglas himself acknowledged. And yet, what are these systems of awakening that we can call the Buddha Way and the Headless Way, but conditioned phenomena, even if they point to the unconditioned? And that which os conditioned is by its very nature imperfect and limiting, which is why the wonderful Buddhist monk Ajahn Sumedho has said that ultimately even Buddhism must be let go of to reach what he calls 'ultimate simplicity.'  For Ajahn Sumedho:

In the early Naughties, I had the pleasure & honor of meeting Ajahn Sumedho at Amaravati Buddhist Monastery in the UK. Whilst I had read books containing his transcribed talks, along with those of his teacher, the late great Thai forest monk Ajahn Chah, meeting Ajahn Sumedho was something else altogether. He exuded what in Buddhism is called metta ('loving-kindness' or goodwill), as well as a wise knowledge of the Dharma. In his person, Ajahn Sumedho displayed that 'ultimate simplicity' referred to above, smiling much of the time, yet also displaying concern for those around him with problems. There have been other teachers and books that have taught me much also, but those mentioned above are the main ones, along with close family & friends.

As true as all the aforementioned is, there is another truth that has been referred to here and there, but deserves more attention - and that is attention itself. Attention, mindfulness, awareness - no matter how we conceptualize it, it has been the central focus of my life. 'It' is not separate from 'me,' however, for the one flows in the other and vice versa. This true nature or no-thing is indeed my real home, which I have never left, despite my apparent travels which have led me to live in tropical Thailand in recent years. Sitting in meditation, sweeping the floor, or pointing a finger here are all Dharma gates to awakening, just like the life-changing books that I've read. Out of this comes Buddha Space, an attempt to share this Dharma-eye with anyone that cares to look, as well as promoting teachings & books that do the same. So, as the Buddha taught - let's walk on!

*Note: Satori is a Japanese word meaning enlightenment. It is used a lot in Zen Buddhism to refer to the experience of seeing true nature (kensho in Japanese). Despite being found in many Japanese Zen texts, it isn't a word to be used lightly, and isn't here. Neither is it a word to be used as some kind of self-promotion, as the realization that it indicates is itself the antithesis of egoistic outbursts. Nevertheless, at the risk of being accused by some readers of being either frivolous or self-promoting - or both - here, the author feels its use is justified so's to give a flavor of satori to the reader. Poetry can be better at this than prose, for where the latter can tend to get tied up in verbosity or overcomplicating matters, the former's succinctness can hint at a lot more than is actually said. This is especially true of haiku, that wondrous poetic form born of the Zen-influenced Japanese heart. Please forgive the author any indulgences!

For more on D.T. Suzuki, D.E. Harding, Ajahn Chah & Ajahn Sumedho, click on the tabs above.

I am writing a dissertation on 'Meister Eckhart and Buddhists: what is the attaction?' and your blog is very helpful. I would welcome any suggestions Gary. John Woodhouse

Hi G! Would you like to review my book, Spiritual Awakening (the easy way), published by Hay House... I can send you a review copy.

Thanks and have a nice day!
Tim van der Vliet
(pls check my website for email etc)

I am one year older than you are and have similar path. I was born in Hong Kong and went to Worcester to study When I was a kid I was often listening to a noise that I found in silence and also moments of nowness while looking out of the window during my sleepless nites and looking at trees in the morning.
I was also very lucky to have got to know some friends at the Thai Temple in Wimbledon and a Chinese friend there who used to be a Monk at Chithurst gave me some books of Ajahn Chah and thereafter I became a big fan of his lineage. Although I did not have the opportunity to meet Ajahn Sumedho, I am fortunate to have met other Ajahn Vajiro, Ajahn Viradhammo,Ajahn Brahm etc. in HK.
I was also a fan of the Headless Man but I can't really say I have moment of Satori there but it does change the way I see things.
As for DT Suzuki, I used to read a lot of his books and was very inspired but after learning of what he said about the Sino-Japanese War according to Zen at War, I was doubting how could an Enlightened person say such things.
Anywqay, I really enjoyed your blog and I think your comment on the Bhikkhuni incident have been fair.
Look forward to reading more of your blogs!
Metta,
Alan