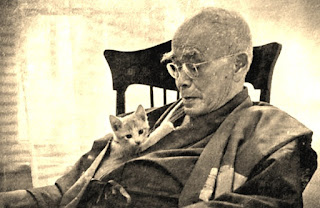 Does the cat have buddha-nature?

The object of Zen discipline consists in acquiring a new viewpoint for looking into the essence of things. If you have been in the habit of thinking logically according to the rules of dualism, rid yourself of it and you may come around somewhat to the viewpoint of Zen. You and I are supposedly living in the same world, but who can tell that the thing we popularly call a stone that is lying before my window is the same to both of us? You and I sip a cup of tea. That act is apparently alike to us both, but who can tell what a wide gap there is subjectively between your drinking and my drinking? In your drinking there may be no Zen, while mine is brim-full of it. The reason for it is: you move in a logical circle and I am out of it. Though there is in fact nothing new in the so-called new viewpoint of Zen, the term “new” is convenient to express the Zen way of viewing the world, but its use here is a condescension on the part of Zen.

This acquiring of a new viewpoint in Zen is called satori {wu in Chinese) and its verb form is satoru. Without it there is no Zen, for the life of Zen begins with the ‘opening of satori.’ Satori may be defined as intuitive looking-into, in contradistinction to intellectual and logical understanding. Whatever the definition, satori means the unfolding of a new world hitherto unperceived in the confusion of a dualistic mind. With this preliminary remark I wish the reader to ponder the following mondo (literally, ‘asking and answering’), which I hop>c will illustrate my statement.

A young monk asked Joshu to be instructed in the faith of Zen. Said the master: "Have you had your breakfast, or not?" "Yes, master, I have," answered the monk. "Go and get your bowls washed," was the immediate response. And this suggestion at once opened the monk's mind to the truth of Zen.

Later on Ummon commented on the response, saying: "Was there any special instruction in this remark by Joshu, or was there not? If there was, what was it? If there was not, what satori was it which the monk attained?" Still later Suigan had the following retort on Ummon: "The great master Ummon does
not know what is what; hence this comment of his. It is altogether unnecessary; it is like painting legs to a snake, or painting a beard to the eunuch. My view differs from his. That monk who seems to have attained a sort of satori goes to hell as straight as an arrow!"

What does all this mean — Joshu's remark about washing the bowls, the monk's attainment of satori, Ummon's alternatives, and Suigan's assurance? Are they speaking against one another, or is it much ado about nothing? To my mind, they are all pointing one way and the monk may go anywhere, but his satori is not to no purpose.

Tokusan was a great scholar of the Diamond Sutra. Learning that there was such a thing as Zen, ignoring all the written scriptures and directly laying hands on one's soul, he went to Ryutan to be instructed in the teaching. One day Tokusan was sitting outside tr\'ing to look into the mystery of Zen. Ryutan said, "Why don't you come in?" Replied Tokusan, "It is pitch dark." A candle was lighted and held out to Tokusan. When he was at the point of taking it Ryutan suddenly blew out the light, whereupon the mind of Tokusan was opened. 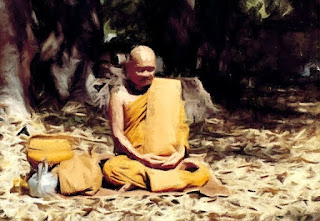 Meditate reciting Buddho, Buddho until it penetrates deep into the heart of your consciousness. The word Buddho represents the awareness and wisdom of the Buddha. In practice, you must depend on this word more than anything else. The awareness it brings will lead you to understand the truth about your own mind. It’s a true refuge, which means that there is both mindfulness and insight present. Wild animals can have awareness of a sort. They have mindfulness as they stalk their prey and prepare to attack. Even the predator needs firm mindfulness to keep hold of the captured prey however defiantly it struggles to escape death. That is one kind of mindfulness. For this reason you must be able to distinguish between different kinds of mindfulness. Buddho is a way to apply the mind. When you consciously apply the mind to an object, it wakes up. The awareness wakes it up. Once this knowing has arisen through meditation, you can see the mind clearly. As long as the mind remains without the awareness of Buddho, even if there is ordinary worldly mindfulness present, it is as if unawakened and without insight. It will not lead you to what is truly beneficial. Mindfulness depends on the presence of Buddho – the knowing. It must be a clear knowing, which leads to the mind becoming  brighter and more radiant. The illuminating effect that this clear knowing has on the mind is similar to the brightening of a light in a darkened room. As long as the room is pitch black, any objects placed inside remain difficult to distinguish or else completely obscured from view because of the lack of light. But as you begin intensifying the brightness of the light inside, it will penetrate throughout the whole room, enabling you to see more clearly from moment to moment, thus allowing you to know more and more the details of any object inside there.

Note: The word 'Buddho' (a variant of 'Buddha') is often taught as a word to recite mentally in combination with the breath, by meditation masters of the Thai forest tradition. One recites the syllable 'Bud' on the in-breath and 'dho' on the out-breath.
Posted by G at 12:00 AM 1 comment: