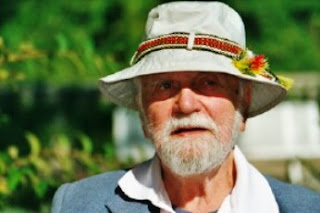 Douglas Edison Harding: The Man With No Head

One of the biggest influences on my Buddhist practice was not a Buddhist, but he knew a lot about Buddhism, especially the Zen variety. His name was Douglas Harding, and I had the pleasure of meeting him quite a few times during the 1990s. Douglas was a warm, humorous, intelligent, articulate, generous, open man - the last quality of which is most immediately relevant here. You see, Douglas was, by his own admission, headless. Furthermore, this condition resulted in him being blown wide open to the world, not separated off from it by being encased in a head.

Now, you may protest that if the photograph above is indeed of the said Mr. Harding, then he most certainly did posses a head. And, Douglas would not have argued with you, as long as it was understood that it was from your perspective that he had a pinkish meatball plonked atop his body; for, he claimed that from his own experience, he did not. Douglas was so passionate about his decapitated state that he not only wrote a dozen major works on the subject but also travelled the world sharing his vision with anyone that cared to listen (or look).

In the extract below, Douglas does not discuss being headless, but rather focuses on the Nothingness that is seen where a head would be expected to be found. He refers it as "our Absence, our Void Nature or Emptiness," as well by other names, all of which he admits fall well short of the mark in describing exactly what this condition is like, which is the "awkward fact" of enlightenment. And, as he spent decades emphasizing, it is to be experienced rather than believed in or philosophized about. This experience can pointed at with words, as well as a finger, and Douglas was extremely adept at this, as shown below.

"Three words cover it—seeing our Nothingness. It's that simple. Or, to drive the point home, turning our attention round 180° and looking into What we are looking out of, into our Absence, our Void Nature or Emptiness or Speckless Clarity, into our lack of characteristics, distinguishing marks, attainments, you-name-it. It is not—emphatically not—knowing all about Natureless Nature, or understanding it profoundly, or believing in it sincerely, or even feeling it acutely, but seeing it with such finality and such intimacy that we see this Absence which we are and are this Absence which we see. But alas, how liable even the most apt words are to complicate what is, after all, simplicity itself!

The awkward fact is that this Experience, which is none other than the substratum of all experience, is impossible to describe. It's as ineffable and incommunicable as the redness of red or the sweetness of honey or the smell of wild violets. Try telling a man colour-blind from birth what purple is. Well, telling him about his Empty Core is even more futile. Somehow you must get him to look in for himself at himself by himself instead of just out at you. Then and only then nothing could be easier or plainer, more blazingly self-evident to him, than his Nothingness, his disappearance in your favour.

However, three things can be said, and need to be said here, about this essential in-seeing.

First, precisely because it's void of all qualities of its own, because there's Nothing to it, it is for all beings of all grades and of all worlds one and the same. There are no angles or perspectives on This, no variations. There are no preliminary or private views or privileged showings, no more enlightened or less enlightened versions of This, no heights to mount to or fall away from, and certainly no religious or spiritual or aesthetic qualities to cultivate.

Second, (and for the same reason) one's "first fleeting glimpse" of one's Nature doesn't differ at all from one's "latest and clearest and most sustained seeing" of that Nature. No matter how brief or how sustained it may be, this Experience is unique among all experiences in that it has no degrees of clarity or intensity or familiarity. It's as if every time it happens happens to be the first time. Like it or not, there's no encouraging upturn, never any progress to plot on one's spiritual progress chart. Either you see This or you don't. Here's the one skill you can't get better at, but only exercise more frequently and for longer periods.

Third, it follows that, whoever and wherever and whenever you may be, your Inside Story is the plainest of all plain tales, and identical with the Inside Story of all creatures. So that to see What you really are is not only to see What they really are but to be What they really are. Beyond all doubt you are me and him and her and it, and all the rest. And at once you have hit on the answer to all the loneliness and alienation in the world. You rest on the Ground of Being and of all loving and caring. Secretly you are healing, along with your own wounds, the wounds of this wounded world."
(Douglas Harding, 'The Experience and the Meaning.')

Now, this "Absence" can be experienced, it is at the very core of our being, and it reveals the complete interconnectedness of life. Is this not, in Buddhist parlance, anatta, or 'not-self?' The Buddha taught that everything we take to be the self is in truth not. Buddhist meditation is designed in part to reveal this profound realization step-by-step, aggregate-by-aggregate. (The aggregates are the five 'heaps' that the Buddha divided the human condition into: body, feeling, perception, mental formations, & consciousness.) When this is fully seen, there is nothing of the ego-self left, only No-thing, full of the world.

Moreover, just as many great Zen masters have claimed, such as two of my favourites, Huang Po & Bankei, "Nature" is immediately realizable if only we dare to look within with honesty & awareness. (After an initial glimpse, we may need to cultivate this "in-seeing" if we wish to fully benefit from it, however.) Another parallel Douglas' experience has with Buddhism is his encouragement that we look for ourselves, and that we are our own authorities on what's going on where we are, not Douglas. This echoes the Buddha's declaration that the teaching (the expression of No-thing) is to investigated & decided on by each of us, not to be blindly followed.

With the above advise fresh in mind, let's explore the three things that Douglas was so keen to be said (and heard). Firstly, that this No-thing is for all to be discovered and lived from. This is clearly in line with the Buddhist attitude that all beings can be led to enlightenment. Indeed, looking back and seeing this Emptiness, it is evident that it is full of the world with all its suffering. It is capacity for all to be, and also is aware of how unenlightened state causes so much anguish, and reaches out to help those in the slough of despond.

Douglas' second important point was that the first glimpse of No-thing does not differ in the least to more "sustained seeing." This statement appears to be more problematic than the first one, for in Buddhist traditions there are stages of enlightenment described. In the Theravada tradition, for example, there are four levels of awakened beings described, with only the highest (arahant) being considered completely enlightened. In the Zen tradition, there are degrees of awakening from initial glimpses called kensho to the fuller, more complete experience known as satori. It is the experience of this author that the stages of enlightenment described in Buddhism are real, and yet at the same time the essential experience itself does not alter. Rather, it is the demise of the delusion of self within this experience that changes, eventually (and this part is taken on faith for now) dying away utterly. So, on this point, there are differences between Buddhism and Douglas' description of the Void, but the central realization appears the same.

Douglas' third important thing to be noted seems to have no conflict with the Buddha's teachings. Here, he says that the No-thing at my centre is the same as that which lies at yours, and all other creatures. This is identical with the view taken in Buddhism; the Buddha's Emptiness is the same as that of anyone else; it is the same No-thing that is at your core, my core, and all beings. This can be confirmed by looking within and checking with how Douglas sees his "Absence" and comparing it with one's own. (We can also do this with anyone that has awakened to this experience, for as Douglas so often said, we are all equal authorities on the vacuity at the heart of being.

Now, this article was deliberately entitled 'The Awkward Fact & Anatta' because the author wished to bring to the reader's attention to two issues: the incommunicable nature of our "Natureless Nature," and its similarity to the Buddhist understanding of anatta, or not-self. With reference to the former, it might be born in mind by the reader to take what they read with a pinch of salt, and of the latter to explore in experience (and not belief) to see if it is so or not.

The full article can be read on the Headless Way website here: The Experience and the Meaning.