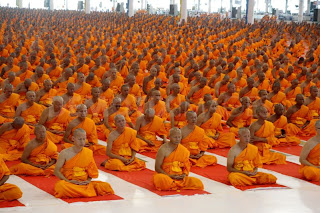 Mass meditation: which monks are really 'doing it?'

Meditation is often associated with Buddhism. Buddha statues are more often than not made in the cross-legged sitting position, inspired by the Buddha's enlightenment while sitting in such a position when he realized nirvana under the bodhi tree (enlightenment-tree). Indeed, meditation is considered a prerequisite to enlightenment. Not that everyone that becomes awakened to the Dharma (the-way-things-are) does so when sitting in meditation, but enlightenment is dependent upon mind states and realizations made whilst meditating. An example is that of the Buddha's ordained cousin, Ananda, who meditated all night before going to his bed. Just prior to his head hitting the pillow, his Dharma-eye was opened, and he was an arahant (enlightened one). Not that it is suggested Ananda was enlightened after just one sitting; he meditated for years before finally realizing complete awakening.

In Thailand, most people have meditated at some time or another. Or, at least, they have acted as if they were meditating. Let me explain; in Thai primary schools most children are taught to 'meditate,' or to sit with their eyes closed (most of the time). They aren't usually actually meditating, that is using a series of mental exercises to develop calm focus & wisdom, but are instructed on how to look as if they were. Thailand is a land where appearance is more important than substance. If someone looks and acts important, then they are. If someone acts as if they are meditating, then they are. Looks are everything. Just ask an average Thai woman, whose self-worth is so often dependent upon whether she is told she is beautiful or cute.

Thai temples are normally all gold and bling, sparkling in the tropical sunlight. But, the true light of Buddhism is the nimitta ('concentration-object') that arises in deeper states of meditation. And this form of light is rare indeed. So, while Thailand's temples shine, darkness prevails in the hearts of most Thai Buddhists, including the mass of its monks, at least where meditation is concerned. Most Thais are concerned with merit-making rather than developing mindfulness & meditation, despite the Buddha praising the latter pairing as productive of much merit, let alone being crucial to the noble eightfold path to enlightenment. Morality is another important aspect of the path, and some Thais keep the Buddhist precepts as well as make merit by giving to monks. Meditation, however, combined with morality lead to wisdom and hence enlightenment. But most Thais, including monks, appear disinterested in making their minds fertile for awakening. Why?

Walking the noble eightfold path is not easy. It involves a lot of correct effort (which is one of the eight aspects of the path). It involves moral training in correct speech, correct action & correct livelihood, built upon the foundation of the Buddhist precepts briefly mentioned above. All this is quite challenging at times, and if this isn't enough, the stilling & focussing of the mind in meditative practices such as sitting meditation are necessary parts of the path, too. It's relatively to fake meditation, just sit with the eyes closed until you think nobody's looking! But actual meditative discipline is just that; a discipline. The mind will wander, it will struggle with boredom, agitation, and other mental hindrances. But there is light at the end of the tunnel, and perseverance will result in meditative success; calmness, contentedness, and clear insight, to mention but a few benefits. But all this takes dedication and a lot of time; most people - Thai or not - simply aren't willing to devote masses of minutes to sitting quietly watching their breath or their mind.

As a foreigner (British) in Thailand, when it's mentioned that I meditate, the most common reaction is surprise bordering on shock - Thais just can't believe a westerner meditates. The second reaction is the one they most often give fellow Thais, which is a respectful recognition of something considered almost 'holy,' even 'magical.' Now, this writer makes no claims to be either holy or magical, but the benefits of meditation that he has experienced are manifold: peace, calmness, insight, confidence, conviction (in his abilities & the efficacy of the Buddhist path). Therefore, it seems such a shame that most Thai Buddhists have never really meditated, and hold some rather fanciful ideas of what it consists of. In this, they aren't that different to non-Buddhists.

If this article has sparked an interest in the noble eightfold path & meditation, I wholeheartedly encourage you to take them up. Try to find a Buddhist teacher to learn from, but if you can't, there are plenty of books and websites out there that can at least get you started in the right direction. (Explore the weblinks on the right of this page and the reviews of various books collected under the Reviews link, also to the right.) If you have meditated before, but have lost the habit (as happens to us all once in a while), why not give it a go again. Just a few minutes every day can make a big difference to our levels of contentment & mental health. Not to mention the lowering of blood pressure - allegedly! So, if you're a Thai Buddhist, you can invigorate Thai Buddhism through these practices, and if you're not, you can be one of thousands the globe over exploring the way to enlightenment. Feel free to contact me for further information or encouragement: knowing & experiencing the benefits of meditating on the path is a contagious undertaking!
Posted by G at 12:00 AM

" while Thailand's temples shine, darkness prevails in the hearts of most Thai Buddhists, including the mass of its monks"
Its a real eye opener!

Highlighted this way, perhaps a little editing might be required! It was meant to read something like "while Thailand's temples shine, darkness prevails in the hearts of most Thai Buddhists, including the mass of its monks, at least with regards to meditation." Bit of an omission there! Still, as the Thais are prone to remark themselves, "Mai pen rai."


Most Thais can't believe I am not nor never have been Christian.
My partner never meditates, saying, " It not my activity,"' yet keeps reminding me he is original Buddhist.
And I can't get him to read a short Ajahn Chah piece in Thai, because he has had terrible experiences while being a monk as a young boy for a year when his grandparents has not enough food and he was used as Abott's slave in Isan.
Oh well, he probably will once I die.

Then your death would be a real benefit to him! (But let it come in its own time, nevertheless!)

This blog's story is well written. The writer paid close attention to the grammar. English proficiency is also very high. A lot of new words were used while writing the content for this blog. I enjoy learning about Buddhas in Thailand .