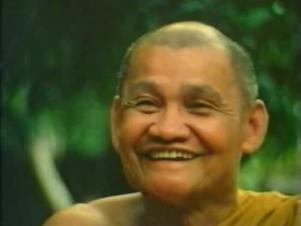 A popular practice in Thailand is to visit a temple and make merit (ทำบุญ / tum-boon in Thai). Thais take much comfort in the good results that they will receive from giving food, robes, and medicine to Buddhist monks, as seen in the current Khao Pansa (เข้าพรรษา) festivals, where temples are inundated with gifts. Of course, people don’t stop at giving just the four basic requisites to the monks, they will also offer candles, incense, toothbrushes, and just about anything else that they think the men in orange might need or want. It doesn’t always stop there, though. A monk at Wat Pah Nanachat here in Ubon Ratchathani told me that many laypeople even like to offer mobile phones to the monks – I didn’t know that enlightenment was available with a quick phone call nowadays!

All this isn’t to say that giving alms food and other stuff to monks is in any way ‘wrong’, it’s just that many (most?) Thai Buddhists seem to think that it’s all they need to do in their practice of the Buddha Dharma. And in this, they would be ‘wrong’! The Buddha taught that there are two kinds of gifts (dana) in this world. The first kind is what Buddhism calls amisadana, or material gifts, whilst the second kind is known as Dhammadana, or the gift of Truth. In the Pali Canon, he is quoted as saying:

“The gift of Dharma excels all other gifts.”
(Dhammapada, verse 354)

The highly-respected Thai monk Ajahn Chah was also somewhat doubtful of the long term benefits of giving material gifts to the monks when not backing up such action with actually practicing the Buddhist Way. After all, this kind of behavior is akin to singing God’s praises in a church on a Sunday, then being an absolute heathen the rest of the week. The venerable forest master questioned the ultimate merit to be found in visiting temples to pay homage to the Sangha (the monks’ order), but then not bothering to learn how to improve themselves in any way. He compared it to trying to dye a dirty, unwashed cloth: it’ll still retain all the dirt.

Ajahn Chah was concerned that people use the Dharma as a stopover point, flitting from temple to temple like a crazed bee, picking up the pollen of desire and dumping at the next flower, only to collect more ‘pollen’ there. People want to perform good works, in the hope that this will deliver good results for them in the future; they’re not concerned with giving up unwholesome acts, such as those refrained from in the five precepts.

This desire to receive future benefit from making merit is often geared towards material goals, rather than spiritual ones. Merit makers are all too often caught up in the desire to accrue more social status or wealth, but remain unconcerned with increasing the amount of kindness, compassion, and wisdom in their lives. Ajahn Chah taught that we can accrue merit whilst sat in our homes, if we practice according to the Dharma, developing wholesome mind states such as harmlessness, generosity, equanimity and mindfulness. He told merit-making visitors to Wat Nong Pah Pong that the highest form of merit is giving up that which is unwholesome: giving to the poor and to monks are good deeds, which will sow the seeds for future happiness, but if wrongdoing is not relinquished also, that happiness will be short-lived.

As an interesting footnote, many merit-makers that visited the great ajahn would also request numbers from him, believing that as he was a highly-accomplished meditation master, Ajahn Chah could supply them with winning lottery numbers. He always refused to give his visitors any numbers, emphasizing that practicing the Buddha Dharma was the real way to achieve something good in this life. He never denied the existence of magic, but just felt that people’s focus should be on the true magic of Dharma. In a final twist of irony, after Ajahn Chah’s death, many local people in Ubon used the date of his demise as their lottery numbers – and they won!

Going to a temple and making merit is a worthy endeavor, and one which I would never say people shouldn’t do, but if practiced in isolation, without following the Buddhist precepts or developing mindfulness and kindness, the merit made will be much less potent, and unable to counter the future effects of unwholesome action. To truly give the gift of Dharma doesn’t just mean teaching Buddhist ideas to others, nor paying for the publication of Dharma books, but in actually living those teachings day to day. This is the heart of the Buddhist path to Awakening.
Posted by G at 8:44 AM No comments: 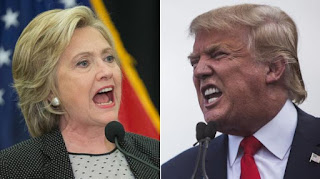 Watching political leaders, we may despair. They often let us down with unjust laws, unethical deeds and sometimes nepotism. True enough, there are principled, hardworking people in the field of politics out there, but all too often our news headlines are filled with the misdeeds of our leaders, whether elected or not. The current presidential contest in the United States is an exemplar of this. Claims and counterclaims of illegal & immoral actions of their opponents are issued daily by the rival camps. Indeed, observing the profusion of insults and lying exchanged, it's hard to imagine political behaviour & debate becoming any worse - though I wouldn't bet on that one!

Here in Thailand, society is subject to the same political vicissitudes found the world over. Claims of corruption, incompetence, and favoritism have beleaguered successive governments, preceding the military coups that have overthrown two democratically-elected governments over the past decade. If this predominately Buddhist nation is to progress in the future, it requires sound political leadership. But, how should Thailand expect its future elected leader to behave? Well, Buddhism does have a set of guidelines for kings, which in the modern context includes prime ministers and presidents. They are called the ten duties of a king, or dasavidha-rajadhamma in Pali (or rajadhamma for short). They were taught by the Buddha over two thousand years ago, but are as valid a set of principles now as they were all those centuries ago. Let’s take a brief look at them:

Historically, there was a man who exemplified the ten rajadhamma, and that man was called King Ashoka (304-232 BCE), who ruled India for forty-one years. Initially, he was a great warrior general, winning many battles, and continued to expand the Indian empire during the first eight years of his reign. After one particularly bloody campaign, King Ashoka wandered the sight of his army’s victory, and seeing the carnage all around him, famously cried out, “What have I done?” Following this, he embraced Buddhism, establishing a just kingdom along Buddhist lines and was known as ‘Dhammashoka’ – “Pious Ashoka.” He promoted wildlife protection, banning hunting for sport, built universities, hospitals for people and animals, and constructed irrigation systems for trade and agriculture. He also renounced the use of violence, ceasing all military campaigns against his neighbours, instead sending monks and nuns abroad to spread Buddhist teachings on wisdom and kindness. Indeed, a son and daughter of King Ashoka who were monk and nun took Buddhism to Sri Lanka, where it remains the predominant faith to this day. This is not to say that he promoted Buddhism at the expense of other religions, however, as he also encouraged tolerance and understanding between different creeds and ethnic groups. King Ashoka is remembered by Buddhists and non-Buddhists alike as an example of a truly compassionate and just ruler, who lived according to the ten rajadhamma.

Now, this tenfold list of kingly responsibilities is surely a set of qualities that would make any ruler a great leader of their country today, just as King Ashoka was in ancient India. But do such leaders exist nowadays, one might ask, considering the many examples of politicians that have been exposed as anything but charitable, moral, or honest? Scandals have involved so many political and royal figures that it seems nigh on impossible to find one that comes anywhere near the ideals in the ten duties.

Thailand does have a leader that is considered to be the embodiment of these qualities, however: His Royal Highness King Bhumibol. With his numerous development projects to help the Thai people, and his reputation for helping those in need, the King is a figurehead that gets directly involved with the concerns of his people. His work in the area of rain-making to help the millions of Thais working the land is well documented. He is a deeply loved man, whose popularity is directly related to the public perception that he exudes the ten kingly duties.

The highly-respected Anglo-American monk Ajahn Sumedho has spoken on the subject of the ten royal duties, saying that rather than simply applying them to our presidents and prime ministers, to see if they’re really up to the job of governance, we can reflect on them with regards ourselves. We can contemplate our own behaviour, as well those who are in positions of power, to see if we are ruling our own lives in the spirit of the rajadhamma. After all, what’s the point of having a good constitution, a great leader and government, if we the people are selfish, unwise, violent, and ignoble?
Posted by G at 8:25 AM No comments: