Review: Running with the Mind of Meditation, by Sakyong Mipham 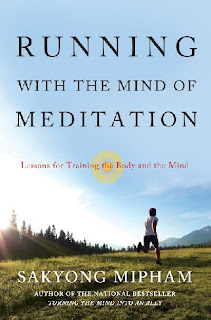 One modern criticism of Buddhism is that it focuses on the mind to the exclusion of the body. So, while meditation and mindfulness practices are widely promoted by Buddhist teachers, physical fitness is not.This book addresses this issue by suggesting a practice centered on both running and meditation, as is revealed in its somewhat cumbersome full title: Running with the Mind of Meditation: Lessons for Training Body and Mind. The author writes in the Preface:

"To me, the relationship between meditation and running is natural, for one is a training of the mind and one is training of the body. However, I am hardly an expert on running. This book is therefore not a training manual, but a guide to integrating particular elements of meditation into the activity of running"
(Running with the Mind of Mindfulness, p.13)

The author, Sakyong Mipham Rinpoche, may or may not be an 'expert' with regards running, but he is an experienced one, including having run in marathons. He is also the son of Chogyam Trungpa Rinpoche and the leader of Shambhala, which is an international community of meditation retreat centers. He is a keen golfer as well as runner, combining both activities with his role as Buddhist teacher, and is the author of the books Ruling Your World & Turning the Mind Into an Ally. All this makes him the perfect person to write a book on running and meditation, which he does extremely well in Running with the Mind of Meditation. And, much to his credit, he does mix the two up into a kind of hotchpotch spirituality, as the following extract shows:

"People sometimes say, 'Running is my meditation.' Even though I know what they mean, in reality, running is running and meditation is meditation. That's why they have different names. It would be just as inaccurate to say, 'Meditation is my exercise. I have known some advanced meditators who have been able to bring their meditative mind - that strength and relaxation -  into their body with its channels, nervous system, and muscles. They become strong, radiant, resilient."
(Ibid. p.19)

Interestingly, Sakyong Mipham notes that it is unlikely that such meditation adepts would be able to run a sub-three hour marathon, despite their meditative skills. Similarly, he writes that it is improbable that running might lead to enlightenment. He does believe that to use the meditative mind to complement running is a way to integrate the two in a way that benefits the meditative runner. In Part I of the book, the author introduces some basic ideas of meditation to the reader, including mindfulness of the breath. This he does with simplicity & clarity, which will benefit those readers who are new to Buddhism & meditation.

In this section of the book he also recalls his own beginnings with running marathons. He describes his first marathon in Toronto, Canada, when he got a four and a half inch blister on one of his feet. This he does with admiral honesty, revealing his thoughts and responses as he struggled to complete the race, which he did. These real life insights are sprinkled through the book which give it the personal touch, not making it too dry or boring. Indeed, some of these passages are among the most inspirational in Running with the Mind of Meditation:

"On a crisp, fresh morning in the Scottish Highlands, I had planned a ten-mile run. Both John Pratt and I were training a lot that winter, and we were both in good shape. Our run had a delightful and magical quality. My mind was very clear, and I remained completely present, noticing every rock on the trail and even the dew glistening on the pine needles. Every gust of wind invigorated and refreshed me.Even the clear echoes of our feet hitting the trail brought me back to the moment. As we inhaled and exhaled, the vapors created a mist. I felt connected to the sky and the earth. My mind was completely there for everything in the environment, yet it remained calm, and I was also self-aware."
(Ibid. p.152)

In Part II, the book focuses on two main themes: mindfulness and gentleness. The author illustrates how mindfulness of the body can help to bring awareness of bad posture which can effect the body adversely, and by extension running. Gentleness is an important quality for the meditator as it helps to reduce unwanted tensions in both the mind & the body. It is an attitude which Sakyong Mipham makes much of, claiming that it will benefit a person's running as well. He twists the Nike slogan 'Just Do It' to 'Just Do It - With Gentleness!' He believes that aggression, which so often emphasized in modern sport, especially of the professional variety, creates negative mind states which affect performance badly. Gentle determination is much superior, giving focus and strength without any negative effects.

In subsequent parts of the book, the author writes on subjects such as happiness, healthiness, and spontaneity. These and other positive qualities are the result of meditation and mindfulness. Sakyong Mipham appears passionate in his claims that such attributes improve a person's running abilities. He also believes that running can be an important focus of the meditative mind, giving it a living focus for its enlightening attention. This can increase levels of happiness and healthiness, he asserts, and is therefore beneficial not only to the serious Buddhist practitioner, but to anyone that wants a more content lifestyle. This does not mean that the book is of little interest to meditating Buddhists, however, as the following segment reveals:

"Sem is the Tibetan word for the cognitive mind that is based upon subject and object. There is also the word lo, which refers to the intellect - what one understands. There is also yi, another word used for the conventional cognitive mind. The word rikpa means 'awareness.' This awareness has two meanings: general and nonconceptual awareness, which is linked to the word wisdom. Then there is the word namshi, which means consciousness. There are said to be eight different levels of consciousness. A variety of other words are used to indicate the enlightened mind, the transcendent mind, or transcendent wisdom."
(Ibid. pp.179-180)

Talking of the enlightened mind, it is worth noting that this book is not really about this subject. Although it is mentioned here and there, enlightenment is not the focus of this work, nor does it refer to enlightening practices and techniques such as is found in the Tibetan dzogchen tradition. So, if your main interest in Buddhism is of how to let go of attachment and the suffering that accompanies it - which is enlightenment - this book probably isn't for you. But, if you're a runner, a Buddhist that wants to get fit, or someone interested in broader issues within Buddhism than enlightenment, this book is well worth reading.

From my 25 year running experience which kept me sane enough to lead me to the cushion.(the real deal)

It was being insane that lead me to the cushion! Too much running away from this no-self...