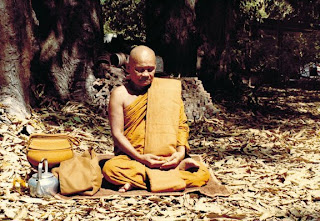 “To define Buddhism without a lot of words and phrases, we can simply say, ‘Don’t cling or hold on to anything. Harmonize with actuality, with things as they are.’”
(The Teachings of Ajahn Chah, p.26)

Among the most famous of Thai monks in Thailand and across the world is Ajahn Chah (อาจารย์ชา), who lived from 1918 to 1992. Born in a small farming village near Ubon Ratchathani in the Northeast of Thailand, he ordained at the age of twenty and spent the first seven years of his monastic career studying Buddhist teachings as written in the ancient Indian language Pali.  Disenchanted with the fact that this brought him no nearer to enlightenment, or Nirvana, he wandered his homeland as a forest monk, meditating on nature and his mind.

He returned to Ubon Ratchathani to inhabit what was considered by locals as a haunted forest, and there established a training monastery. The emphasis in this monastery was centered on meditation, mindfulness, and the Vinaya, or monastic code. Ajahn Chah was very popular both with native Thais and Westerners wishing to learn the Dharma from a living master, some as laypeople, and others as monks or nuns living under his leadership in Northeast Thailand. A flavor of the way he instructed his disciples comes in the introduction to the book 'The Teachings of Ajahn Chah':

"He taught villagers how to manage their family lives and finances, yet he might be just as likely to tell them about making causes for realization of Nibbana. He could instruct a visiting group on the basis of morality, without moralizing and in a way that was uplifting, but would gently remind them of their morality at the end of infusing them with his infectious happiness; or he might scold the daylights out of local monastics and laypeople. He could start a discourse by expounding on the most basic Buddhist ideas and seamlessly move on to talking about ultimate reality."
(From the foreword by Paul Breiter)

One classic talk to be found in the same book is also one of my own favorites entitled Our Real Home. It was a talk addressed to an aging lay disciple approaching her death, and uses all of his teaching skills. Ajahn Chah begins this instruction by using the analogy of household utensils such as cups, saucers, plates and so on as examples of aging and impermanence. He tells the disciple to accept that the body too ages and decays just like her kitchen ware, and through contemplating this fact she can come to terms with her own impending mortality. He doesn’t stop here, however; the talk winds on, leading to a most striking description of the meditative process by using the mantra Buddho (a variant of the word Buddha), which leads to a letting go of all that is impermanent. He tells her that:

“Anyone can build a house of wood and bricks, but the Buddha taught that that sort of home is not our real home, it’s only nominally ours. It’s home in the world and it follows the ways of the world. Our real home is inner peace. An external, material home may well be pretty but it is not very peaceful. There’s this worry and then that, this anxiety and then that. So we say it’s not our real home, it’s external to us.”
(The Teachings of Ajahn Chah, p. 218)

Ajahn Chah's focus was on what might be deemed the basics of Buddhism such as the four noble truths, suffering and its ending, Samadhi (meditative concentration), morality, vinaya (the monk’s rules of conduct), and emptiness, to name but a few. According to the people that knew him, Ajahn Chah was someone totally at peace with himself and the world, and has often been described by those that met him as the happiest person they ever met. As a strict forest monk, he kept to the monk’s discipline assiduously, and demanded the same from his ordained disciples. Yet, he could also be incredibly humorous or tactful when the occasion required such. He was even referred to by some senior Thai monks as a sort of ‘Zen-Theravada Buddhist’, with his tendency to sacrifice orthodoxy when the situation asked for something more vital and direct. The following extract could well have been said by a Mahayana monk:

Another aspect to his teaching style was its directness, Ajahn Chah never being someone to overcomplicate things or philosophize where simple, succinct words would do. This gave him the air of someone that had realized what life was about, and was living from this knowledge. Many of his followers, including those closest to him, consider Ajahn Chah to have been a arahant, or enlightened being. And yet, he remained an ordinary man in many ways, willing to meet others on their terms, not too haughty or self-important. A wonderful anecdote of Ajahn Chah's non-philosophical style of teaching is the following tale:

"One day, a famous woman lecturer on Buddhist metaphysics came to see Ajahn Chah. This woman gave periodic teachings in Bangkok on the abhidharma and complex Buddhist psychology. In talking to Ajahn Chah, she detailed how important it was for people to understand Buddhist psychology and how much her students benefitted from their study with her. She asked him whether he agreed with the importance of such understanding.
'Yes, very important,' he agreed.
Delighted, she further questioned whether he had his own students learn abhidharma.
'Oh, yes, of course.'
And where, she asked, did he recommend they start, which books and studies were best?
'Only here,' he said, pointing to his heart, 'Only here.'"
(A Still Forest Pool, by Jack Kornfield & Paul Breiter, p.12)

Ajahn Chah’s rich and non-doctrinal teaching style wasn’t indicative of a man who lived the life of a libertine, however. As mentioned above, he promoted strict adherence to the Vinaya (monk’s rules), and as often been said, he lived with the absolute basic necessities of life, giving away many fancy gifts that laypeople felt inspired to give him. This isn’t to say that he didn’t appreciate the generosity of the local population that supported his community of monks and nuns with their material needs. Indeed, he was very keen to instill in the ordained community at his monasteries a sense of gratitude to such laity, saying that:

“Right now, they have the faith to support us with material offerings, giving us our requisites for living. I’ve considered this: it’s quite a big deal. It’s no small thing. Donating our food, our dwellings, the medicines to treat our illnesses, is not a small thing. We are practicing for the attainment of Nibbana. If we don’t have any food to eat, that will be pretty difficult. How would we sit in meditation? How would we be able to build this monastery?”
(The Teachings of Ajahn Chah, p. 607)

Ajahn Chah was a powerful teacher, according to former students such Paul Breiter, author of Venerable Father: A Life With Ajahn Chah. He use a variety of techniques to elicit the best from those that practiced with him, including encouragement, criticism, sincerity & humor. He especially liked to cajole the monks under his direction by way of chastisement on one hand, and humor on the other. When asked how he taught westerners Buddhism when they didn't speak Thai and he didn't speak their languages, he replied that a farmer trains a buffalo without knowing buffalo language! (Buffalos are symbols of stupidity in Thailand.) Foreign monks did learn Thai after some time, however, and Ajahn Chah would then communicate to them in the colorful manner which he was famous for. In the book Venerable Father, Breiter recalls the following discussion about a western monk called Aranyabho:

"As I sat down Ajahn Chah said, 'Aranyabho's got dogshit in his pocket. He goes somewhere and sits down but there's a bad smell, so he thinks hmmm, this place is no good. He gets up and goes somewhere else, but he notices the bad smell again so then he goes somewhere else…He doesn't realize he's carrying the dogshit around with him wherever he goes…' There was never any bad feeling when he talked to people like this, because we knew it came from a pure, loving heart; he was offering us, right then and there, a clear and simple solution to our problems, one which he had obviously practiced. His words, and his whole being, simply said, let go - now."
(Venerable Father, p.54)

A distinct concept that Ajahn Chah used in his teachings was what he called in Thai poo roo (ผู้รู้) - 'the one who knows.' This is the faculty of the mind that is aware of whatever is arising at present; it is what enables you to be aware of these words right now. And, it is not a personality; it is an impersonal operation of the mind. Students that had been exposed to other forms of Buddhism or other kinds of religion and philosophy would often ask Ajahn Chah about concepts from these traditions. He would be open to such approaches, as in the following dialogue that involves both 'the one who knows' and the Zen Buddhist idea of 'original mind.' (Perhaps it is conversations like this one that resulted in more orthodox Thai monks labeling him 'Zen-Theravada,' as mentioned above.)

It’s a blessing to be exposed to such a rich depth of wisdom that Ajahn Chah clearly possessed. The teachings that he gave are a treasury of wisdom & compassion. It is an injunction too, however, for it's a call to arms, to take up the practice of the Buddhadharma with sincerity and endeavor to cultivate the wisdom and compassion required to transcend this world of suffering. Moreover, in the life and teachings of Ajahn Chah, we have the perfect example of the selfless sharing of such realization that true wisdom brings.

The books 'A Still Forest Pool,' 'Being Dharma,' and Venerable Father' are all commercially available.
Posted by G at 2:38 PM