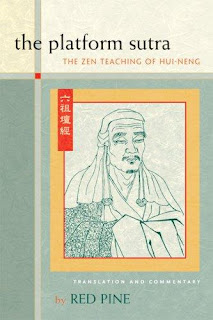 Every English-speaking Zen Buddhist in the world would benefit from owning a copy of this stupendous work. Red Pine, who has also produced excellent translations & commentaries on the Heart, Diamond & Lankavatara sutras, has produced what will surely be known as the definitive English edition of this seminal Zen text. His translation is clear, and the commentary is informative & wise. The layout of the book is well thought out too, with a full translation of the Platform Sutra, an introduction by the author, a verse-by-verse commentary, an appendix text of a section of the sutra not included in the main translation, an English-Chinese glossary of names & terms, and the sutra in its original Chinese script. Phew! What effort Red Pine has put into this work.

The Platform Sutra, or to give it its full title - as Red Pine does - The Mahaprajnaparamita Sutra of the Direct Teaching of the Southern School of the Supreme Mahayana, The Platform Sutra, is widely considered the most important of Zen texts. It was originally composed in the 8th Century and consists of a biography and the teachings of the sixth patriarch of Zen Buddhism, Hui-neng. It's central focus is the direct perception of true nature, or enlightenment, as viewed by Hui-neng. Modern Zen sects such as the Soto and Rinzai in Japan trace themselves from master to master back to Hui-neng and the teachings contained in this sutra. Zen is, of course, notoriously difficult to put onto words, and Red Pine argues in the introduction that in fact the teachings in the Platform Sutra are not about gaining knowledge but about realizing the wisdom we already posses. Nevertheless, there's a plethora of information contained in his commentary that most readers will find enthralling and even enlightening. Take the following observations on the word Zen itself:

"Zen. When Buddhist meditation was introduced to the Chinese,  the Sanskrit term dhyana was rendered zen-na and later shortened to zen. In the beginning, this word simply meant 'meditation.' But it was used by the heirs of Bodhidharma to refer to the practice of pointing directly to the mind, and it became the name of their school as well. Nowadays, this term is pronounced ch'an in Mandarin Chinese. But Mandarin is the Manchu pronunciation forced upon the Chinese by the founders of the Ch'ing dynasty in the seventeenth century, whereas the pronunciation retained in Japanese and in that part of China where Zen began comes much closer to the original pronunciation, which was something like dzian. Because Zen is closer to the pronunciation of Hui-neng, and because the Japanese version of this teaching is better known in the West, I have used Zen throughout this text as well as in my commentary."
(The Platform Sutra, p.146)
Whilst much of the above may be familiar to the seasoned Zennist, how many of us knew that the original pronunciation of the word was dzian? This reviewer certainly didn't, and he has read countless books on Zen Buddhism. Perhaps we should adjust well known Zen books to fit in with this knowledge - Dzian Mind, Beginner's Mind & Dzian in the Art of Archery? Maybe not. Interesting nevertheless, as so much of Red Pine's commentary is. But this isn't what the sutra itself is really about, of course. It's about the experience of Zen (or Dzian!), not the etymology of it. The famous 'Dharma-duel' that forms the heart of the text are the verses of Hui-neng and his rival to the heirship of the Zen school, Shen-hsiu. Red Pine translates these poems with his usual clarity, and they are quoted below, Shen-hsiu's first, followed by Hui-neng's responses.
"The body is a bodhi tree
the mind is like a standing mirror
always try to keep it clean
don't let it gather dust."
(Ibid. p.6)
"Bodhi doesn't have any trees
this mirror doesn't have a stand
our buddha nature is forever pure
where do you get this dust?"
(Ibid. p.8)
"The mind is the body tree
the body is the mirror's stand
the mirror itself is so clean
dust has no place to land"
(Ibid. p.8)
There's two points to note here. Firstly, as this is a complete translation of the Platform Sutra, it includes both of Hui-neng's verses, not only the first. And, as the second appears to contradict it at first glance, this makes the first verse seem not so negative as it does when read without the accompanying poem. Is there no bodhi tree as the first verse claims, or is the mind the bodhi tree as the second verse declares? This apparent contradiction is of the very nature of Zen, and to penetrate this seeming inconsistency is to get to the very essence of Buddhism. In his commentary on this part of the sutra, Red Pine draws his reader's attention to an important difference between the Tunhuang versions of it and the other versions that up until the last century were the only versions known:

"Both Tunhuang versions, as well as Hsihsia translation, include two gathers here. However, the Huihsin, Chisung, and Tsungpao editions have only the first one, and they amend its third line to pen-lai wu yi-wu: 'actually there isn't a thing.' Commentators have wondered which version was Hui-neng's original poem. I think maybe both. Poets are always making changes to their poems. As for 'actually there isn't a thing,' this line also appears in a poem written around 780 by Cold Mountain's friend, Feng Kan. And Huang-po quotes Feng Kan's poem in his Wanlingchi. (See The Zen Teaching of Huang Po translated by John Blofeld, p.78) While the verse here, 'our buddha nature is forever pure,' is not catchy, this concept runs throughout this text, while the concept behind 'actually there isn't a thing,' if it can be called a concept, is less obvious."
(Ibid. p.109)

The above is an excellent example of the qualities noted above with regards Red Pine's exertions. It includes much scholarly knowledge of the subject matter, with references to the various editions of the Platform Sutra, Huang-po, Feng Kan, as well as the similarly impressive work of Red Pine's predecessor in rendering Chinese Zen texts into English, John Blofeld. As is often the case with Red Pine, however, it also contains original thoughts on the translated text, with his observation that perhaps the different versions of it represent the thinking of its composer rather than amendments made by his successors. Moreover, his insight into the implications of the different lines 'our buddha nature is forever pure' and 'actually there isn't a thing' are worthy of careful reflection by the reader.

Red Pine's The Platform Sutra: The Zen Teaching of Hui-neng is both dynamic and perceptive. It is dynamic in its use of innumerable other related texts, and is perceptive in the original thinking of the author. It cannot come with a more wholehearted recommendation than this reviewer can give. It is a wonder, in both the original teachings of the Zen master Nui-neng, and in Red Pine's lively and insightful commentary. Not only will Zen Buddhists benefit from its wisdom, but also Buddhists in general; and even those not Buddhist will find much to inspire them in its pages. As to its central thrust, that we can see our true nature right here and now, this book is certainly capable of such inspiration. And it shows that this truth is the very buddha nature that Zen Buddhists have sought and found ever since the Buddha taught his Dharma two and a half thousand years ago, and that it is forever pure.

"Mandarin is the Manchu pronunciation forced upon the Chinese by the founders of the Ch'ing dynasty..."???

This is incorrect. Mandarin is not Manchu and one could hardly say it was "forced" on the Chinese, as Mandarin was the native language of the Chinese living in northern China. The Manchus themselves originally spoke the Tungusic Manchu language but came to adopt the language spoken by their subject people in northern China: what is commonly called Mandarin. As for how the Chinese pronounced Sanskrit terms in the sixth century, we can only make educated guesses.

Hi i have read your post and i think it's useful.Thanks for the sharing this website. it is very useful professional knowledge.
https://blog.mindvalley.com/diamond-sutra