An Experiment in Awareness 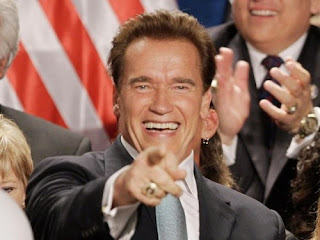 Look at what Arnie's pointing at...and be 'terminated!'

The central way to establish mindfulness in Theravada Buddhism is through the various satipatthana, or ‘frames for mindfulness’, which comprises focusing attention on one of four types of phenomena: the body, feelings, the mind and mind objects. Contemplation of the body includes the well known practice of anapanasati, or ‘mindfulness of breathing’, where one keeps attention on the in and out breaths, developing concentration and insight into the nature of the breath. Another long-established type of meditation is zazen, as promoted in Zen Buddhism. As with mindful breathing, zazen has become a very popular form of meditation in modern times.

Hopefully you did the experiment above, rather than just reading the instructions and intellectualizing about them. Douglas Harding’s experiments are entirely based on doing them, otherwise they probably sound like so much gibberish! If you did do the experiment, but didn’t quite ‘get it’, you can always do it again, this time making sure to accept only the facts of this moment rather than what you imagine to be where ‘you’ are.Why do this particular form of mindfulness? Well, over the years, I’ve found it to be a pretty good technique for getting beyond many of the ego-based emotions and hang-ups that can dominate much of human thought. Looking back here and seeing that nobody’s home, when practiced over years, can alleviate much personality-produced angst, as well as the kind of self-consciousness that blighted my own youth. Also, with less of me here to get in the way, there’s a natural openness to all the people that appear in this naked awareness, with nothing between us to separate 'me' from 'them.'

As I’ve written before, some of the insights that have arisen in this mind in relation to what Douglas called ‘in-seeing’ do differ from some of his conclusions, along with many of his ‘followers’. Being brought up in a strict Christian environment, Douglas later related ‘seeing-who-we-really-are’ to a theistic view of life, describing this experience as seeing (and being) God. As you might expect of a Buddhist, I don’t experience the space here as any kind of deity, as such, but that’s not to say that Douglas’ ideas are completely at odds with my own views. One man’s God might be another man’s Zen, or one woman’s Brahman could well be another lady’s Nirvana. Enlightenment ain't to be found in words!

An important point that I would make as a Buddhist is that ‘the Headless Way’, as this technique is widely known, is not a stand-alone practice. Douglas and his many friends have often seen it as such, referring to religious tradition when it fits in with the ‘headless’ experience, but rejecting conventional spiritual life when it seems to suggest that there’s more to enlightenment/salvation than merely looking ‘home’. Seeing the void at the centre of ‘G’ is only part of the Buddhist Way that I practice however, and many insights have arisen over the years that have come from traditional Buddhist teachings and endeavors, rather than from ‘in-seeing’. The two complement each other nicely, and that’s the Way it works out here.

So, if you got the point of the experiment and saw what Zen Buddhists call “Your Original Face (before you were born)”, why not stick at it for a while and see what insights arise. If you wish for further information on this efficacious mindfulness technique, please click here: The Headless Way.