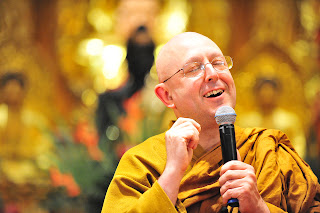 “This dependent arising, Ananda, is deep and it appears deep. It is through not understanding, not penetrating, this teaching that this world resembles a tangled ball of thread, a bird’s nest, a thicket of sedge or reed, and that people do not escape from the lower states of existence, from the course of woe and perdition, suffering from the round of rebirth.”
(The Buddha to his cousin the Venerable Ananda, Digha Nikaya 15)

One thing that I really like about the teaching style of the British Buddhist monk Ajahn Brahmavamso (‘Brahm’ for short) is his detailed analysis of Buddhist teachings. He excels, for instance, at explaining the central teaching of the Lord Buddha called paticca-samuppada, or ‘dependent arising’. He has explained that dependent arising is only thoroughly known by a noble person (ariya-puggala), someone who has reached one of the four stages of enlightenment. This is why, he says, there is so much misunderstanding regarding paticca-samuppada - and why so few contemporary Western and Eastern Buddhist ‘masters’ teach it!

Ajahn Brahm is often asked how there is rebirth when Buddhism teaches that there is no soul to be reborn. He replies to this question by stating that the answer is dependent arising, for it is an empty process which flows from life to life, conditioned by the twelve forces that direct a life this way and that. In sequence, the twelve links of paticca- samuppada are: delusion (avijja), volitional formations (sankhara), consciousness (vinnana), name-and-form (nama-rupa), the six sense bases (salayatana), contact (phassa), feeling (vedana), desire (tanha), clinging (upadana), existence (bhava), birth (jati), aging-and-death, sorrow, lamentation, pain, grief, and despair (jara-maranam- soka-parideva-dukkha-domanassupayasa).

The venerable forest monk has explained that it is deluded karma (actions) and tanha (craving) that supply the ‘fuel’ for existence and rebirth in the form of the ‘stream of consciousness’ entering a new life. The Buddha explained this process in the following way:

Ajahn Brahm teaches that when one’s mindfulness is empowered by jhana (deep meditative concentration), the stream of conscious is revealed as ‘granular’, as tiny moments of consciousness, that like grains of sand are very close together but not actually touching. It is karma and craving that produce the impersonal forces that direct the journey of consciousness, much like the autopilot in an aircraft. Insight into this process enables one to see with certainty that consciousness is independent of the body and therefore can survive upon its demise, in the impersonal and soulless progression of paticca-samuppada. This is how rebirth occurs without a soul.

But what exactly is the process by which awakening to the way things are (the Dharma) is achieved? As Ajahn Brahm is keen to point out, it is not by the various methods and philosophies that many modern teachers like to espouse each according to their own personal (and personality-dependent) opinions. It is in the Buddha’s teaching on dependent arising that we find the answer to this question. The Buddha taught that it is with the ending of delusion that volitional formations cease, and that with the ending of the latter that conscious ceases, all the way down the chain of twelve links to the ending of aging-and-death, sorrow, lamentation, pain, grief, and despair. This ‘ending’ (nirodha) is also known as *nibbana (extinction), and bodhi (enlightenment or awakening) along with many other synonyms.

Moreover, the way to establish this process of awakening in our lives is what the Buddha called ariya-atthangika-magga, or the 'noble eightfold path.' This path entails the cultivation of right understanding, right attitude, right speech, right action, right livelihood, right effort, right mindfulness, and right concentration. Correct understanding of paticca-samuppada constitutes part of right understanding, and on the intellectual level forms part of the basis for walking the path. Ultimately, however, it is not in doctrinally-accurate understandings of Buddhist concepts that nirvana is realized, but through transcending all forms of clinging that bind us to our desires, which in turn create suffering. Then, and only then, will we truly, fully comprehend dependent arising as a living fact, that when reversed through Buddhist practice, is the very process of enlightenment.

To end this very brief description of dependent arising, a quotation from the classic Visuddhimagga:

*Note: The Pali word nibbana is its equivalent of the Sanskrit term nirvana. Both may be translated as 'blowing out,' as in the blowing out of greed, hatred & delusion. More often the term is rendered 'extinction,' or left untranslated due to being easily misunderstood…by the unenlightened!
Posted by G at 12:00 AM