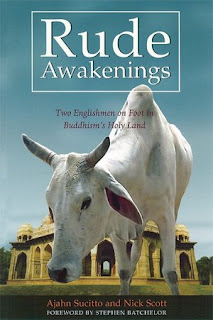 Rude Awakenings is a life-changing book, not only giving insight into the grueling pilgrimage of a forest monk and layman across Northern India, but also the journeys they take within their own hearts. Written in the alternating voices of the more contemplative Ajahn Sucitto (abbot of Cittaviveka Forest Monastery in England), and the more outgoing naturalist Nick Scott, the book is an entertaining mix of travelogue, Buddhist history, meditative reflections, Indian cultural observations, geography, and personal conflicts.

Ajahn Sucitto, as might be expected, supplies the more insightful pieces, exploring not only the Indian backdrop and its inhabitants, but his own reactions and shortcomings. He isn’t scared to criticize his traveling companion either, at one point lamenting how Mr. Scott fumbles his way through the daily Buddhist chants, getting basic words like Buddha and Dhamma mixed up, and ending up with Bumma!

For his part, Nick Scott describes his constant struggles to get the two of them around the holy sights of Buddhism with woefully inadequate maps, and a prevalence to seek out difficult terrain in the desire to see Indian wildlife, rather than take the more direct route – much to the chagrin of the ajahn. Again, as with Ajahn Sucitto, Scott is very honest in his appraisal of his own mind states, admitting at one stage of the journey that he even endangered their lives with his behavior.

Constant everyday struggles include getting Ajahn Sucitto’s inflatable bed to inflate, finding suitable venues for sleeping, the constant barrage of questions form the inquisitive natives and the often comical attempts to find somewhere to eat before the noon deadline that the Buddhist monastic rules contain. The official bureaucracy of various Indian institutions often seemed to exist to thwart the duos attempts to fulfill the aspirations of the two pilgrims to see as much of Buddhism’s historical attractions. At one point, it seems they won’t get to see the supposed ashes of the Buddha, as they didn’t fill out the appropriate form – until an ingenious, if not ludicrous piece of lateral thinking gains them access.

The challenges that the two Englishmen face aren’t always so harmless, however, and towards the climax of the book they find themselves in a life threatening situation in bandit country that surrounds the place of the Buddha’s enlightenment, Bodh Gaya. This is a truly distressing event that can leave the reader genuinely wondering whether the both of them will get out it alive. The kindness displayed in the wake of this part of the tale balances out the harrowing accounts of the near fatal encounter in the woods of Bihar State.

So, all in all, this is an enthralling account of a journey through the places that the Buddha visited during his lifetime, including Lumbini (the Buddha’s birthplace), Kushinagar (the place that he died), and of course, the above mentioned Bodh Gaya. But, it is the inner travels of Ajahn Sucitto and Nick Scott that really capture the imagination and admiration of the reader, surrounded as they are with wonderful descriptions of India, its people, and the teachings and history of Buddhism. Once read, this book can stay with the reader for a long time afterwards, with the tastes and smells and raw emotions that the two pilgrims write of merging with one’s own memories as if one had been there with them. A life changing book, in deed.

Rude Awakenings: Two Englishmen on Foot in Buddhism’s Holy Land, by Ajahn Sucitto and Nick Scott was published by Wisdom Publications in 2006.
Posted by G at 12:00 AM