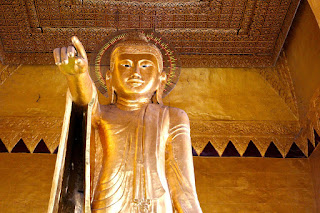 Buddha's finger is pointing - at what?

The central way to establish mindfulness in Theravada Buddhism is through the various satipatthana, or ‘focuses of mindfulness’, which comprises focusing attention on one of four types of phenomena: the body, feelings, the mind and mind objects. Contemplation of the body includes the well-known practice of anapanasati, or ‘mindfulness of breathing’, where one keeps attention on the in and out breaths, developing concentration and insight into the nature of the breath. Another long-established type of meditation is zazen, as promoted in Zen Buddhism, which is largely based on ‘just sitting.’  As with mindful breathing, zazen has become a very popular form of meditation in modern times.

•          Point at the scene in front of you, taking note of the size, colour, shape and opacity of an object you can see. Next, point to another object near to where you are, answering the following questions: how big is it? What colour is it? What shape is it? Can you see through it, or is it opaque?

•          Next, point at your own feet, asking and answering the same questions as above, before moving on to focus on your legs. Take a look at your torso, also taking the time to analyse its size, colour, shape and solid nature.

•          Now, point your finger at your face – or at least where others see your face. What do you see? How big is it? What colour is it? Does it have a shape? Is it an opaque thing, or the exact opposite? Pointing at where others see my face, I see no such thing. Right here, right now, this finger is directed not at a face or head, but at... no thing whatsoever!

•          All the different sized things on display are in stark contrast to what I see here: they appear in the absence of any such thing here. Ditto colours – there are no colours here other than the colors of the objects arising in awareness. The same is true of shape – the ‘no thing’ here has no shape, as only things have shape, and there’s no thing here to have a shape! As to opacity, all the opaque objects that can be seen right now occur in this invisible no thing: its absence is their being. What do you see when you point at your ‘face’?

Hopefully you did the experiment above, rather than just reading the instructions and intellectualizing about them. Douglas Harding’s experiments are entirely based on doing them, otherwise they probably sound like so much gibberish! If you did do the experiment, but didn’t quite ‘get it’, you can always do it again, this time making sure to accept only the facts of this moment rather than what you imagine to be where ‘you’ are. Why do this particular form of mindfulness? Well, over the years, I’ve found it to be a pretty good technique for getting beyond many of the ego-based emotions and hang-ups that can dominate much of human thought. Looking back here and seeing that nobody’s home, when practiced over years, can alleviate much personality-produced angst, as well as the kind of self-consciousness that blighted my own youth. Also, with less of me here to get in the way, there’s a natural openness to all the people that appear in this naked awareness, with nothing between us to separate 'me' from 'them.'

Now, some of the insights that have arisen in this mind in relation to what Douglas called ‘in-seeing’ do differ from some of his conclusions, along with many of his ‘followers’. Being brought up in a strict Christian environment, Douglas later related ‘seeing-who-we-really-are’ to a theistic view of life, describing this experience as seeing (and being) God. As you might expect of a Buddhist, I don’t experience the space here as any kind of deity, as such, but that’s not to say that Douglas’ ideas are completely at odds with my own views. One man’s God might be another man’s Zen, or one woman’s Brahman could well be another lady’s Nirvana. Enlightenment ain't to be found in words!

An important point that I would make as a Buddhist is that ‘the Headless Way’, as this technique is widely known, is not a stand-alone practice. Douglas and his many friends have often seen it as such, referring to religious tradition when it fits in with the ‘headless’ experience, but rejecting conventional spiritual life when it seems to suggest that there’s more to enlightenment/salvation than merely looking ‘home’. Seeing the void at the centre of my self is only part of the Buddhist Way that I practice however, and many insights have arisen over the years that have come from traditional Buddhist teachings and endeavours, rather than from ‘in-seeing’. 'Buddha's finger' pointing home complements Buddhist meditation & other practices so well; at least, that's the experience here.

So, if you got the point of the experiment and saw what Zen Buddhists call “Your Original Face (before you were born)”, why not stick at it for a while and see what insights arise. If you wish for further information on this efficacious mindfulness technique, please click here: The Headless Way.
Posted by G at 12:00 AM No comments: 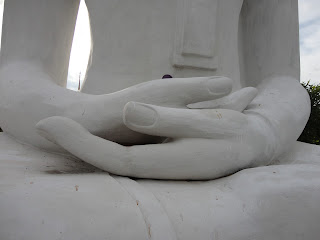 Thus he dwells in contemplation of the body, either with regard to his own person, or to other persons, or to both, he beholds how the body arises; beholds how it passes away;
beholds the arising and passing away of the body. A body is there this clear awareness is present in him, to the extent necessary for knowledge and mindfulness, and he lives independent, unattached to anything in the world. Thus does the disciple dwell in contemplation of the body.”

Note: The above is taken from the Satipatthana Sutta, an ancient mindfulness & meditation discourse attributed to Buddha. This section describes the basic meditation technique called anapanasati (mindfulness of breathing), a practice still used in many Buddhist traditions from Thailand to Japan, Tibet to California. The above instructions can be tried out by oneself if no meditation teacher is available, perhaps for five to fifteen minutes at first. After becoming settled in this practice, the time may be increased and the benefits, both in body & mind, can increase exponentially. (Such benefits may include physical & mental relaxation, calmness, and an increase in focus levels. Further instructions can be found throughout the Internet by searching for the key words satipatthana, anapanasati & mindfulness of breathing. Further note: As he was addressing monks, in the original text Buddha uses the term bhikkhu (Buddhist monk) not shravaka (disciple); also, this is why the text above uses ‘him’ not ‘her.’ Mindfulness of breathing is a simple technique that anyone can utilise, whether monk or nun, layman or laywoman.
Posted by G at 8:01 PM 2 comments: