Review: What the Buddha Taught, by Dr. Walpola Rahula 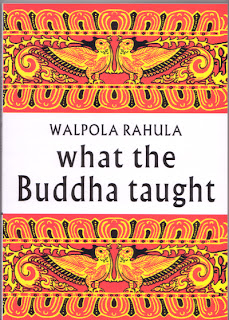 This tremendous little book was this reviewer's introduction to Buddhism many, many moons ago. Upon reading it, he immediately found a connection with the Buddha's teachings that was absent in his exposure to other faiths and philosophies. In fact, it was more like remembering facts previously known that lurked in the subconscious. It was a reacquaintance with familiar truths. And, like a lot of its readers, rereads the work every few years or so to refresh his memory, as well reflect on the text to see if any new insights arise, which they invariably do.

In simple yet detailed language the Sri Lankan monk-scholar Dr. Walpola Rahula presents his reader with the basic teachings of the Buddha as found in the earliest extant texts, the Tipitika (or Pali Canon). He covers the four noble truths, not-self, and meditation, as well as the relevance of what the Buddha taught to the contemporary world. This is all followed - in later editions - with an excellent choice of original Buddhist texts from the Pali Canon translated into clear modern English.

After an extremely brief (one page!) introduction to the person of the Buddha, the second chapter focuses on the Buddhist attitude of mind. This emphasis on the actual teachings of the Buddha rather than his person is a strength of What the Buddha Taught. In doing so, its author avoids mixing the two up in the mind of the reader, which is easily done. And the reason to steer clear of this mixing up is that unlike most religions which encourage their followers to worship a god or gods or other such divine figures, in the Pali Canon the Buddha wants us to worship no-one. Instead, he points us to take a good hard look at the mind, and to thereby understand it, this being the path to enlightenment.

The tools to make this journey into truth are contained in the Buddha's four noble truths. Dr. Rahula commits four of the eight main chapters of the book to these truths, leading his reader through each one in turn enabling the step-by-step comprehension of them as traditionally taught in Buddhist countries. Following on from the four noble truths the book covers a commonly misunderstand aspect of the Buddha's teachings: anatta, or not-self. Here, the author goes to great pains to establish exactly what the Buddha meant by anatta, which is often different to what many commentators think. This is done in some detail, and the reader new to Buddhism may find this chapter a little hard going in places as a result, but subsequent readings (and experience) will no doubt help to make this difficult section of the book clearer.

A strength of What the Buddha Taught is that despite its emphasis on what the Buddha taught, it does not shy away from the techniques he developed to put the Buddhist teachings into practice. This is especially true in the chapter that covers meditation, also referred to as 'mental culture' by Dr. Rahula. In it, he acquaints the reader with anapanasati ('mindfulness of breathing'), the central meditation method found in the Pali Canon. Another important aspect of this mental culture is to develop mindfulness in all our actions, including those we might consider 'secular' or insignificant. Not only techniques but teachings for reflection during meditative mind states are included, such as the five hindrances and the seven factors of enlightenment.

In the final chapter of the book, Dr. Rahula discusses the role of the Buddha's teachings in the modern world. And, despite being originally published in 1959, the author's insights still ring true today. An interesting section of this chapter is where the author explores the Buddha's teachings regarding the perfect king, and uses this as a template for modern world leaders. If only the prime ministers, presidents & the like would take heed of these teachings, what an improvement in international relations there would be! Us ordinary folk aren't spared the Buddha's wisdom here, however; What the Buddha Taught contains priceless advice for our everyday lives too.

In summation, then, in this book Dr. Walpola Rahula has given the world a wonderful introductory resource to the Buddha's teachings. It is also a work that is worthy of returning to again and again as a stimulus for deeper reflections. This reviewer cannot recommend highly enough, for whatever faults it may contain - and all conditioned things are imperfect - What the Buddha Taught has much to inspire its readership. And for that, not only should we grateful to the Buddha, but also to Dr. Rahula, who skillfully condensed the essence of the Buddha's teachings into such a fantastic little book.

For a free pdf copy of the above book, minus the section of translated texts, please click here: What the Buddha Taught. Many thanks to the people at the Charleston Buddhist Fellowship for their meritorious deeds in supplying us with this wonderful resource.

Thanks for this, and I found a copy in Myanmar.
A splendid concise book....I wish I had this when I started. A keeper along with Ajahn Chah's books.

Some books just ooze Dharma, and this is one of them; not surprised to read that you found a copy in Burma. It's recognized as something of a classic the world over, methinks. Along with Ajahn Chah's more practical teachings, it makes an excellent reference work for basic Buddhist teachings & practice.