Trying to grasp one’s self from the outside may be likened metaphorically to a snake trying to swallow its own tail. When the snake bites its tail, it makes a circle. And the more it tries to swallow its tail, the smaller that circle becomes. When the snake carries this effort to swallow its own tail to its final conclusion, the circle turns into a small dot, until finally it must disappear into emptiness. In more concrete terms, the snake must die through its effort. As long as the human self tries to take hold of itself through self-consciousness (out of which feelings of inferiority, superiority, etc. develop), the human ego-self falls into an ever-deepening dilemma. At the extreme end of this dilemma, the ego can no longer support itself and must collapse into emptiness. When the attempt of self-consciousness to grasp itself is pressed to its ultimate conclusion, the human ego must die. The realization of no-self is a necessity for the human ego. Some individuals only come to realize the necessity of confronting this dilemma on their deathbed. Others may existentially intuit the need for resolving this dilemma while still quite young, and thus embark on a religious quest. In any event, the realization of no-self is a “must” for the human ego. We must realize that there is no unchanging, eternal self.

Then for the first time you understand the familiar Zen phrases: “Willows are green, flowers are red,” or “The eyes are horizontal, the nose is vertical.” Trees, birds, fish, dogs or cats – from the beginning they always enjoy their suchness. Only man has lost that suchness. He is in ignorance. Therefore he does not know the reality of human life and becomes attached to this life and fears death. But when ignorance is realized for what it is through the realization of no-self, one may waken to “suchness,” in which everything is realized in its uniqueness and particularity.

The above is an extract from the excellent book ‘The Buddha Eye’ edited by Frederick Franck, published by World Wisdom. Abe Masao was an author & professor of religious studies in both Japan & America, and was a close associate of D.T. Suzuki.
Posted by G at 12:00 AM No comments:

The evil-doer suffers here and hereafter;
He suffers in both worlds.
The thought, “I have done evil,” tortures him,
And he suffers even more when gone to realms of woe.

The doer of good delights here and hereafter;
He delights in both worlds.
The thought, “I have done good,” delights him,
And he delights even more when gone to realms of bliss.

The first two lines of verses 17 & 18 of the Dhammapada both emphasize the Buddhist teaching of karma (action) and its results. Rather than repeat what’s been written in the previous reflections of verses 15 & 16, suffice to say that wholesome actions will have wholesome results and unwholesome actions will have unwholesome ones. This is the basic Buddhist teaching on karma & its results (vipaka) accredited to Buddha. Again, the previous article (Dhammapada Reflections #7) focused on the psychological implications of the results of karma, represented here with the thoughts, “I have done evil” and “I have done good” in the current verses. That our actions can inspire regret & grief, pride & joy won’t surprise many, so this aspect of the above verses won’t be elaborated on here.

The key term that relates to the results of our actions that this article will attend to is the term ‘suffering.’ Suffering is the common English translation of the Buddhist term dukkha, which actually has many connotations that the word ‘suffering’ doesn’t really cover. Dukkha also means angst, pain, unsatisfactory, imperfect, stressful, anxious & discontent amongst others. It’s worth noting that Buddha is said to have stated that, “I have taught one thing and one thing only, dukkha and the ending of dukkha.”

Buddha saw dukkha as the primary problem in existence, and he sought a way out, which he is said to have found. This is called nirvana, ‘snuffing out (of the causes of suffering),’ or bodhi, ‘awakening.’ Related to bodhi is the title buddha – ‘awakened one.’ Buddhist teachings & practices exist to reduce & eventually eliminate dukkha. Knowing this, the claim in verse 17 that the evil-doer suffers due to his or her actions becomes even more worthy of our investigation. There’s a sense in which we all accept the idea of karma & its results in that we can see the consequences of our actions. If I speak nicely to you, I will surely receive a different response than if I were to kick you! This is what John Lennon called ‘instant karma.’

The phrase “gone to realms of woe” can be understood in this immediate way, too. If I were to kick you and you beat me to a pulp in retaliation, then I’d certainly be in a realm of woe. And, this sorrowful situation would be of my own making. It would be karma-vipaka – the results of my actions. Silly me!

The Dhammapada ('Verses of Dharma' or 'Path of Dharma') is an ancient Buddhist text that is said to contain some of the Buddha's teachings in poetic form. The first chapter is called Yamakavagga, 'Chapter of Pairs,' and the above two verses are from this part of the book.
Posted by G at 12:00 AM No comments: 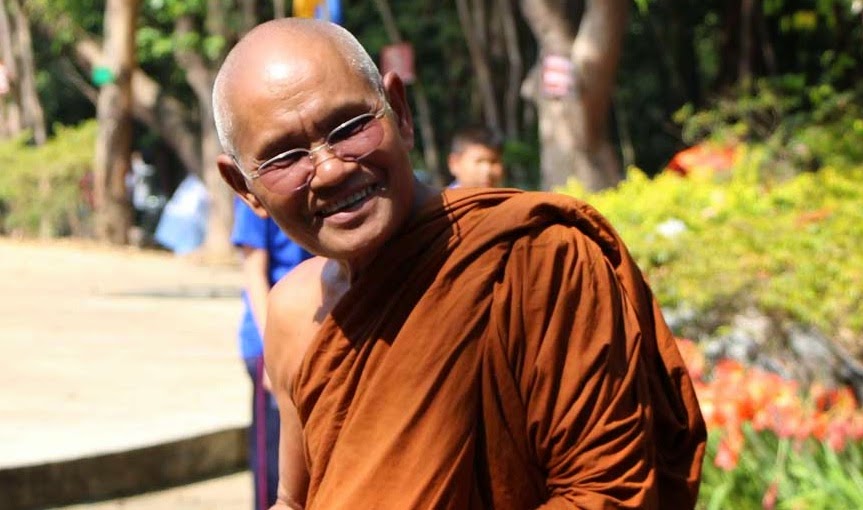 Usually, in our behaviour we start off with our emotions, letting them lead us, just like the people out in the world who think their moods are what count. But emotions and moods are illusions that swindle. They are tricky. Sometimes they take us on a good path, sometimes on an evil one. Following our moods easily turns to our disadvantage.

We should take superior states of mind rather than moods and emotions as our guide. Why not let being the One who is called “Awakened” and “Blessed” lead us? Let “Buddha” walk in front of us. Let “Buddha” be the essence to take us along. Let “Buddha” be our guideline. Whatever we come to do, there will always be moods, but our practice is to let “the One who knows”, the qualities of awakening and knowing lead us. In this way eventually there is no danger. There are no drawbacks with these mind states. We are on the watch.

Let the various moods and emotions that come up simply be as they are. In this way we train really to be with ourselves. We train this very self to sit and really be there, to stand and be really there, to walk and really be there, until always, in whatever changing posture, we can be called fully aware. We are fully there through our peace. It’s different from being on top of our experience through getting carried away with pleasures and having fun. Instead, being fully up to life comes from peace of heart. If there is peace, we are in a state where we can adjust to anything that comes up, so we can always be in the appropriate mode. We see things correctly and have right understanding because the mental impulses (sankharas) are quiet. There are no proliferations. We feel the sankharas at peace. With all the kinds of opinions that could come up, we won’t start arguing.

When relating to the world and society, those who are intelligent, understanding and have a feeling of peacefulness will praise us. But should they praise us, we don’t get happy because of it. We don’t get infatuated with it. Ultimately, the praise of someone is just a product of the delusion of the one who expresses it. Just that much. We don’t have feelings of like and dislike. Praise is just what it is. We don’t feel that we need to foolishly run after it. We don’t want to get on the track of being a slave. If we maintain peace, there is nothing that can do harm to us. Even if others should blame, criticize or condemn us, making us subject to suspicions out of enmity, we nevertheless have peace. We have peace towards the anittharamana, the mental states we don’t wish to have, which don’t go according to our likes. Even they can’t cause us harm and be disadvantageous. Should someone criticize us, it’s just that much. Eventually it all dissolves by itself. It flows away in it’s own specific way. This is where the lokadhamma can’t dominate us, since we have nothing but peace in our hearts.

When standing, when walking, when sitting, when sleeping and when getting up, this is it. If we deal with society, and with things in the world around us, we can relate in a way that is of benefit for all. We don’t go astray and drift away. We behave like one who can let things be. We behave like samanas, like anagarikas (homeless ones), who are not bound up. This is the way we train. Training ourselves like this is really peaceful. We make peace arise all the time. Whenever we are in society, we will always have smoothness and tranquillity.

The above is extracted from the book ‘From the Darkness to the Light,’ which is freely downloadable here. Ajahn Liem has been a Buddhist monk since 1961, and is abbot of Wat Nong Pa Pong, a renowned Buddhist forest monastery in Northeast Thailand. He studied under the famous meditation master Ajahn Chah, and has taught Buddhism to monks & laity across the world.
Posted by G at 12:00 AM No comments: