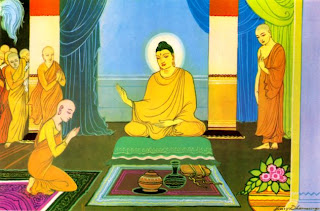 If the Buddha accepted bhukkhunis, can't we?

According to Buddhist tradition, the Buddha established both an order of monks (bhikkhu-sangha) & an order of nuns (bhikkhuni-sangha). Admittedly, ancient Buddhist texts claim that he was reluctant to do so, claiming that Buddhism wouldn't last as long as it otherwise would have because of women's ordination, but he did nevertheless acknowledge that women are as capable as men when it comes to realizing nirvana, the ultimate end of the Buddhist life. And, in the same Buddhist texts, enlightened bhikkhunis appear throughout its pages, supplying us with examples of why an order of nuns is of value. Not that enlightenment is restricted to monks & nuns in Buddhism, but it is generally accepted that the life of a renunciate is much more conducive to achieving nirvana. Whatever the case, Buddhism is very much still alive today, and there are people intent on realizing 'the deathless' through living the ordained life. There is a problem here, however, for in some Buddhist traditions, the order of nuns has died out, and there is extreme resistance to reestablishing it.

In many countries adhering to the newer Mahayana Buddhism, such as China & Vietnam, fully ordained Buddhist nuns survive, in places like Sri Lanka & Thailand, where the older Theravada Buddhism prevails, no bhikkhunis can be found. This is because in the case of Sri Lanka, the order of nuns is said to have died out several hundred years ago; in Thailand, it is widely accepted that the bhikkhuni-sangha was never established in the first place. It is natural for the urge for enlightenment to arise in the hearts of women as well as men, so in both countries unofficial nuns are tolerated: dasa sil matha in Sri Lanka and mae-chi in Thailand. Neither of these are given the honor and status that monks are in these countries, however, and women that do take up such disciplines face hardships and obstacles that the monks do not.

Some radical groups in Sri Lanka and Thailand have started ordaining women as fully ordained nuns, and two well known bhikkhunis are Venerable Bodhicitta in the former and Venerable Dhammananda in the latter. Both were ordained in Sri Lanka, with the latter returning to her native Thailand to set up a nunnery there called Wat Songkhammakalayani. Whilst receiving some enthusiastic support, such nuns are yet to be accepted by the Buddhist hierarchy in either country, however, organizations 'manned' by monks. It would appear that male renunciants do not want to see their female equivalents, and are determined to keep women in their place, as merit-making supporters of the monks. This is surely a narrow-minded view, with little compassion for women wishing to live the enlightened life, potentially sharing it with all they encounter.

There are other, less controversial efforts to revitalize women's spiritual roles in Theravada Buddhism, however. Within the constraints of the mae-chi tradition in Thailand, for example, there is small movement of novice nuns seeing interest from young girls and their parents. These girls, some as young as five, take temporary ordination during the school holidays, in much the same way as boys do within the bhikkhu-sangha. This is a fledgling development within Thai Buddhism, however, and mae-chi remain widely ignored by the majority of Thai Buddhists, as the merit gained by giving alms to them is considered less valuable than if given to fully-ordained monks.

In the west, the widely-respected forest sangha which began in Thailand under the guidance of the Thai bhikkhu Ajahn Chah, has long had female renunciants. These are not bhikkhunis, though, but are something like glorified mae-chi, called 'siladhara,' following ten precepts and not the three hundred plus rules of fully ordained nuns. The siladhara were started by Ajahn Sumedho, a famous American Monk who trained under Ajahn Chah, and a small number of them are sprinkled across the globe in various Buddhist nunneries. For some years there have been complaints that nuns should have parity with their male counterparts, and siladharas do not fulfill this aspiration in the eyes of many. Ajahn Brahm, a popular British monk in Australia, permitted the full ordination of four bhikkhunis in his monastery, Bodhinyana. This resulted in Ajahn Brahm and the monastery being 'disassociated' from the Ajahn Chah movement back in Thailand by senior monks there.

As Buddhism has moved through Asia over the last two-and-a-half thousand years, it has changed to suit local needs and traditions. This is most clearly illustrated by the wide variety of schools found in Mahayana Buddhist cultures, such as Pure Land, Zen and Tibetan forms of Buddhism. And even within the more conservative Theravada Buddhism, there are differences between its forms found in Sri Lanka, Burma & Thailand. That nuns still exist in some Mahayana schools should be an encouragement to those modernists with Theravada Buddhism to push forth with the reestablishment of the bhikkhuni-sangha. Indeed, Mahayana nuns are crucial to this movement in its early stages as they can fulfill the need for at least five fully ordained nuns to be present at the ordination of new nuns. A thriving world community of meditating nuns intent on nirvana can only enrich Buddhism, as well as continuing the Buddha's own acknowledgement that they have a right to exist. More nuns please, we're Buddhist!

For more on this issue, please read the following post: No Nuns Please, We're Buddhist!
Posted by G at 12:00 AM

The shear act of disapproval by the Thai Sangha, only points to the inequality of women in Thailand. They are good for something, like feeding those that are responsible, because few men do it in comparison.
I recently visited a Nun's Temple in Tangalle, Sri Lanka, and was pleased when I van showed up with many people and food for the three Bhikkunis that resided there. Let me know if you want me to send photos.
I still think that men won't save the world, and that women have their feet firmly on the ground of consciousness and keep this world from spinning into all out war.(opinion) Supporter of Saranaloka.org

Yes, having lived in Thailand for many years, their thitd-rate status (behind that of men & boys) is most apparent. Only girls have a lower status.

Nowhere in the world is perfect on this score, but coming from the West, it can be a shock to witness how women are viewed & treated here. They are brainwashed from birth to accept this situation, and are, therefore, resistant to change themselves.

Unfortunately, women in Buddhism are not immune from such discrimination. But, there are glimmerings of change, and as the Buddha taught all things are impermanent, the situation can improve.

Feminism is a worthy cause but right now it is a cultural swing among other popular causes. We have to keep in mind where there are thoughts, there will be fear. When thoughts subside, there is no fear.

Yes, Anonymous, meditation & mindfulness have much to teach us. And as part of the noble eightfold path, lead us to awakening. Combinimg them with worthwhile causes - such as giving women equal opportunities within Buddhism - can only benefit society.

This video is a good sign of equality breaking through dogma. http://youtu.be/RhA7RU78mAw