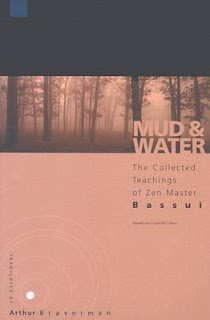 Bassui Tokusho (1327-1387) is not a very well known zen master - but he should be! Arthur Braverman has done Buddhists the world over a great service by translating & editing Mud & Water: The Collected Teachings of Zen Master Bassui, for in it, we have the words of an enlightened monk that are as relevant today as they were when first produced over six hundred years ago. Moreover, in his words Bassui instructs us with a directness that can inspire more than just intellectual appreciation at his rhetorical skills. He pushes us to realize enlightenment right here, right now. When he addresses his followers on his deathbed, his words reverberate through the centuries, teaching us in the twenty-first century:

The book is divided into five main sections: four parts consisting of translations of Bassui's teachings preceded by the wonderful introduction, written by Braverman. In the introduction, he relates the basic facts, as far as we have them, about the life, enlightenment, death and teachings of Bassui, putting the following four parts of the work into perspective. Not that this is necessary to grasp the essential meaning of the book - seeing our true nature -  for this shines forth from Bassui's words as clearly as it can. But more on this a little later. As far as the introduction goes, we discover that Bassui was an extraordinary zen master, one that was both rebellious enough to reject empty rituals and philosophizing, but also wise enough to emphasize the importance of the Buddhist precepts. Braverman writes of Bassui:

"Cautioning against thinking of the precepts as mere warnings against inappropriate outward behavior, he continues: 'The true meaning of the precepts is that one should refrain not only from drinking alcohol but also from getting drunk on nirvana.' Although he found this deeper meaning in all the precepts, he was strict about keeping these precepts outwardly, too. With this restriction against alcohol, Bassui went so far as to have a shrine built at Kogakuan with a deity called Basshushin: the God of Retribution for Drinking Alcohol."
(Ibid. p.13)

The focus of Bassui's life was to find out who was actually living it. He travelled across fourteenth century Japan - a time of military conflict & political upheaval - meeting zen masters that might help him to discover & deepen his understanding of his true nature. In his childhood he began this search when seven years old at his father's funeral, later discovering an answer in meditation. Early in his monastic life he refused to wear monk's robes and did not take part in the daily rituals of the temples, preferring to live in hermitages, focusing on meditative practice. At the age of thirty-one, he had an enlightenment experience when hearing the sound of a trickling stream, a realization later confirmed by the zen master Koho Kakumyo (1271-1361). Being unconventional and unconcerned with the continuance of lineages, Bassui retained his hermit lifestyle, eventually gaining many followers that came to study Dharma with him. He became their master, until his death at the hermitage at the age of fifty.

The book contains a complete translation of Enzanwadeigassui-shu (A Collection of Mud and Water from Enzan), a partial translation of Kana hogo (Dharma Talks in Japanese), and Kambun hogo (Dharma Talks in Chinese), which are predominately Bassui's replies to questions put to him in the later part of his monastic career. His responses are often witty and to the point, but never flippant or evasive. Indeed, when responding to queries requiring more detailed answers, Bassui does so with a keen mind. The last part of the book are letters written by Bassui to his followers, advising them on various areas of Buddhist practice, but always with his familiar emphasis on seeing true nature. To give a flavour of this wonderful zen master's style of wisdom, we will end this review with a series of extracts from the book; one from each part. Suffice to say, Mud & Water is thoroughly recommended by this reviewer, not only as a source of Buddhist teachings, but as a Dharma gate to enlightenment. Read and be awakened!

"Someone asked: 'To the mundane world, fasting is refraining from eating for periods of a week, two weeks, up to one hundred days. Is this a way to Buddhahood?'
Bassui responded: 'Fasting does not mean refraining from the formal eating of food. It means refraining from feeding on the roots of delusional. Fasting means looking into your own nature and illuminating your consciousness, cutting off deluded feelings arising from analytical thinking, remaining apart from external phenomena and unattached to the internal void, completely purifying yourself so that things with no more than a thread of meaning become nonexistent in your life.'"
(Ibid. p.48)
"If you truly want to read the sutras, you first have to awaken the mind that reads. All formal readings from the sutras are ultimately destructive. The wonderful Dharma of one's mind does not change through successive aeons; it is the essence of all the sutras. If you want to comprehend this essence, you should know that the voices of frogs and worms, the sound of wind and raindrops, all speak the wonderful language of the Dharma, and that birds in flight, swimming fish, floating clouds, and flowing streams all turn the Dharma wheel. When you see the wordless sutra only once, the sutras of all the heavens with their golden words, which fill one's eyes, clearly manifest. If you read the sutras with this kind of understanding, you will never be idle throughout endless aeons."
(Ibid. pp.104-105)
"Questioner: 'When we listen to all kinds of sounds, we are supposed to look penetratingly into the one who is listening. What if there isn't even one sound?'
Bassui: 'Who is it that doesn't hear?'
Questioner: 'I have no doubt as to the one who is listening to the Dharma.'
Bassui: 'What is your understanding?'
The monk was silent.
Bassui spoke reprovingly: 'Don't spend your life sitting in a ghost cave.'
(Ibid. p.163)
(To a Dying Man)
"The wondrous mind-nature is not born and it doesn't die. It neither exists nor is it nonexistent. It is neither formless nor does it have form. It feels neither pain nor pleasure. Though you want to know what it is that suffers now, in this way, it is something that can't be known. If you just question what is this mind-body that suffers, thinking of nothing else, wishing for nothing else, and asking for nothing else, like a cloud disappearing form the sky, your mind will empty and you will cease transgressing the world of life and death and be immediately liberated."
(Ibid. p.200)


The above book is published by Wisdom Publications, and is available from their website at:
Mud & Water
Posted by G at 6:41 PM

what does it mean bassui meant the term drunk in nirvana? does that means that when you became a buddha still clinging in ethics? i mean too legalistic and obsess in morality than a raft to be abandoned when finally ended its use?

what does he means regarding sutras manifest golden heaven?

Hello Anonymous. I don't profess to understand every word of Bassui, but as long as we remember that everything he taught was done so with seeing true nature in mind, we won't be far from his meaning.

By "getting drunk on nirvana," he seems to mean not getting so caught up in the liberating feelings that accompany the process of awakening that we abandon ethical behaviour altogether. (If we fully realize nirvana, there's no-one left to be unethical! In traditional Buddhist teachings, when we realize nirvana, we don't abandon ethics upon enlightenment because the natural expression of an enlightened being is in line with Buddhist ethics automatically.)

"The sutras of all the heavens with their golden words" seems to be a colourful (poetic) way to refer to the teachings in the Buddhist sutras; as far as I read it, this phrase doesn't mean that the sutras manifest "golden heaven" - but I could be wrong!

Anonymous, I seriously advise you to buy the book and read it...that way you will benefit from it to the utmost!

G, does this mean that once person is enlightened he think all things is part of his ie i mean everyone of us including the edge of the universe is one phenomena so an accomplished being is unable to do harm to others because he is part of everything? interconnected by one Mind?

You can put it that way, if you like, which I have at times to try to explain what is essentially beyond words. But it seems a somewhat intellectual formulation, unless it's coming from an enlightened mind, that is.

Bassui wants us to see our true nature first, then consider such issues, if we wish. And this is the beauty & power of his teachings, to push us to the point where we see what he is talking about, not merely think about it. Thank you, Bassui!