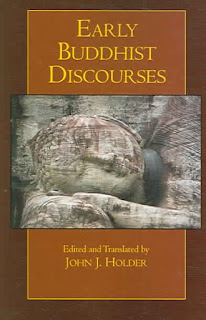 "Early Buddhism declares a way to liberation and happiness despite the precarious and changing nature of the world, and does so without falling back on a transcendental realm of security or a saving God. Instead of metaphysics or theology, early Buddhism focusses on the training of human character in terms of moral conduct, mental culture, and wisdom."
(Early Buddhist Discourses, p.xii)

Early Buddhist Discourses by John J. Holder is a fine introduction to the teachings of the Buddha found in the Tipitika, or Pali Canon. It contains twenty discourses attributed to the Buddha and found in the Sutta Pitaka section of the Canon. (The Pali words sutta & pitika approximate to 'discourse' & 'collection,' respectively.) With these texts, which Holder has translated & edited, the basic ideas of early Buddhism are introduced, including the four noble truths, the three characteristics, dependent arising, and no-self. An interesting thread that runs through these translations and Holder's comments on them, is the early Buddhist understanding of consciousness as an impermanent phenomenon, dependent upon the senses for its existence.

The author begins the book by setting the scene for the composition of the Pali Canon, which he does with clarity and brevity. He notes the prevailing Brahmanical culture in which Buddhism arose, and the life of the Buddha as described in the Tipitaka. Moreover, he discusses the Buddha's teachings in philosophical terms, focusing on Buddhist empiricism, the four noble truths and a succinct account of the noble eightfold path. He contrasts these elements of Buddhist thought with that of Brahmanism, showing how radical early Buddhism was in its teachings of no-self and dependent arising. On this subject, Holder writes the following:

"The doctrine of dependent arising directly challenges the metaphysical worldview of the Brahmanical tradition. Whereas the sages in the Brahmanical tradition agreed with the Buddha that the world of normal human experience is changing and ephemeral, they posited a transcendent, changeless, monistic, Ultimate Reality (Brahman) that stands behind the changing world. The highest spiritual truth in Brahmanism - what the sage tries to realize - is that all existence ultimately has its source in the changeless One, and that the essence of the person (atman) is identical with this One.
The Buddha explicitly rejected the Brahmanist transcendental metaphysics. According to the Buddha, all phenomena are dependently arisen. Everything that exists is a nexus of causal factors. Thus, all phenomena are impermanent; they arise at some point in time and cease to be at another point in time. In light of this, the Buddha did not resort to transcendental or unchanging realm beyond this world of change."
(Ibid. p. xv)

Holder puts much focus on dependent arising (paticcasamuppada), choosing to include several discourses that focus on it. This is because, as he states in the quotation above, it is the Buddha's response to traditional religious answers to questions about what life is & what we are. In his introductory notes to Chapter 3: The Great Discourse on Cause (Mahanidana Sutta), Holder explains how dependent arising explains that there is no-self (or no-Self as he chooses to render the Pali term anatta). He remarks that it is a middle way between the extremes of "Absolute Reality (e.g. the Hindu "Brahman") and metaphysical nihilism." (Ibid. p.26) He also notes something not found in most works on the subject, that two aspects of dependent arising condition each other, whereas all the other elements in the chain are conditioned in a sequence. The two are psycho-physicality (mental and bodily processes) and consciousness, as explained in the words of the Buddha:

Chapter 7 contains five short discourses from the Samyutta Nikaya division of the Sutta Pitika, each of which Holder carefully chose to illustrate a specific aspect of the Buddha's teaching. The first of these is the Discourse to Kaccayana (Kaccayana Sutta), which Holder believes may be the most important metaphysical discourse in the entire Tipitika. In it, The Buddha describes the middle way between the extremes of "eternalism" and "annihilationism," which is, again, dependent arising. Another sutta in this chapter is one that does not feature the Buddha, but instead has an enlightened nun, Sister Vajira as the teacher. Here, she rejects the attempts of Mara (the Buddhist personification of evil or ignorance) to get her to admit that there is a Self. Instead, the nun declares:

"Just as the word 'chariot'
Refers to an assemblage of parts,
So, 'person' is a convention
Used when the aggregates are present."
(Ibid. p.87)
In such declarations, the reader is presented with the opportunity to reflect on their reality, seeing for her or himself whether they are true. In such investigations, there is the opportunity for awakening or enlightenment, especially if accompanied by meditation practice. Although none of this is stated by Holder, it is inherent in the translated texts themselves. Therefore, Early Buddhist Discourses is not only a fine introduction to the basic teachings of the Buddha as found in the Pali Canon, but it is also a sourcebook for the reader's reflection, leading to the development of wisdom.

So, in conclusion, John J. Holder's book Early Buddhist Discourses is an important work. From both scholarly and philosophical views, it supplies the reader with all the material required to understand the basic Buddhist concepts such as the four noble truths, no-Self, and dependent arising. This is due to the skill and knowledge of the author, and in doing so he has produced translations of clarity and significance, accompanied by his relevant and insightful comments. This work comes highly recommended, for scholars, philosophers, and the general Buddhist reader. What's more, if we are attentive enough, it is possible to apply the teachings contained in it and realize enlightenment: