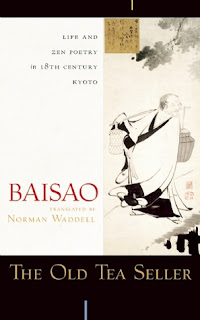 Zen Buddhism is notorious for its eccentric characters, monks. nuns, and laypeople that appeared not a little loopy as well as wizened. And Baisao, the subject here of Norman Waddell's excellent study, is one of the most unique of Zen masters. Waddell provides his reader with all the information available, presenting the life & teachings of Baisao in their historical context. He follows this part of the book with a translation of all the published poetry & prose of Baisao, as well as some 'holograph texts.' Following this, is an extensive set of notes that possibly only the specialist may make a thorough exploration of; but interesting nonetheless to all those bar the most casual of readers. Here's a taste of Baisao's verse called Brewing Tea at Koda-ji, as rendered by Waddell:

"Trudging slowly up
the long stone steps
to old Kodai-ji
through a world of
rust red maples
unfolding like a scroll;
come to brew tea
with water dipped
from the fabled
Chrysanthemum Spring
just one cup
I now know
clears things up
for all time"
(The Old Tea Seller, p.42)

Baisao is a self-awarded name meaning 'old tea seller,' a title that the subject of this book adopted because of the profession he took up late in life. Baisao (1675-1763) took to tea selling after living many years as a Zen monk, staying in several different monasteries in Japan, in his native land. According to Waddell's narrative, Baisao was never a conventional monk, and even declined to be abbott of his master's monastery when the latter passed away. Instead, at the age of 49, he decided to open a tea shop in Kyoto, and then become an wandering tea seller, handing out cups of the beverage to whoever wanted one, whether they paid him or not. Waddell writes:

"At the age of sixty, Baisao was earning his livelihood selling tea at a tiny rented house in Kyoto. He called his shop Tsuen-tei, "the shop that conveys you to Sagehood," a name that by extension became one of his own sobriquets as well. The shop, which may have been merely a stall (he speaks of it as a "snail dwelling"), was situated at the heavily trafficked Second Fushimi Bridge on the eastern bank of the Kamo River…Baisao was thus guaranteed a fairly steady flow of potential customers."
(Ibid. pp.20-21)

Due to the minimal donations that he received for his tea, Baisao lived an ascetic life, with few possessions and often not enough to eat, hence his somewhat skeletal appearance in portraits of the man. This is reflected in some of his poetry, but the overall sentiment that oozes from his verse is that of the joy coming from an enlightenment person, which many Japanese Buddhists consider him to have been. His poetry appears to have been even more popular than his tea, with many students of poetry as well as Zen coming to talk with this peculiarly wise old man. He also exchanged letters with associates and wrote a brief history of tea in Japan, all of which are included in The Old Tea Seller. Here's another taster of his poetry entitled Brewing Tea on a Visit to Tofuku-ji:

"Pine trees rise through cloud
soar into the blue skies
bush clover, spangled with dew drops
sways in the Autumn breeze;
As I dip cold pure water
at the edge of the stream,
a solitary white crane
comes lolloping my way."
(Ibid. p.134)

Waddell is a skillful translator, and has displayed his talents in other works such as The Essential Teachings of Zen Master Hakuin, The Religious Art of Zen Master Hakuin, and Unborn: The Life and Teachings of Zen Master Bankei. Contemporaries of Baisao, but more famous by far, both Hakuin & Bankei led lives more in line with conventional ideas of how a Zen master lives. In translating Baisao, Waddell has exposed the English-speaking world to another great in the history of Japanese Zen. Moreover, Baisao is the kind of Zen master, first as a monk, then as a layman tea-seller, that can speak to the modern reader, in ways that mopper conventional teachers perhaps cannot. (To be fair to Bankei, he was a one-off, too, but then there are some interesting stories about Hakuin as well!) What follows are droplets of Baisao's simple wisdom called Instructions for the Zen Nun Kansho:

"The clear waters of the Sea of Truth, originally tranquil,
roiled into waves by the passions can blot out the sky;
Turn within, see your nature in its original suchness,
Where your intrinsic radiance is immediately manifested."
(Ibid. p.167)

In this book, Norman Waddell has revealed a true gem of Buddhism: the wisdom of an old tea seller. Baisao's life is an inspiration to us all to live in line with Buddhist truths whatever our occupation; we do not need to be monks or nuns hidden away in a forest or mountain cave to see our true nature & live in accordance with it. As his own life illustrates, however, this is not always easy - but it is certainly worthwhile. Thanks to Waddell's extensive research and sensitive translations, English readers can now sip this wisdom, as refreshing as a cup of Baisao's tea. And, if we really savour it, we just might be as enlightened as he was!