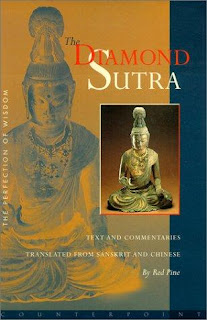 Red Pine has produced some excellent translations of Buddhist texts, and The Diamond Sutra: The Perfection of Wisdom is no exception. It is a superb companion to other such works by the American scholar, which include translations of The Heart Sutra and the Lankavatara Sutra. Reading this particular book is a pleasure on several levels. As one of the most important pieces of scripture in Mahayana Buddhism, it is a source of great wisdom. As a an example of fine translation work on the part of its translator and commentator, it is also a wonderful read. Moreover, as a work to dip into and be inspired by the wise utterances of some of the great thinkers of Mahayana Buddhism, it is a thought-provoking (and enlightening) book.

The Diamond Sutra is one of the central texts in Mahayana Buddhism, and is particularly important in Zen Buddhism, and is not only widely studied but also chanted in Zen monasteries & temples the world over. To give it its proper full name in English, it is the 'Diamond Cutter of Perfect Wisdom Discourse,' or Vajracchedika Prajnaparamita Sutra in Sanskrit. It takes the form of a dialogue between the Buddha and his disciple the Venerable Subhuti, and is a discussion on the nature of perception, non-attachment and non-abiding. Much of this is undertaken via an apparently somewhat contradictory set of statements by the Buddha, through which he leads Subhuti towards an understanding of enlightenment.

So, succinctly put, the sutra is about emptiness…or is it? In the translator's Preface to the book, Red Pine rather amusingly recites his own journey of understanding of the Diamond Sutra - or journey of misunderstanding, at least for many years! For, as he recalls, it was only when he came to translate the text for himself, along with the commentaries that accompany it in this edition, did he begin to grasp its meaning. Moreover, it was by studying the Sanskrit version as opposed the Chinese versions he was previously familiar with that the author finally began to penetrate to its particular message. For, while emptiness and the other important factors above are part of the sutra, they are also found in other Buddhist scriptures. According to Red Pine, the Diamond Sutra is really about the body of the Buddha and those of his noble (enlightened) disciples.

"From the beginning of this sutra, the focus has been on the Buddha's body. But which body? It has sometimes seemed like the Buddha has been playing the old shell game with Subhuti: Now you see me, now you don't. Under which shell is the real buddha? As early as Chapter Five, the Buddha asked Subhuti if he could see he body, and with this koan he began Subhuti's education in the perfection of wisdom. Obviously, the Buddha was not referring to his physical body, whichh Subhuti knew was en\mpty of any self nature and merely an apparition. But to which body was the Buddha referring?"
Ibid. p.401)

This edition of the Diamond Sutra begins with a 27-page translation of the text itself, which is clear and attractive, without too many elongated words to disrupt the flow of the discourse. This is followed by the Translator's Preface, already mentioned above, which is both interesting and informative, engaging the reader with the sutra's meaning and Red Pine's own unravelling of it. This short section precedes the bulk of the work, which is a line-by-line commentary of the Diamond Sutra, in which the translator weaves its history, philosophy, and the related teachings of some of China's greatest Zen (nee Chan) masters.

"Chu-kung says, 'Dharmas originate in the mind. Only someone who possesses wisdom can transform and understand them. Thus, there are no actual dharmas that we can talk about or name.'
Chiang Wei-nung says, 'A tathagata is the embodiment of a dharma, and a dharma body has no form. What is there to conceive? What is there to express?'
Hui-neng says, 'Unexcelled, perfect enlightenment is not found somewhere outside. It only exists when the mind contains neither subject nor object.'"
(Ibid. 133-134)

Red Pine, with his usual skill, takes a line of the original text and then extrapolates from it the deeper meaning, with the help of a profusion of great Chinese Buddhist teachers. This gives a multilayered feel to the sutra's overall thrust, allowing the reader to savor each of its chapters to the utmost. The value in this approach is that although Red Pine never shies away from showing his hand when a particular idea or interpretation is primarily his own, the reader is never left feeling that the work as a whole is merely one man's understanding, but is rather a whole tradition's exposition. This can be seen in the following extract, which is given in its entirety and is therefore somewhat lengthy, but to edit it would misrepresent Red Pine's methodology.

"On this occasion, the venerable Subhuti was also present in the assembly.
Depending on how the word subhuti is parsed, it can mean 'born of emptiness' or 'auspicious sight.' Although Subhuti's family possessed great wealth, on the day he was born all the gold and silver in his family's storeroom disappeared. Thus, he was born of emptiness. Then, seven days later, his family's gold and silver reappeared. Thus, his birth was also an auspicious sight. Looking back on this event, commentators muse that the disappearance of his family's wealth demonstrated the truth of emptiness, while its reappearance demonstrated that true emptiness is empty of emptiness.
Subhuti was born in the city of Sharvati and became one of the Buddha's ten most prominent disciples. As his name foretold, he was known for his understanding of the doctrine of emptiness. Thus, it was appropriate that he assumed the role of the interlocutor for the assembly on this occasion. He was, however, quite elderly, and not always present when the Buddha spoke. According to a later tradition recorded in Hsuan-tsang's Hsiyuchi (Buddhist Records of the Western World), Subhuti was the Blue Dragon Buddha of the East and joined the Buddha's assembly in this form to assist in instructing others about prajna.
Chiang Wei-nung says, 'The Bhagavan put on his robe and begged for food every day. He did not always speak afterwards. He only spoke when the time was ripe. This, in truth, was a rare occasion. It was the ninth time the Buddha spoke about prajna. Thus, it was 'on this occasion.''
Hui-neng says, 'Why was he called venerable? Because he was esteemed for virtue and also advanced in years.'"
(Ibid. pp.58-59)

The above extract reveals Red Pine's eye for detail, explaining it does in some detail the etymology of the word subhuti, and its relevance to this work.  Other terms and ideas - many much more lofty than this one - are treated with the same devotion throughout the book, and are also accompanied by comments from both Chinese Buddhist masters and some of their Indian predecessors. The combination of the fine translation that Red Pine has done of the sutra itself, along with the wise words from the masters, make this a book capable of helping us to awaken to the Buddha in this very life. Reading The Diamond Sutra and deeply reflecting on it is a real opportunity to realize enlightenment, and is therefore a truly wondrous work to hold in our hands.

Great review of a great book. One of the Chinese commentaries therein has been translated into English since Red Pine's translation was published: http://www.amazon.com/Diamond-Sutra-Explained-Nan-Huai-Chin/dp/0971656126/
The late Master Nan Huaijin's "Diamond Sutra Explained." Highly recommended also.

Thank you for your compliment, Anonymous and for the referral to Huaijin's commentary.

Really good advice!!! Thank you for the valuable information on this tips.
https://blog.mindvalley.com/diamond-sutra