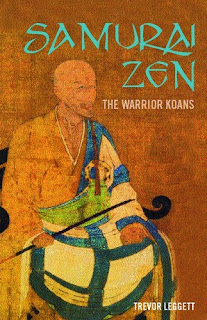 Collections of Zen koans - those bizarre riddles developed to inspire a breakthrough into an awakened state of mind - have been translated into English for many decades now. Perhaps the most famous is the 13th Century Chinese classic Mumonkan, or 'Gateless Gate,' which includes the well-known koan 'Mu.' This collection, however, is reconstructed from various fragments originally making up a purely Japanese work dating from the 16th Century, called Shona-katto-roku, or the 'Warrior Koans.' With it, the translator Trevor Leggett has supplied the English-speaking world with an invaluable treasury of rare Zen wisdom.

There are two main parts to the book, the introductory material, and the koans themselves which are accompanied by the comments of Zen masters. The book starts with an introduction by Leggett, which explains the origins of the koans, their relationship to the samurai that they were developed for, and their uniqueness among Zen documents. This is followed by two more introductions by Imai Fukuzan, the Japanese scholar that reassembled these koans from various incomplete sources in 1925. In these accounts, we are given the history of 'samurai zen,' and its relationship to both Chinese & Japanese forms of the religion. The importance of the koan in Zen development is also explored, used asa device to lead to a breakthrough from the usual fear of death, which explains its popularity with the samurai. The city of Kamakura was a centre of Samurai Zen, and Leggett writes the following:

"The warrior pupils of the early period of Kamakura Zen had no bent for scholarship and could not be taught by means of the classical koans from the Chinese records of the patriarchs. The Zen teachers of the time trained them by making up koans on the spot, in what came to be called skin Zen or on-the-instant Zen."(Samurai Zen, p.21)

In his two introductions, Imai Fukuzan goes into more detail about the history of the samurai koans and those that invented and used them. This gives a real sense of the lineage of the masters and samurai that were involved with them, and reveals how an originally Chinese technique was adapted to the peculiarities of the Japanese warrior class. Through Fukuzan's writing, the reader becomes aware of how close these unique koans came to becoming lost forever, and how fortunate modern Zennists and scholars are that they were saved in the nick of time. Indeed, by the early modern period, many masters from the Rinzai sect of Zen which had formally used these koans, thought that samurai Zen had consisted of reciting the name of Amida Buddha. The heart of this book are the 100 koans themselves and the commentaries on them by Zen masters, however, and the true flavour and value will be best served with an example or two of these:


At the beginning of the Kencho era (1249), ‘Old Buddha’ Daikaku was invited from Kyoto by the shogun Tokiyori to spread Zen in the East of Japan. Some priests and laymen of other sects were not at all pleased at this, and out of jealousy spread it around that the teacher was a spy sent to Japan by the Mongols; gradually more and more people began to believe it. At the time the Mongols were in fact sending emissaries to Japan, and the shogun’s government, misled by the campaign of rumours, transferred the teacher to Koshu. He was not the least disturbed, but gladly followed the karma which led him away.

Some officials there who were firm believers in repetition of the formula of the Lotus, or in recitation of the name of Amida, one day came to him and said: ‘The Heart Sutra which is read in the Zen tradition is long and difficult to read, whereas Nichiren teaches the formula of the Lotus which has only seven syllables, and Ippen teaches repetition of the name of Amida, which is only six. The Zen Sutra is much longer, and it is difficult to get through it.’


The teacher listened to all this and said: ‘What would a follower of Zen want with a long text? If you want to recite the Zen sutra, do it with one word. It is the six- and seven- word ones which are too long.’


Master Setsuo used to present his pupils with this story as the riddle of Daikaku’s One-word Sutra. He would say to them: ‘The golden-faced teacher (Buddha), it is said, in all his forty- nine years of preaching never uttered a single word. But our Old Buddha (Daikaku) declares one word to lead the people to salvation. What is that word, say! What is that one word? If you cannot find it your whole life will be spent entangled in creepers in a dark cave. If you can say it, with that leap of realization you will pervade heaven and earth.’
(Imai’s note: Those who were set this riddle over the years tried the word ‘heart’, and the word ‘Buddha’, or ‘dharma’, ‘God’, ‘mantra’, but none of them hit it. When the pearly sweat runs down the body, coming and going for the interviews with the teacher, the one word will be met directly.)


This became a koan in Kamakura Zen at the interviews of Setsuo, the 151st master at Kenchoji.

In 1299 when Fukada Sadatomo came to Kenchoji for a ceremony, he met the teacher in a room where there happened to be a picture of the contemporary Sung dynasty beauty Rei Shojo. He asked Master Saikan, ‘Who is that?’
The teacher replied, ‘It is said it happens to be Rei Sho ̄jo.’
Sadatomo looked at the picture admiringly and remarked, ‘That picture is powerfully painted and yet of the utmost delicacy. Is that woman now in the Sung country (China)?’
The teacher said, ‘What do you mean, in the Sung? Now, here, in Japan.’
The noble said, ‘And where is that?’
The master said loudly, ‘Lord Sadatomo!’
The noble looked up.
‘And where is that?’ said the teacher.
Sadatomo grasped the point and bowed.

TEST
What did Lord Sadatomo grasp?


This became a koan at Kenchoji from the time of Doan, the 105th master there."

Samurai Zen by Trevor Leggett is a wonderful insight into a bygone age of Buddhism in Japan. It allows its reader to gain valuable insights into the development of Zen in that country, and how the unlikely figures of samurai warriors benefitted from the wisdom of wise Zen masters. Moreover, in the 100 koans that it contains, can be found 100 Dharma-gates to enlightenment, each waiting for the correct 'key' to be opened. And in such an opening is found the openness of Zen; a unity of experience that brings together the Buddha, the master, the reader, and a long-dead samurai, all smiling in the void.

i do not get the sadatomo koan can you help me explain more about it?

Well, Lord Sadatomo thought in terms of time & space, & placed the woman in the painting in Sung China, but in fact, she has always been nowhere but here, right now. Can you see her? She is smiling most sweetly!