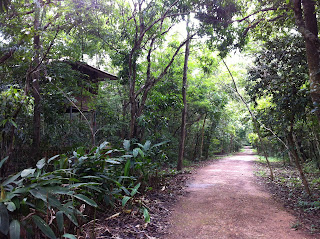 A forest path in the International Forest Monastery.

Forest walking can be a wondrous exercise. Traversing the damp track through the fresh-aired woods is stepping through the mind. Though feet tread over wet soil, leaves and twigs, where does all this take place? In this very mind. The two are, in fact, one and the same. For, in actual experience, there is no separation between the sights & sounds of the forest and the mind that apprehends them; they arise together. 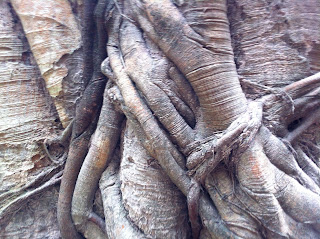 The intertwining trunk of the mind...

Science, it would seem, affirms this unitive experience. For, where do we experience the five senses but in the sixth one, the mind? Take vision, for example. When I look at the tree, it is light reflected off of its surface that travels to my eye, and from there to the brain. And it is here, in the mind that's associated with this brain that I experience the tree; not 'out there' in the world, but here in the mind. In fact, if reflected on, everything that's perceived is known in the mind, not where they actually exist (assuming that they do independently exist from the mind - not that's another topic altogether!) 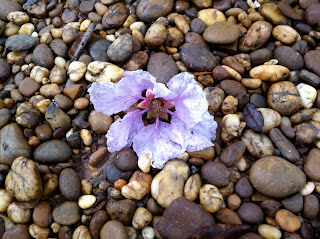 A fallen flower on the forest path.

In Buddhism, experience is divided into the five aggregates (pancakkhandha in the Pali language). These aggregates, or 'lumps' of experience combine to form the universe, or an individual's particular view of the universe, that is. The five are: form (rupa), sensation (vedana), perception (sanna), mental formations (sankhara), and consciousness (vinnana). The latter four are mental in nature, whilst the first is the physical world, or a person's experience of the physical world. Consciousness is special in that it is said to be always present along with one of the other four aggregates. So, if I think of ice cream, there is the 'mental formation' of an ice cream in the mind, and along with that consciousness, or awareness, of the mental image. If no consciousness were present, then I would not be conscious of the mental image, and therefore no ice cream. It is the same with the first aggregate of form. To see a tree, consciousness must be present; otherwise no tree. 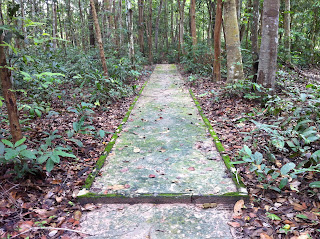 So, the trees occur in consciousness, in other words, in the mind. Colours are perceived by the visual centre of the brain, not over there where the trees really are (above objection accepting, of course.) The sounds of the forest such as birds, insects, and the sound of the wind amongst the trees, also occur in consciousness. Ditto smells, tastes, and tactile experiences. The leaf that I gaze upon is really a mental leaf, not a physical one. It is a mind-leaf. It is an image formed on the retina of the eye, and then perceived in the visual centre of the brain. It is part of the mind, made of mind, preceded by mind. 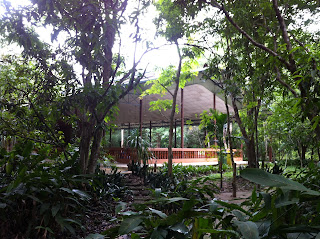 A pavilion (Thai: sala) deep in the forest.

This unity of mind and the physical world has an interesting and inspiring aspect to it. They reflect one another. The mind is partly shaped by past and present experiences of the world, whilst the world (as I experience it) is conditioned by the mind. This is why two people's experience of the same event is rarely identical; the world is experienced by two minds, and partly conditioned by them, so the same world appears different. This may be interesting, you might remark, but why inspiring? Well, it means that not only is this mind unique, but so is the world that it perceives. Moreover, this unique world is unique because of this very mind. What a powerful thing the mind is! Sure, the world has innumerable effects on the mind, but it is the same the other way around, too. 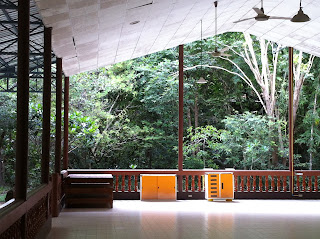 The wonderful view from the pavilion.

One person may look at the forest and see something quite ugly and dirty, perhaps threatening. Another person may see the same forest with indifference, neither positive nor negative. When I look, I see something wonderful, full of wisdom. Uncomfortable, yes. Potentially dangerous, also. But these negative traits are part of that very wisdom. The human mind is a tremendous thing; truly awesome. At the same time it is an awful place, full of fears, hatreds, and ignorance. Sometimes it is merely disinterested; a cold lack of care. Forest walking reflects this threefold nature of the mind. Each fluttering of leaves, buzzing of an insect, and chirping of a bird is the sound of the mind. The birdsong appears beautiful, for that is the way this mind perceives it to be, whereas the insect's buzzing is colored with a mild dislike at the instinct that it may precede being bitten. As to a myriad objects that don't demand attention, such as fluttering leaves, well they are perceived with indifference. 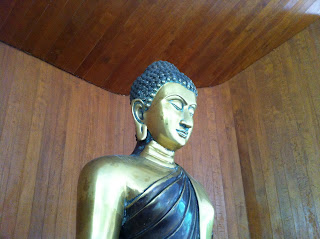 The Buddha statue that stands in the pavilion.

Forest walking is a wondrous thing. Here, in the woods of the International Forest Monastery in Northeast Thailand, it seems particularly so. This is surely due to the influence of the forest monks and their teachings on seeing the Buddha's teachings in the forest. But wherever a forest is, it is of the same nature as the one here. It also reflects the mind that perceives it; and vice versa. Dead insects in a pool of water speak of impermanence, an important doctrine in Buddhism. But they also reflect some part of the mind that sees them. Every step along the forest track reveals the Buddha's wisdom, which s the natural way of things. Each tread is also a step through the mind. All that is needed to see this, and learn from it, is an open mind...

But wherever a forest is, it is of the same nature as the one here. It also reflects the mind that perceives it; and vice versa. Dead insects in a pool of water speak of impermanence, an important doctrine in Buddhism. But they also reflect some part of the mind that sees them. Every step along the forest track reveals the Buddha's wisdom, which s the natural way of things. Each tread is also a step through the mind. All that is needed to see this, and learn from it, is an open mind...


does this mean remove the "I" in conditional mind and instead learn things in an open mind w/o reactions, simply just as things really are both spacious nature?

Good question, Anonymous - and only you can answer it! One suggestion, however: When looking at a forest (or whatever), what is it that perceives, on present evidence? In other words, what do you see where others see your face? Here, I see the forest, this keyboard, or a myriad other things. The thing I don't find here is 'me!'

G, you mean that not what see in this world can be deemed real only conditionary? so dont rely too much on outside but inside, i mean the space within? since i understood the blog tells about that different people have their own interpretations of experience.

Looking at the world, the body, & the mind, it's true that people have their different experiences. But, when we observe the spaciousness in which the world, the body, & the mind arise, is our experience different? Can emptiness be different for you, me & other people? Can there be two or more emptinesses? Or is it the same emptiness for us all? Looking home and seeing this emptiness, and then living from it, we might find out the answers. And so, we reach the end of words...