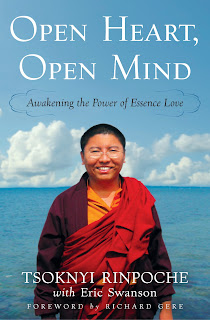 Tsoknyi Rinpoche has - along with co-author Eric Swanson - written a wonderful book. The Rinpoche's warmth & wisdom exude every page, flowing with what he terms 'essence love.' (The full title of the book is Open Heart, Open Mind: Awakening the Power of Essence Love.) Swanson's role in the book is not exactly described, even in his own note that appears at the beginning of the book, but from his remarks there it seems whilst he didn't translate the work into English, some limited translating was undertaken. Perhaps he helped top gave the book its cohesive narrative - if so, he did a wonderful job! Whatever the case, the book is presented as the thoughts, experiences and teachings of Tsoknyi Rinpoche, and so from herein this review will refer to him alone as its author.

Tsoknyi has a delightful openness in describing his own life, but always in relation to Buddhist teachings. So, for example, he writes extensively about his being declared a tulku (reincarnation of a Tibetan Buddhist master) as a child, but in doing so he also relates important ideas from the Tibetan tradition, as well as revealing his own very human responses to such a discovery. Born in 1966 in Nepal, Tsoknyi is the son of another Buddhist master called Tulku Urgyen Rinpoche, who was a renowned teacher of dzogchen ('great perfection'), a subject that the author explains in the book. The author is the third incarnation of Tsoknyi Rinpoche, and is a tulku in both the Nyingma and Drukpa Kagyu traditions within Tibetan Buddhism, and holds official lineage in the Kagyu school. When he relates al this in the book, however, it is never with any sense of pomposity or self-importance, but with a down-to-earth candor.

This apparent propensity to an open and honest sharing of his own life experiences to illustrate Buddhist ideas is a really engaging aspect to the book. So, for example, early on in its pages, in the chapter entitled 'The Bridge,' he relates the story of when he was too scared to cross a thick glass bridge between two skyscrapers. It was only at the third attempt that he managed to traverse its transparent length, having contemplated the other people passing over it, and then reflecting upon himself. Elsewhere, he writes lovingly of his marriage and two daughters, and how feelings of love and compassion were awoken in him when cradling the latter. Here's an extract from the book that illustrates his warm and personal style:

"I had never been on a train before. I'd heard about trains from my grandfather, who'd traveled on one several years earlier. He described it as something like a line of houses, each about the size of ours in Nubri, which traveled on wheels along metal rails.
The image worried me. How could a house move on wheels without cracking and breaking? I approached the possibility of traveling in a house on wheels with some trepidation, influenced by imagination.
When I saw the train with my own eyes, I realized it was made of metal, not wood and stone, and my notion of traveling in a moving house was put to rest by actual experience.
it was then that I began to discern the difference between imagination and reality - the beginning of a long process that has led me to understand the ideas about who we are and what we're capable of achieving are based on misconceptions, on stories we're told by others, enhanced by the fertility of imagination that is one of the gifts of openness and clarity."
(Open Heart, Open Mind p.83)

So, having established the style of Tsonyi Rinpoche's writing, let's take a closer look at the teachings themselves. The subtitle of the book refers to 'essence love,' but what exactly is it? Deriving from the Tibetan term nying-je, which Tsoknyi describes as "an unconditional kindness, gentleness, and affection born of openness and intelligence" (Ibid. p.61). He goes on to say that essence love is a basic sense of well-being for oneself and others, and that it comes out of the realization of emptiness and clarity. These qualities are related to dzogchen, referred to above in reference to Tsoknyi's father. The author also puts much emphasis on 'the great perfection,' and there is a beautiful sequence in which he describes teachings on it from his father, who related dzogchen to the spaciousness of the sky in relation to the clouds that float through it:

"Yes, look how they're changing. But the space beyond them hasn't changed at all. That space is like your essential nature. It doesn't change. It doesn't have a beginning or an end. Just as clouds pass through the sky, sometimes covering it completely, space is always there, in our hearts, in our minds, in all of our experience."
(Ibid. p.187)
Inspiring stuff indeed, but as Tsoknyi notes in his narrative, such statements can appear coldly abstract if not realized in actual experience. Following on from his father's wise counsel above, the author relates how he went outside on a cliff edge and actually watched the sky with its ever-moving, ever-changing contents. He then noticed how the contents of his mind, his thoughts and emotions were essentially the same as those clouds, which resulted in a clarity and freedom from the negative feelings that he had been experiencing up to that point. Merely describing his own experiences, however inspiring they may be, will necessarily help his reader to share in these realizations; thankfully, Tsoknyi includes practical instructions in the book, as well, such as this mindfulness practice he calls 'scanning':

"Assuming a stable and comfortable posture is a good start in terms of aligning the mind and the body. The actual practice involves a few different methods, the first of which is an easy exercise in what may be called 'scanning,' a very simple handshake between the mind and the body.
Lightly draw your attention to your body from the top of the head to the tip of the toes. Don't focus too intently on any part. Just bring a bare attention to each area.
Sometimes, of course, a physical sensation of discomfort will arise; that's normal. But it's not necessary during this exercise to dwell on such sensations or go looking for the causes. Instead, just note the experience and move on to the next part of the body - shaking hands so to speak, with every part: 'This is my forehead. How do you do, forehead?' 'This is my nose. How do you do, nose?'
For the practice known as mindfulness to have any effect, we need to learn to be polite toward the experiences we discover in the scanning process. Maybe someday politeness will be the word used instead of mindfulness. But before that can occur, we need to reach across the islands of discontent within ourselves and shake hands between our experiences and the stories that surround our experiences."
(Ibid. pp.126-127)

Hopefully, this review has given the reader a taste of the warmth & wisdom of Tsoknyi Rinpoche, as found in Open Heart, Open Mind. The teachings and practices that he presents in this wonderful book are potentially both life-enhancing & transformative - even enlightening. Allied with the easy and entertaining manner in which he communicates his teachings, this encouragement to awaken to our spaciousness and the essence love that flows from it form a powerful message indeed. Open Heart, Open Mind is a work worthy of our careful attention, and in the spirit of openness that it promotes, it is a book that can benefit anyone that reads, whether Buddhist or not. A fine work.