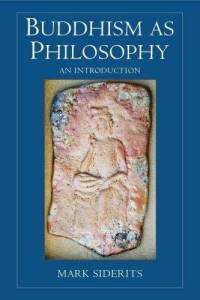 Buddhism as Philosophy: An Introduction is an interesting book. Its author, Mark Siderits, is Professor of Philosophy at Seoul National University, and he has brought his professional philosophical skills to good use in this work. Taking the three main philosophical areas of philosophy, ethics, metaphysics and epistemology as his framework, he describes the major developments in Buddhist thought, covering those found in early Buddhism and subsequent schools of Mahayana Buddhism. The book is chock-a-block with quotations from source texts such as the Pali Canon and the works of Nagarjuna and Vasubandhu (two extremely important Mahayana Buddhist philosophers). And Siderits weaves his narrative around these texts with keen insight and admirable organization.

The book begins by explaining the basic teachings ascribed to the Buddha and found in the Pali Canon, or Tipitika ('Threefold Collection').  Siderits elucidates the four noble truths of suffering, the cause of suffering, the ending of suffering, and the path leading to the ending of suffering clearly enough. Though somewhat dry, as one might expect a philosophical account to be, this section of the book is not too difficult to follow, unlike some of the later chapters that focus on Mahayana Buddhist ideas. An interesting sidetone here is that when describing the origin of suffering, Siderits focuses on ignorance rather than desire. Whilst the former is an important factor in arising of suffering, usually it is the latter that is the traditional focal point when exploring this central idea of Buddhism. Perhaps it is because he is a philosopher that Siterits puts the emphasis of ignorance, but this is an issue worth reflecting on, nevertheless. This philosophical approach to the issues is systematically applied by the author, and he uses logic to examine Buddhist ideas that normally are less rigorously explored in most works on the subject. This is illustrated on the following extract where Siderits is investigating the relationship between suffering and the Buddhist teaching of not-self. The Sanskrit word skandhas refers to the five aggregates that the Buddha said comprised the person. The letter C stands for Conclusion.

Whatever the validity of the above assertion, it serves as an example of much of the author's approach to the philosophical questions that come out of a rational contemplation of Buddhist teachings. Of course, to many a Buddhist practitioner this whole endeavor may smack of intellectual folly, for they will feel that it is in the walking of the Buddhist path that it is to be evaluated rather than in arguments formulated for and against its central doctrines. However, even for such Buddhists there is still much to be gained from a disciplined analysis of the teachings, which Siderits attempts to do throughout this work. He makes this point early in the book:

"Doing philosophy is said to help us acquire the conceptual tools we need to make sense of what we encounter in meditation. So, for instance, mastery of the philosophical arguments for the non-existence of a self will make it easier to appreciate the significance of the complex causal connections we find when we closely observe our mental processes. That there are these causal connections will then be seen to confirm that there is no self standing behind the the scenes directing our mental lives."
(Ibid. p.25)

Talking of non-self, Siderits discusses this essential Buddhist teaching throughout the book, as one would expect. In the chapter entitled Non-Self: Empty Persons, he utilizes to great effect both Pali texts and the non-canonical work 'The Questions of King Milinda' to demonstrate the idea of non-self to the reader. From the latter work, Siderits uses the dialogue between King Milinda and the Buddhist monk Nagasena to elucidate the concept of non-self in a clear manner that both experienced Buddhists and those new to this idea can appreciate. A famous section from this dialogue is the analogy of a chariot for that of a person, and the author explains the parallels between them with clarity. That he does this without merely promoting the argument of Nagasena is to his professional merit as a philosopher, and it also gives the reader the opportunity to do so, as well, which most Buddhist books do not do, for obvious reasons.

Not all of Buddhism as Philosophy is not as easy to follow as the aforementioned sections, however. Much cerebral effort is required in subsequent chapters to master the arguments employed with regards to the Buddhist luminaries Vasubandhu and Nagarjuna, along with the related Mahayana philosophies of Yogacara and Madhyamaka. The ideas of Vasubhandu are utilized in the chapters Abhidharma: The Metaphysics of Empty Persons and Yogacara: Impressions-Only and the Denial of Physical Objects. As the titles suggest, there are some pretty philosophically dense passages to be found in these parts of the book, as can be seen in the following extract:

"[Objection:] Why does that which has been most forcefully cultivated not perpetually bear fruit?
[Reply:] Because the mark of the conditioned is that what persists becomes otherwise. And the being otherwise of that conforms to the fruition of other cultivations. But this is merely an indication concerning the forms of all cognitions. For the buddhas [fully enlightened beings], though, there is abundance in the cognition of immediate causes, as is said:
The cause, in all its aspects, of a single eye of a peacock's feather
Is not knowable by one who is not omniscient, for the cognition of that is the power of omniscience."
(Ibid. p.127)

One use of this book other than to unravel dialogues like the one above is as a history of Buddhism. This is because much of Buddhism's history is tied up in its doctrines, the teachings of liberation that have been used for well over two thousand years to help people loosen the bonds of desire and ignorance. To understand these teachings is understand how Buddhism has changed through time, developed and adapted to different times and places whilst retaining its essential purpose of being a path that leads to the ending of suffering. Siderits' work helps the reader to glimpse important philosophical innovations in this process, which includes the Yogacara and Madhyamaka forms of Buddhism, the origins of which he succinctly describes below.

"Yogacara is one of the two chief schools of Mahayana Buddhism. It is not, however, the earlier of the two. The ideas that became the basis of Madhyamaka, the other major school, began appearing in sutras perhaps as early as late in the first century BCE. And these ideas received their first philosophical formulation, in the work of Madhyamaka's founder Nagarjuna, in about the mid-second century CE. By contrast, the sutras that first express distinctively Yogacara ideas seem to have appeared no earlier than the second century CE. And the founders of the school, Asanga and Vasubandhu, are generally dated around the middle of the fourth century CE."
(Ibid. p.146)

Whilst the above extract may appear to be more history lesson than philosophy, it is an important example of the background information that Siderits supplies throughout the book, and which give the reader important insights into the contexts of Buddhist philosophy. Both Yogacara and Madhyamaka are given plenty of page space in Buddhism as Philosophy, allowing the author to broaden the scope of his philosophical explorations. Indeed, much of the last quarter of the work is devoted to these two important philosophies, upon which so much of subsequent Mahayana Buddhism is built upon. The final chatter centers on the school of Dinnaga as a way to examine buddhist epistemology.

Buddhism as Philosophy is not an easy book; but it is worth the effort required to fully appreciate it. It isn't for people with a passing interest in Buddhism (unless they happen to be highly-philosophical types.) It is, however, a valuable addition to any serious Buddhist's bookshelf, where it can enable them to deepen their understanding of important Buddhist doctrines. Alongside this, Buddhism as Philosophy is a work that will give philosophers not familiar with Buddhism a chance to explore its rich and intricate teachings in a systematic & vigorous manner that they would be accustomed to. Would reading this book enlighten you? Probably not, but it can certainly give its readership the information with which they could awaken themselves. It is, therefore, a work that this reviewer has no qualms in recommending.

this book's title alone brings up an important point. depending on how it is looked at or indeed how it is practiced, buddhism can validly be considered a religion or a philosophy (or for that matter a non-religion and/or non-philosophy). there is a contention of many westerners, who have acquired a reactionary stance toward the religion they grew up with, that buddhism is not a religion but a philosophy, taking buddhism's non-theistic status and emphasis of method over ritual and wisdom over "faith" as arguments for this claim. however, enthnologists and anyone with experience with buddhist cultures will be quick to point out that buddhism is by all means practiced popularly as a religion, with the buddha being worshipped and raised to god-like status and buddhist practice being about performing daily rituals as a habit with lots of faith and devotion. in fact, such is the case for the majority of people in buddhist cultures. the cultural component of buddhism need not necessarily be representative of its most serious teachings. so understanding that buddhism, being all these things ranging from tradition and cultus all the way through to the buddha-dharma, allows the reader to appreciate this book's title in the first place and not criticise it as redundant, exclaiming "buddhism AS philosophy? but buddhism IS a philosophy."

just a couple of corrections. :)

-sidirits' focus on ignorance as opposed to desire as the origin of suffering doesn't really have anything to do with his being a philosopher. it is not HIS focus. desire appears as the focal point in the teachings about suffering primarily in the therevada tradition. in most other traditions, ignorance (avijja) takes center stage as the origin of "suffering" (dukkha). the primary citation for this is the description of ignorance as the first of twelve links (nidanas) in the teaching of pratityasamutpada (dependent origination).

-any buddhist practitioner who might find siderits' analytical approach distasteful and consider it "intellectual folly" would be doing an injustice to the history and practice of the very path they are walking by taking the buddha-dharma as some sort of anti-intellectualism. the buddha-dharma as we know it today has been shaped by buddhist masters meeting in red-blooded rock-em-sock-em philosophical and logical debate, sometimes with entire monasteries of the loser having to take on (convert to) the philosophical position of the victor. the rational and the logical play a very important (some say indispensible) part even on the path that ultimately leads beyond those very things. as an example, even today buddhist monks in tibetan monasteries meet five times every day in a debating yard to test their philosophical knowledge in a kind of merciless logical debate so rigorous that it would make most western philosophers and debating champions tremble in their metaphysical bootstraps. (so vulcans aren't science fiction after all -- just the part about them having no emotions and pointy ears ;-) ) they consider this together with the work on the meditation cushion and the work out in the world the necessary and sufficient causes for enlightenment. even zen koans, popularly understood as a means of overcoming logic and rational thought, actually have a great deal of logic in them, just not the kind most are used to.

Good & interesting points, Anonymous. Thank you for taking the time to write them.

thank YOU for reading the book digesting its contents and giving potential readers the necessary infos to decide if this book is for them.
p.s. in case it wasn't clear, the comparison with vulcans is definitely meant to be read positively.