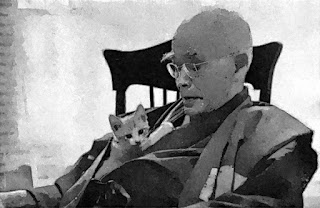 “Satori is not a morbid state of mind, a fit subject for the study of abnormal psychology. If anything, it is a perfectly normal state of mind. When I speak of a mental upheaval, some may be led to consider Zen as something to be shunned by ordinary people. This is a most mistaken view of Zen, but one unfortunately often held by prejudiced critics. As Joshu declared, "Zen is your everyday thought"; it all depends on the adjustment of the hinge whether the door opens in or opens out. Even in the twinkling of an eye the whole affair is changed and you have Zen, and you are as perfect and as normal as ever. More than that, you have acquired in the meantime something altogether new. All your mental activities will now be working to a different key, which will be more satisfying, more peaceful, and fuller of joy than anything you ever experienced before The tone of life will be altered. There is something rejuvenating in the possession of Zen. The spring flowers look prettier, and the mountain stream nuns cooler and more transparent. The subjective revolution that brings about this state of things cannot be called abnormal. When life becomes more enjoyable and its expanse broadens to include the universe itself, there must be something in satori that is quite precious and well worth one's striving after.”

Nice post! Kushinagar is a very ancient and historical place in Uttar Pradesh of India. It is famous place named of Lord Buddha. There are very beautiful Buddhist Temple So, attracts for tourism. You can find more - Best restaurants in Kushi Nagar | Temple in Kushinagar | places in Kushinagar

All the things in this blog is so amazing and nicely written . Thanks for sharing your experience and photos with us.Keep posting like this.

All the things in this blog is so amazing and nicely written . Thanks for sharing your experience and photos with us.Keep posting like this.
Top places in Kushinagar | tour and travels in kushinagar | Buddha Mahaparinirvana | Kushinagar

One of the best blog on Buddhism. I like to read about Buddha blog. Here i would like to share one more blog which is related to Buddha life story

WoW! I Nice Article it's useful. India is the country’ which famous for different kind of tour each the cities in India have historically back ground. But Delhi/Agra/ Jaipur is the most popular destination of North India. Golden Triangle Tour 3 Days is good for people those are interested to visit these 3 city in short time.
People can enjoy to visit all these site of India.
Visit - Humayun tomb at Delhi.
Taj Mahal tour at Agra.
Amber Fort at Jaipur.
Golden Triangle Tour 4 Days
Rajasthan Tours Packages India
Golden Triangle Tour 5 Days
6 Days Golden Triangle Tour

Are you tired of seeking loans and Mortgages,have you been turned down constantly By your banks and other financial institutions,We offer any form of loan to individuals and corporate bodies at low interest rate.If you are interested in taking a loan,feel free to contact us today,we promise to offer you the best services ever.Just give us a try,because a trial will convince you.What are your Financial needs?Do you need a business loan?Do you need a personal loan?Do you want to buy a car?Do you want to refinance?Do you need a mortgage loan?Do you need a huge capital to start off your business proposal or expansion? Have you lost hope and you think there is no way out, and your financial burdens still persists? Contact us (gaincreditloan1@gmail.com)

Thanks for Sharing Infor


I would like to thanks you for this amazing post. You gives wonderful tips and very important points.
Golden Triangle Tour 4 Days

Your post is very thoughtful, in this post you discovered the beauty of India. Thanks For sharing this beautiful post…
I am Sunil owner of Taj Day Package we provides the best travel sights of India in your budget. If you want to book your tour now, so click the link given below.
Same Day Agra Tour
Same Day Agra Tour by Train
Overnight Agra Tour
Private Taj Mahal Tour
Sunrise Taj Mahal Tour
Same Day Delhi Tour

If you need any sad Breakup dp for Whatsapp we are sharing with you the best wallpaper photos.

Welcome to Pacific Tour India
I Read your blog, it`s so informative:
Golden Triangle Tour of India which include Delhi, agra, Jaipur. Golden Triangle means which connects the capital city Delhi with Taj Mahal city {Agra} which is original love later with white marble and pink City {Jaipur} which is capital of Rajputana familys these three city are situated in Triangle Shape. The land distance b/w and driving hours are almost same, you can also visit most viewable historical monuments of INDIA which is situated in these 3 cities...
More Packages:-
Golden Triangle Tour 5 Days

Awesome thanks for sharing this blog.

The post looks so genuine, keep posting more and all the best for future posts.
Fathers Day Images in Hindi


The beautiful article will keep visiting this site for more blogs. thank you

This post is very helpful. It’s informative too!
Hindi News

What a fantastic post you shared. Thank you so much for sharing this post myself anubhav from Agra, India. We have a tour operator company by the name of Padma Holidays. Our company provides best tour packages / services to our valuable Guests

Thanks For Sharing this premium knowledge free of cost..
Free Job Posting