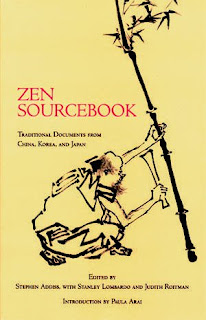 If you want a general introduction to Zen literature, or you're a seasoned Zennist, this book's for you. It's an incredible collection of Chinese, Korean and Japanese texts from many of the most important masters and teachers of Zen, from Bodhidharma, the founder of the sect in China, to Kyong Ho, a more recent exponent of this intriguing school of Buddhism. The three authors, Stephen Addiss, Stanley Lombardo, and Judith Roitman deserve immense gratitude from the English-speaking Buddhist world for this unique compilation. Not only have they chosen such central texts from the history of Zen, but they have also translated many of the texts themselves, with both Buddhist sensitivies and literary finesse. Some of the works contained are not translated by the authors, with extracts from John Blofeld's rightly applauded rendition of Huang Po's sermons a fine example.

So, with such a wide-ranging and varied selection of writings, where to begin? Well, the beginning is as good a place as any to start, and that's where we'll look first. The Introduction is written by Paula Arai, Associate Professor of Religion at Louisiana State University. She gives a lucid account of both the history of Zen Buddhism, as well as an account of its practices, such as the koan, a device that features extensively in the book, not least in the wonderful (and complete) translation of Wu-men's Gateless Barrier, rendered into English by Stephen Addiss. Let's take quick peek at Addiss's efforts:

"Wu-tsu said, 'Suppose a water buffalo passes by a window. The head, horns, and four legs go past - why can't the tail pass by?'
Wu-men's Verse
If it passes by, it falls in a ditch;
If it goes back, it is destroyed;
But this little tail,
How wondrous it is!"
(Zen Sourcebook, p.107)

The translation here is clear and to the point, even if the koan itself may be somewhat more confusing! This is a feature of the translations featured in the book; easy to comprehend (at least intellectually!), and yet at the same time, not without an awareness of the importance of the value of the writings as pieces of literature. Other translators whose work appears here include J. C. Cleary (Tai-hui, Swampland Flowers & T'aego, Collected Sayings), Anne Dutton (The Awakening of Mugai Nyodai), James Green (Chao-chou, Recorded Sayings), and Norman Waddell (Bankei, The Ryumon-ji Sermons). Now, even if, like the present reviewer, you already posses some of these translations, the collection as a whole has so many different works included that there's bound to be much that's new to you. One example of this for the reviewer is 'The Biography of Miao-tsung' by Miriam Levering:

The sheer scope of the book is something that should be noted here also. It starts with two important texts chanted in Zen monasteries the world over: the Heart Sutra & the Kanzeon (Guan Yin) Sutra, translated by Addiss & Lombardo. Next, comes the early Zen figures Bodhidharma, Seng-ts'an, and Hui-neng (Sixth to Eighth Centuries AD). Other Zen greats not already mentioned include Lin-chi, the P'ang family, Dogen, Ikkyu, So Sahn, and Hakuin. Another important personage featured is the Korean monk Chinul (1158 - 1210), translated by Lombardo:

"Where everything is empty, luminous awareness is not obscured, and this empty, calm, luminous mind is your original face. It is also the Dharma-seal transmitted in direct succession by all the Buddhas, Patriarchs, and enlightened beings of the past, present, and future. If you awaken to this mind, there are no steps in between, no stairs to climb. You go directly to the stage of Buddha, and with each step you transcend the three worlds.You will return home, all doubts resolved. Filled with compassion and Wisdom, you will be the teacher of Heaven and Earth. It will be as if gods and humans offered you thousands of gold coins every day, with the promise of more. You will indeed have finished the great work of life and death."
(Ibid. p.139)

Such priceless teachings are abound in this book, and personally having little knowledge of Korean Zen, the works from Korea such as the one above are of particular interest. The clarity of both Chinul's Zen and Lombardo's translation are dazzling. The description of the "empty, calm, luminous mind" is enough to spark a direct experience of the original face. 'Zen Sourcebook' is chockablock full of writings designed by expert Zen masters to inspire our awakening. We are privileged to have access to them, and the way that Addiss, Lombardo & Roitman have worked to assemble them together for our enjoyment and enlightenment is worthy of much praise. I wholeheartedly recommend this wonderful book, for in its 275 pages are such words as split heaven asunder and leave the light of the Buddha shining in our minds.

The above book is published by Hackett Publishing Company, and is available from their website at: Zen Sourcebook
Posted by G at 12:00 AM