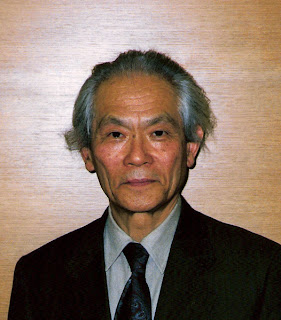 "According to Meister Eckhart, God gives birth to his Son in the solitary soul. 'The Father begets me as his Son, as his very same Son. Whatever God works is one. Thus he begets me as his Son without any distinction.' The 'birth of God in the soul,' spoken of here in the language of the Christian doctrine of the Trinity, is the leap to realization of his own authentic life that man experiences in 'solitariness' with the surrender of the ego."
(The Buddha Eye: An Anthology of the Kyoto School, edited by Frederick Frank., p.157)
The above quotation, along with the others in this article, are taken from the essay '"Nothingness" in Meister Eckhart and Zen Buddhism' by Ueda Shizuteru, a member of the Kyoto School of Buddhist philosophy and professor emeritus of the Department of Religion in Kyoto University. As with other Buddhist scholars, including the famous D. T. Suzuki, Ueda had a intense interest in the writings of Meister Eckhart, the Medieval Dominican priest. Not surprising, really, when we examine some of the parallels between Eckhart and the teachings of the Buddha. Take the above quote, for example. Ueda extracts the essential similarity between Buddhism and Eckhartian theology; both involve the giving up of the sense of being a separate self or ego, which dies into the greater reality which the Buddha named Nirvana and Eckhart called God. It is worth noting that in the above words Eckhart apparently equates the awakened 'soul' (or 'mind') with that of Christ, when he emphasizes that the Son begat in him is "his very same Son."


"'The Father begets me as his Son without any distinction.' This means that the absolute event of salvation touches each and every individual in its full originality, without first passing through a mediator. This being the case, Eckhart stands very close to Mahayana Buddhism, the philosophical-religious base of Zen Buddhism. According to Mahayana teaching, the very same awakening to the very same truth transforms each and every individual into the very same Buddha - that is, it makes each individual the same 'Awakened One' that it made of the historical Buddha, Gautama."
(Ibid. pp.157-158)
Ueda's excellent insight that Eckhart's view (or experience) of the Son is "without any distinction" parallels the Mahayana Buddhist belief that every 'Awakened One' is the Buddha is well worth reflecting upon. For, whereas in conventional Christian thought, Jesus is God's only begotten Son, and we are separate from Christ and God, even at the deepest level of being, Eckhart insists that if we practice correctly, we can merge into God, and are his Son just as Jesus was/is. The implications of this conclusion are most dramatic when we consider how it would affect one's relationship with the local cleric or preacher, unless a dignified silence was maintained. Imagine declaring to a Christian congregation, "I am the Son - and so are you!" This identification with being God's Son is mirrored in the Zen experience of being Buddha, that is to say, discovering that the essence of being is Buddha. (It's certainly not the case that one's ego is the Son or the Buddha, but that which lies beyond the sense of being an individual entity.

In essence, this realization that we are all Buddha is the case with Theravada Buddhism also, as the Buddha is considered the first Arahant (in this age), and that everyone that achieves full awakening is also an arahant. ('Arahant' is a term that denotes an enlightened person in the Theravada tradition, and is the ideal in that form of Buddhism. It is superseded by the notion of the Bodhisattva in Mahayana Buddhism, but that's a discussion for another time…maybe!) In Theravada Buddhism, the title 'Buddha' is reserved for the historical Shakyamuni Buddha, Siddhartha Gautama, and his predecessors that all discovered the Buddhist truths independently and then established Buddhism in eras when it had disappeared. Despite these sectarian differences in semantics, in the light of the central truth of enlightenment or salvation as understood by the Buddha and Eckhart, we can say that Arahant, Buddha, and Son are all descriptions of those who have been 'saved' from life's sufferings.


"So far the similarity is only of a general nature. A more deep-reaching spiritual kinship appears when Eckhart speaks of a 'breakthrough to the nothingness of the godhead.' 'The soul is not content with being a Son of God.' 'The soul wants to penetrate to the simple ground of God, to the silent desert where not a trace of distinction is to be seen, neither Father nor Son nor Holy Spirit.' By carrying out in radical fashion his Neoplatonically laden understanding of 'being one,' Eckhart transfers the essence or ground of God back beyond the divine God to the simple modeless, formless, unthinkable, and unspeakable purity that he calls, in distinction to God, 'godhead,' and that he describes as a nothingness."
(Ibid. p.158)
This "simple, modeless, formless, unthinkable, and unspeakable purity" that Eckhart calls "godhead" comes very close to the Buddha's description of nirvana as "the Unborn, Unoriginated, Uncreated and and Unformed" (From Udana VIII.3 in the Tipitaka) If the godless is formless, then its not the gendered god envisaged by most Christians, sat atop a throne with a long beard and flowing robes. This "silent desert" without "a trace of distinction" is not, as Eckhart clearly states, the Holy Trinity nor any one of its Persons, but is "a nothingness." As with Buddhist explanations of nirvana, the idea of nothingness can be easily misunderstood. As the forest monk Ajahn Sumedho has suggested, by writing the word as "no-thingness" we emphasize that it is not a thing, rather than point to nothing. In a similar effort, the term "No-thing" has often been used in the pages of 'Buddha Space,' under the influence of the British philosopher Douglas Harding. (Links to the Forest Sangha, of which Ajahn Sumedho is a senior member, and the Headless Way website, which based on Harding's teachings, can be found to the right of this webpage.) Ueda has further insights into Eckhart's concept of nothingness that may interest us:


"For Eckhart, the nothingness of the godhead is, in a non-objective manner, the soul's very own ground. Hence the soul, in order to return to its original ground, must break through God and out into the nothingness of the godhead. In so doing the soul must 'take leave of God' and 'become void of God.' This is accomplished only if the soul lets go of itself as what has been united with God. This what Eckhart understands by extreme 'solitariness,' the 'fundamental death.'"
(Ibid. p.158)
For the Christian word 'soul' Buddhists (and nonreligious types) can substitute the term 'mind.' Doing so, we can better relate to Eckhart's assertion that "the nothingness of the godhead is…the soul's very ground." In other words, these minds and bodies which are created things in a world of things are not self; indeed, there is no such individual, separate self. At heart, the "original ground" of our being, is this nothingness that is "void of God." Reading Eckhart's words carefully, it would seem that to achieve this realization, we need to practice meditation or silent prayer, and allow the soul (or mind) to let go of its self-identification which has surrendered to the idea of God (or Buddha) and rest in the godhead that is nothingness. This is because self is an entity, God is an entity, Buddha is an entity, and no-thingness is beyond all entities or things. Put another way, in Eckhart's view, surrendering to God is an important stage to full salvation (or enlightenment), but to achieve the latter we must let go of everything, dying as a separate self into the nothingness of what he calls the godhead.

"In Eckhart's thought it is the category of 'substance' that is,in the last analysis, definitive. But concomitant with this arrival at, and insistence on, the imageless and formless nature of substance pure and simple, Eckhart advances a radical de-imaging of the soul which is consummated in and as a ceaseless 'letting go.' This 'letting go' accords his teaching its extremely dynamic quality, corresponding to the dynamic of the Zen coincidence of negation and affirmation - except that in Zen, where we see a radical execution of the Mahayana Buddhist thinking on relatedness, the scope of coincidence is wider than it is in Eckhart."
(Ibid. p.160)
Ueda's philosophical language can be somewhat baffling at first - at least to this mind, it can - and so we need to decipher it to appreciate it basic meaning. By "substance," Ueda refers to that same nothingness that we have been discussing, and which is also known as 'the ground of being' elsewhere. By "a ceaseless 'letting go,'" Eckhart and Ueda refer to the process of realizing the truth of not-self. We can observe the world, the body, and even the mind (or 'soul') and see that none of them constitute a self, and in this realization we get to the heart of the religious life as envisaged by both the Buddha and Meister Eckhart. This "de-imaging" is the act of letting go with mindfulness, as in meditation and deep prayer. By the "coincidence of negation and affirmation," Ueda alludes to the Zen tradition of the koan that leads to an alogical experience of life, where we hear 'the sound of one hand clapping' and where opposites merge into a single, interrelated and interdependent understanding of existence. Ueda, as an advocate of Zen Buddhism proposes that it has a broader significance than Eckhart's theology of nothingness, which is an issue that the current author is unqualified to comment on.

In this article, along with several others (which can be linked to by clicking on 'Buddha & Eckhart' in the Buddha Space Reflection Series on the right of this webpage), the striking similarities between some of the Buddha's teachings and those of Meister Eckhart have been shown to be well worth reflecting upon for the open-minded Buddhist - not to mention the open-minded Christian! Whether or not you agree with the claims of Eckhart or this blog author, it is hoped that the material printed here has been interesting to you and has perhaps touched your beliefs or practices, or both. Reaching out to other traditions than our own can be of much benefit if done with kindness and consideration. It is not the claim of this author or others such as Ueda Shizuteru featured herein that the Buddha and Meister Eckhart experienced and taught exactly the same (No-)thing. There are notable coincidences within their respective teachings however, that glisten with the merest of polishings, and it is in this spirit that the Buddha & Eckhart Reflections have been offered. May all beings be happy!

Please click on the following link to go to 'Buddha Space,' the origin of this article: http://buddhaspace.blogspot.com/
Posted by G at 12:01 AM