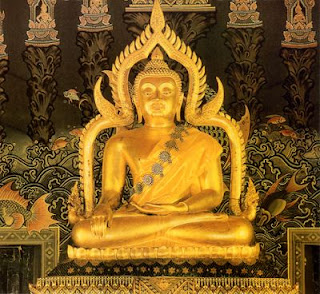 Visiting a Buddhist temple here in Thailand recently, I wished to pay respects to the main Buddha image. Asking the temple attendants where it was proved to be quite illuminating, as they didn’t know. At first, I thought that they couldn’t penetrate my far from perfect Thai language skills, for when a Thai colleague repeated my request they referred me to a statue that was hidden behind an immense curtain. Gazing up at the enormous image, however, I did not see the Buddha, but the replication of a famous monk that the temple complex was dedicated to; apparently, there was some confusion on the part of the temple staff as to what constituted a Buddha statue! I went back to the attendants and told them that this was not an image of the Buddha. They argued that it was until I pointed out that it was the statue of a monk and not the Buddha. The penny dropped. One of the attendants pointed to a smaller building a short distance away and said that the Buddha image was to be found there. After a brief trek across very pleasant surroundings – the temple complex seemed to be a kind of Buddhist theme park with lots of camera-wielding tourists – we found the Buddha statue, wrapped in what looked like a gigantic polythene bag. Either it was a newly-delivered statue or some scoundrel was attempting to asphyxiate the Lord Buddha! I bowed to the Buddha and then walked back to the main area where the temple attendants were selling various trinkets and other ‘Buddhist’ memorabilia to visitors.

This event set off a train of thought; why did the temple appear to view the Buddha with so little importance compared to this monk, who was said to have had magical powers? Usually, in countries like Thailand where the more conservative Theravada Buddhism is followed, the Buddha is always the central effigy found in a temple, not hidden away in a side building. Now, there are all kinds of possible explanations involving superstition, devotion, specialization and commercialism to name but a few, any number of which may well be contributory factors. But, more importantly, this inquiry led on to another, more fundamental one: What is it to search – and find – the Buddha? Sure, statues can be useful and aesthetic objects that enhance our lives, but no one suggests that they truly are the Buddha. The real Buddha is that enlightened part of us that is to be found right where we are now, and has been so wonderfully personified not only in the person of the historical Shakyamuni Buddha, but also in other enlightened ones such as Amitabha Buddha. Images, concepts and emotions can be used to bring us closer to the Buddhas, but is it not the Buddha within that is the true Buddha that will transform our suffering lives into happy ones?

This living Buddha is harder to find than those dead images, however, and all of the 84, 000 ways to awakening are geared towards enabling us to transcend ‘us’ and find the Buddha. Even devotion to a monk as opposed to the Buddha can assist in enlightenment – as long as it does not descend into a mere business or sect. For, if a monk – or anyone else for that matter – is awakened then they exist as an inspiration to our own search for the Buddha. For those of us that prefer to look for ourselves, however, statues, monks, gurus, and esoteric practices may seem somewhat over elaborate. And, for such people, there are more direct methods which can be employed to discover the Buddha within. One such method is the direct enquiry employed and promoted by the late British philosopher Douglas Harding. Although not Buddhist himself, Douglas saw the emptiness that lies not only at the heart of Buddhism, but also forms the ultimate objective of many great Christian, Muslim and Hindu mystics’ lives. Douglas was very keen to draw parallels between such luminaries and their Buddhist counterparts, especially from Zen Buddhism. Huineng (638-713), Bankei (1622-1693) and D.T. Suzuki (1890-1966) were particular favourites of Douglas’ (and mine). Let’s employ a few of Douglas’ ‘experiments’ and see what we come up with. It might just be enlightening!

Looking at the objects in front of you, see their ‘thing-ness’, that is to say, their colours, shapes, sizes, and general solidity. Now, turn your attention around 180 degrees to that which is doing the looking. What colours, shapes and sizes do you see here? Furthermore, is what you see at this end of your pointing finger solid or transparent? Is it a separate thing that keeps out all other things ‘out there’, or is it a ‘no-thing’ that is capacity for all the things you see to occur in?

Looking here and now, I can’t see a ‘me’ at my centre, but what is found is extremely fascinating – an alert void that contains, or is one, with all that can be seen. It is invisible, without any limited and limiting forms. All things can be seen within it, and it is neither confined nor defined by those things. It is that very emptiness that is the absence of me, and yet it contains those elements usually taken to equal ‘me’ along with all other things. It rejects not one thing, being completely open to them all. This openness is the impartial acceptance of everyone and everyone as they are right now, which the attitude of the Buddha. This is no coincidence, because the peaceful nonjudgmental heart that lies within us all is the Buddha. If we are searching for the Buddha, here ‘he’ is!

Listen to the sounds in your vicinity, hear their ‘thing-ness’, that is to say, their volume, rhythm, tone, and general audibility. Now, turn your attention to that which is doing the listening. What volume, rhythm, and tones do you hear here? Furthermore, is what you hear at the heart of all sounds audible or silent? Is it a separate thing that blocks out all other things ‘out there’, or is it a ‘no-thing’ that is capacity for all the things you hear to appear in?

If sounds are paid close attention to, they are just as efficacious as seeing in revealing the no-thing that is revealed through searching with an open mind. I cannot hear a ‘me’ here anymore than I can see one. Sounds arise, exist and die away in this ever-present silent void, which prefers no one sound over any other, simply being capacity for them to exist and be heard. Indeed, their being heard is their very existence. And, it is this equanimous silence that is the space in which they are heard. Pleasant or unpleasant, all sounds are given space to exist with this silent awareness. This is the impartial Buddha that hears the cries of the world, indeed the cries of the universe. All noise is accepted here, for there is no one to object to some sounds deemed nice and attach to others considered disagreeable. (Such thoughts and feelings of like and dislike still occur in the unenlightened mind, of course – until that mind dissolves into its inherently unbiased clarity.)

Watch the thoughts and emotions in your mind, notice their ‘thing-ness’, that is to say, their intensity, subject matter, morphing, and general mentality. Now, turn your attention to that which is doing the thinking and feeling. What intensity, subject matter and morphing do you notice here? Furthermore, is what you perceive at the heart of all thoughts and feelings mental or unimaginable? Is it a separate thing that contains all other things ‘in here’, or is it a ‘no-thing’ that is capacity for all the things you think and feel to exist in?

For some, it is much easier to accept that the self is not the body. They may well believe that it is thoughts and emotions that make up the human being, perhaps even containing some kind of seat of consciousness within the mind that many consider to be their eternal ‘soul’ or essence. This quite natural identification with being ‘me’ is the way that the human mind works for most of us, most of the time – until something happens that jolts the mind out of its usual assumptions of who and what the self is. Therefore, when the mind and its contents are experienced as arising in the void rather than from some central control centre, eternal or not, the association of self with mind is loosened if not broken altogether. (In traditional Buddhism, there are degrees of awakening such as the partially-enlightened ‘stream-enterer’ who has let go of the idea of being a self and the fully-enlightened ‘Arhat/Bodhisattva/Buddha’ who has let go of the feeling of being a self as well.)

Perhaps the reason that the Buddha is so hard to see is that we don’t really want to look. We fear what we will find: A great big nothing. But, the truth is that a great big no-thing lies at our heart, and the hyphen in these two words makes all the difference. The Buddha did not teach nihilism, the idea that there is literally nothing beyond these atoms that constitute our physical being. But, neither did he teach eternalism, the idea that there is a separate eternal ‘soul’ that survives death. He taught the Middle Way between these two extremes which attaches to no dogmas regarding this crucial question and leaves it up to experience to reveal the truth. Examining our own being with an open mind can enable us to experience this no-thing that contains all things. This is not a depressing event –unless we react from the ego – for we actually discover the unborn and undying nature that is the Buddha. To attach labels to it is of course troublesome, and none those that have been employed here should be taken as literal. Rather, they are figurative pointers indicating what is found to be here when all our assumptions and preconceived ideas and beliefs are put to one side. The search for the Buddha needn’t be so troublesome after all.

For more on Douglas Harding and his 'experiments', please click here:  The Headless Way
Posted by G at 12:01 AM

They make me remember these other ones: "If you find the Buddha in the way, kill him..."

That's right.. It's what lies within that matters.. what is beyond our comprehension and our ability to tanslate it into words...

Yes, Isis. The wordless truth...
As to killing the Buddha, that's impossible; "he" cannot be gotten hold of, let alone killed!