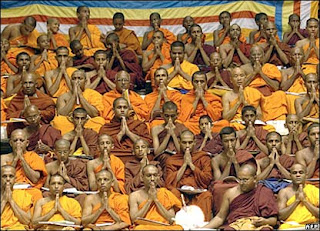 M
Monks: The only kind of Sangha?

The Sangha, or 'Community,' lies at the heart of traditional Buddhism. In the more conservative Theravada Buddhism, it has two main connotations: the Bhikkhu-Sangha, or the Order of Monks, and the Arya-Sangha, the Order of Noble Ones (the enlightened). A third usage, the Bhikkhuni-Sangha (the Order of Nuns), is more controversial, as the traditional lineage of fully-ordained nuns died out in Theravada Buddhist countries centuries ago. Attachment to long-established conventions prevents many Theravada Buddhists from recognizing attempts to reestablish this Order. So, in Theravada Buddhist countries like Sri Lanka, Burma, and Thailand, only monks or enlightened ones may be considered to be members of a Sangha. (And, in what others see as erroneous interpretations of the Pali Canon, many consider it impossible for laity to realize enlightenment, which means only fully-ordained monks are within the Sangha.)

In Mahayana Buddhism, which is more diverse and adaptive than Theravada Buddhism and found in places such as Japan, Korea, Vietnam, China, and Tbet, such classifications regarding who can be a member of the Sangha exist, but are much looser. For example, the Arya-Sangha clearly includes many lay Buddhists, both male and female. Furthermore, nowadays many Buddhist groups or communities consider themselves to constitute a Sangha. An example of this is the Dogen Sangha which has many branches in Japan and the West. This latter interpretation of a Sangha is found widely on the Internet.

E-Sangha is a popular virtual Sangha made up of both ordained and lay Buddhist members that meet online to share Buddhist teachings and advice. Of course, as with any Web-based message board or chat room, not all of the communications on such sites are, um, enlightening, sometimes no more than places to argue one's opinion. Virtual Sanghas do seem to be on the increase, however, and considering the fact that anyone visiting this blog is a member of what could be deemed the Buddha Space Sangha, it would seem somewhat churlish to dismiss the idea of an Internet Sangha out of hand.

So, what do you think, dear reader? Are you an ordained Sangha-member, an enlightened Sangha-member, or perhaps you see yourself as a member of the Wide Wide Web Sangha. Should the word Sangha set in stone with the traditional meanings as defined above, or is it, like Mahayana Buddhism - and, in truth, Theravada Buddhism as well - an organic entity that changes over time to suit the needs of current Buddhists? And, most crucially, what form do you think a modern Sangha should take?
Posted by G at 12:01 AM

Perhaps it's (yet another) character flaw of mine, but I have never thought this question (what is sangha?) was very important.

This is not the same as saying that sangha is unimportant. But I do fall into the group that experiences sangha in the broadest possible sense - people who relate to each other from a shared direction of awakening from dukkha.

Not everyone who shares this direction is Buddhist or even spiritual. I learned yesterday of a man who has been sober for 36 years but continues to go to AA meetings several times each week. He fully understands the nature of his suffering and is determined not to reignite it.

For me, this person is part of my sangha and his very presence inspires my own work of awareness and responsibility.

Interesting... this brought me to two places. One: does that mean, regardless, in this life I am only working toward clearing the way for the next being that follows my karmic path to be a Theravadin Buddhist analogue? In whatever shape that may take the next time around? And two, I enjoy thinking of the term of Sangha in the universal "every being that feels" kind of way. I read a Norman Fischer rendition of the Bodhisattva Precepts that brought me there... I think that's fair. All beings are of the highest family. "Oh nobly born..."

I am just a beginner in Buddhism, but received transmission of the Five Mindfulness Trainings from Thich Nhat Hanh last October. He stresses the need for a sangha to support ones practice. And I have finally succeeded in finding one in my area and am really happy about this. I also am on a yahoo group which discusses Thay's teachings, but is extremely quiet, and I read blogs such as yours and find support in many places. I don't think I could be rigid about what constitutes a sangha. And I agree that everything changes over time....Everything is impermanent.

Until I wrote that, I did not question if Buddah's teachings are also in this category. But perhaps those most basic teachings will not alter until all are enlightened. Will that mean life will cease? Ah, it is too late at night to continue this line of thought! Peace and Joy to all.

I am an ordained lay Buddhist minister/priest/dharma teacher, and I have always thought the Sangha should be very inclusive. I like the definition of "community of believers"

Sangha literally means "republic" and originally referred to the republican style governments in place during the Buddha's time. I feel that the Sangha as we know it today, especially in Theravada, and in Mahayana to a great extent, is rather removed from the Buddha's original concept.

I, too, believe this is an important issue, and I have some remarks about it in a post about "The Buddha" on my blog:
http://theendlessfurther.com

G, you seem to have skilfully introduced the Third Jewel of the ‘TRIPLE GEM’ that gives balance to being a Buddhist; the BUDDHA, the DHAMMA and now the SANGHA - so called on account of their matchless purity. Being UNIVERSAL and TIMELESS how can one of the ‘Jewels’ be labelled modern?

The Sangha provides the outer framework and the favourable conditions for all who earnestly desire to devote their life entirely to the realisation of the highest goal of Nibbana, unhindered by worldly distractions. It is the Order of Bikkhus or Mendicant Monks, founded by the Buddha and still existing in its original form today. Because of the shining Sangha we still have the rare opportunity to meet pure Buddhism, the message of Liberation and the Path leading to it. We should support the Sangha.

(Here in England, we have household Dana jars to collect loose change and contributions, we empty them together and count the money saved. Over the years money has gone to support Sangha in monasteries in Thailand, in England and for printing Dhamma books.)

As Kirsti said, it is a blessing indeed to have good friends (just as Jesus spoke of ‘wherever more than two of you gather in my name, there will I be...’) whether on the net or wherever there are two or more lay people keeping the Five Buddhist Precepts and sharing the Path – there will be the happiness and harmony of sangha...

Thanks everyone that has commented on this article: you have all written wisely on what constitutes the Sangha. 'The Poet's Apprentice' made some important points regarding the ordained Sangha, but I also feel drawn to this sense of an extended Sangha that includes people that may not have even heard the word 'Buddhiist' (or its equivalent in their own tongue).

In truth, sometimes the concept of Sangha that occupies this mind is the more traditional one (i.e. Oder of Monks/Nuns), but at other times a much wider definition seems preferable. Perhaps this kind of fluidity in thought is the way to go; neither clinging to one particular concept, nor accepting apparently contradictive ideas simultaneously. If that makes sense!

I would define a Sangha as a community of practitioners, whether it's on a very large scale such as in the monasteries, or, in a modern context, the immediate community that we practice with within our Dharma centres, study groups, etc.

this is quite a simplistic definition but one that I have found to be very warm and supportive. It doesn't make the community seem so far away and so highly advanced that we can't attain that same level as them. I like the idea that sangha is a community of practitioners just like you and me, supporting each other on similar path.

A skillful interpretation of the word 'Sangha' there, Trinley. I like the idea of us as fellow travelers on the Path, too. And by commenting on this article, you have supported your fellow travelers - thank you!

Gary, you said: "In truth, sometimes the concept of Sangha that occupies this mind is the more traditional one (i.e. Oder of Monks/Nuns), but at other times a much wider definition seems preferable. Perhaps this kind of fluidity in thought is the way to go; neither clinging to one particular concept, nor accepting apparently contradictive ideas simultaneously. If that makes sense!"

On the other side of it, though, it presents a common problem with language. Words change meaning over time, certainly, but sometimes there is an intent to change a word's meaning to suit a purpose.

It's part of our nature to want to mold things - including the meaning of words - to our liking. But in the end, it is dukkha and its causes we must condtend with. Even though we each have to confront dukkha individually, it helps to have the support of wise friends and teachers.

Whether it's THE Sangha (composed of the eight pairs of noble beings) or my sangha (the people I sit with once a week), it really doesn't matter. What matters is, I need all the help I can get.

"What matters is, I need all the help I can get."

Well put, Paul; Sangha is a crucial support to us in our endeavors to live the Buddhist Way.

I see myself as the member of World Wide Web Sangha and I hope it doesn't offend you.
I have been reading many articles and teachings and I have involved in many Buddhist forums and blogs.
I have found this very astonishing, and I am trying to develop much knowledge though it's not as fruitful as practical knowledge.

WWW Sangha sounds fine to me, Antique Buddha, if it works for you. Different types of sangha can be expressions of skillful means (upaya in Sanskrit & Pali). All the best to you on your Buddhist journey.