A Buddhist Reflection on Stonehenge 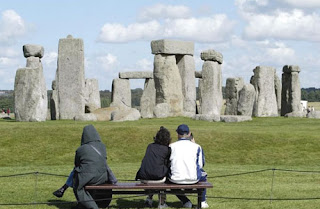 As it says in the column on the right, I’m a British Buddhist. My hometown is a small city in the English county of Wiltshire called Salisbury, also known historically as Sarum. So, you could say that I’m a Sarumese guy living amongst the Siamese. A more traditional moniker for someone who was born in Wiltshire is a Moonraker, derived from a quaint story about smugglers who hid contraband alcohol in a river. When they returned at night and raked the water to retrieve their booty, they were confronted by some men of the law. To explain away their odd behavior, the smugglers said that they were raking the moon from the river, as its image was reflected in the water! I’ve never ascertained as to whether this bizarre excuse worked or not – but something tells me that that’s not really the point, anyhow.

Not many people know the above tale, but one thing pertaining to Wiltshire that is known around the world is the giant megalithic structure called Stonehenge, that lies at the heart of the shire. As a Moonraker, the Stones, as Stonehenge is also known, are a powerful symbol of where I come from, situated a few miles north of Salisbury. But, as a Buddhist, rather than a Druid, I’m led to consider what they actually mean to me, if anything. Contemplating the structure of Stonehenge leads me to think on the Three Characteristics (of existence), a central element in the Buddhadharma, the Buddhist teachings. Of these universal characteristics it is taught that all things are impermanent (anicca), imperfect (dukkha), and impersonal (anatta). The Stones are very, very old – over four thousand years old. No doubt they have aged dramatically during that time, and do not look exactly as they did when first erected. They are enormous symbols of the impermanence, despite their great age, slowly crumbling away.

Stonehenge is by no means perfect, either. The original pattern in which the megaliths were placed has been disrupted, with some of the rocks broken and lying at odd angles to one another on the ground. They are subject to dukkha, to being imperfect. (Dukkha is usually translated into English as ‘unsatisfactory’ or ‘suffering’, but also carries the connotation of imperfection.) If they were perfect, the Stones would still be in the same positions as they were four millennia ago, but of course they’re not. As with everything else, they are vulnerable due to their very nature as conditioned phenomena. Another way in which the Stones symbolize dukkha is their inability to reveal much about themselves. This can be both intriguing and frustrating!

Little is known about the origins and early history Stonehenge because no carvings or other ancient records from the time of its construction remain that might refer to its makers or original purpose: there it stands on a hill as though dropped there by some unknown pagan gods, or as some more imaginative theorists would claim, by aliens! In truth, we don’t know who made Stonehenge, for as it is barren of any calligraphy or imagery, its makers remain as anonymous (or ‘selfless’) as the featureless Stones they erected. In this impersonal aspect of their appearance, they symbolize anatta.

So, returning to my query above, as to what the Stones mean to me, my answer as a Buddhist is unsurprisingly dependent upon the Dharma: Stonehenge encapsulates the Three Characteristics, standing as a colossal reminder that all things are under the sway of impermanence, imperfection, and selflessness. Applying these reflections to our own selves, we begin to see through the assumption of self and the suffering that necessarily follows from thinking of oneself as inherently separate from the world and therefore in conflict with it. In truth, there is no self, and like the giant Stones north of Sarum, to silently play witness to the conditions that constantly arise then fall away is the best that can be done – unless one wants to rake after a moon that dissipates upon closer examination.

The above post first appeared on the blog 'Forest Wisdom,' which was reborn as this one.
Posted by G at 7:55 AM

Sarum. I've read a lot of books and seen movies and tv fictions about Salisbury and the "mistery" of the stones.
Now I'm 39 year old, I don't believe in myths and fairy tales, but I think that place is very fascinating anyway.

Sure, Neurobi. Myths and superstitions can be very interesting, even if not taken literally, but Stonehenge has many things to tell us irrespective of the tales that surround it. We simply have to pay attention.

ALLAH THE ALMIGHTY IS ALREADY ON EARTH!!!!!

Please stop in http://manaalmahdi.wordpress.com
Please refer to someone incharged fitted whatever doctrine you are. This is an exceptionally distinguished essence fitted all mankind.
Thanks.

Visited your blog as invited, but as it's in Malaysian (I think!), didn't have a clue what it says about your doctrine that Allah is already "on" Earth, nor what this has to do with reflecting on Stonehenge.

The sign of The Almighty's arrival: A face in the sky video
http://www.youtube.com/watch?v=bIsZ9bXqhxA

A face in the sky may well be interesting, Krulayar, but have you seen your Buddha Face?