Review: An Introduction to Zen Buddhism, by D. T. Suzuki 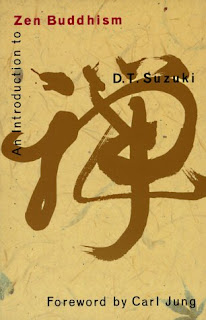 "No amount of reading, no amount of teaching, no amount of contemplation will ever make one a Zen master. Life itself must be grasped in the midst of its flow; to stop it for examination and analysis is to kill it, leaving its cold corpse to be embraced."
(An Introduction to Zen Buddhism, p.102)

Born in Japan in 1870, Daisetz Teitaro Suzuki (鈴木 大拙 貞太郎) is the man often credited as introducing the West to Zen Buddhism, through his many books and essays, written in both Japanese and English. He also wrote on Shin Buddhism and Christian mysticism, as well as translating major Mahayana Buddhist and Daoist scriptures into English for the first time. As a professor, he lectured in many universities around the world and resided at Otani University in Kyoto, Japan for many years. He tirelessly promoted Buddhism in both Japan & the West until his death in 1966. His legacy still lives on through those people that he met and influenced through his work. An Introduction to Zen Buddhism is one of the more famous works of the late Suzuki, and it is the most concise description of the subject this reviewer knows of, or at least of the Rinzai sect of Zen that Suzuki ascribed to. As such, it cannot be bettered, introducing its reader to satori, koans, and those incredible Zen masters. Here's an example of his skill in writing of Zen, a notoriously difficult subject to put into words:

"The truth is, Zen is extremely elusive as far as its outward aspects are concerned; when you think you have caught a glimpse of it, it is no more there; from afar it looks so approachable, but as soon as you come near it you see it even further away from you than before. Unless, therefore, you devote some years of earnest study to the understanding of its primary principles, it is not to be expected that you will begin to have a fare grasp of Zen."
(Ibid. p.13)

The whole point of Zen practice is to experience satori, or awakening, which is the initial glimpse of enlightenment. This comes after a long period working with a koan (a kind of Zen riddle), a practice Suzuki describes with great skill in this book. A student is given a koan by his Zen master, with which he or she must grapple until they see its true meaning, which is also the meaning of Zen. Examples of the koan given in the book include "When your mind is not dwelling on the dualism of good and evil, what is your original face before you were born?" (Ibid. p.74) and "The cypress tree in the courtyard" (Ibid. p.76). Of the koan, Suzuki writes:

"Ko-an literally means 'a public document' or 'authoritative statute' - a term coming into vogue toward the end of the T'ang dynasty. It now denotes some anecdote of an ancient master, or a dialogue between a master and monks, or a statement or question put forward by a teacher, all of which are used as the means for opening one's mind to the truth of Zen. In the beginning, of course, there was no koan as we understand it now; it is a kind of artificial instrument devised out of the fullness of heart by later Zen masters, who by this means would force the evolution of Zen consciousness in the minds of their less endowed disciples."
(Ibid. p.72)

As to the efficacy of Suzuki to communicate the essence of Zen, this reviewer can attest to his superb skills in this area, especially in relation to the current volume. Many, many moons ago, as I sat reading An Introduction to Zen Buddhism, something peculiar and wonderful happened: 'I' saw what Suzuki was getting at. I put the first-person singular in apostrophes here because at the heart of that experience there was no 'I' present. there was the book, my hands grasping it, the room that I was sat in, but no 'I.' Sunlight poured through the white net curtains, but it wasn't this that gave an illumined quality to the room, it was the light of satori that shone so bright. In that moment - which is this moment - awareness was one with the room, the book, and with the long-deceased D.T. Suzuki. (For the full article, click here: Daisetz Suzuki, Satori, & 'I')

"Zen thinks we are too much of slaves to words and logic. So long as we remain thus fettered we are miserable and go through untold suffering. But if we want to see something really worth knowing, that is conducive to our spiritual happiness, we must endeavor once for all to free ourselves from all conditions; we must see if we cannot gain a new point of view from which the world can be surveyed in its wholeness and life comprehended inwardly."
(Ibid. p.31)

The book also includes sections on Zen's illogical nature (described above) and whether it is nihilistic or not, as well as a somewhat less cerebral chapter on the life of a Zen monk. The latter is an important addition to the work which denies the interpretation of Zen as a kind of libertine hedonism. In it, Suzuki illustrates in his usual concise manner the simple, disciplined, and moral life of a Zen monk in training. The role of the Zendo, the meditation hall, is also a feature of this final part of the book, with the author waxes lyrically in its praise. What is wondrous here, however, is the direct, and - as Suzuki puts it - "radically empirical" (Ibid. p.102) understanding that is satori that lies at the heart of this book, and if you fancy knowing this for yourself, this reviewer wholeheartedly recommends that you read An Introduction to Zen Buddhism. Kwatz!