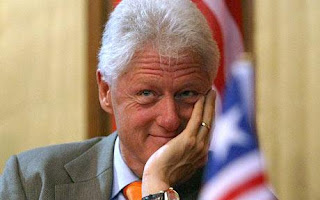 Recent reports that former US president Bill Clinton has turned to Buddhist meditation are both fascinating and tantalizing. Apparently, he has taken up the cushion in order to help with a heart condition and the stress that affects it. Mr Clinton has had two heart operations in the past decade, so this is no frivolous undertaking, but a serious attempt to improve his health. Moreover, the recognition that only a holistic approach to his condition which takes into account both mental & physical factors is an important lesson that he appears to have learnt. That a man that formerly had 'his finger on the button' now meditates under the tutelage of a Buddhist monk begs the question, "What if an acting US president were to become a Buddhist?"

Just imagine how a meditating Buddhist president might respond to the Middle East conundrum, or US gun laws, or gay marriage legislation. After spending twenty to thirty minutes in meditation every morning, wouldn't this president be cool & compassionate in their approach to world affairs such as Third World debt relief and global warming? Surely having calmed his mind, such a president would think twice about committing American armed forces to invade another Muslim country. (Mind you, wouldn't any American president do as much after the struggles in Afghanistan & Iraq? Don't be so sure…) And poor Americans across the fifty states could look forward to a more sympathetic White House administration, ready to dish out the dollars to those in need.

How different things might have been if President Assad had taken up Buddhist meditation not long after inheriting his dad's premier position in Syria. No awful suppression of his own people, ordering the torturing, raping & murdering of them in a desperate bid to retain his grip on power. No support of terrorism in the neighboring states of Lebanon & Israel, enabling extremists to bomb innocent bystanders in their bloody thirst for dominance. And certainly no ruthless extermination of Syrian dissidents; a meditating dictator always has time to negotiate peaceful solutions to his subject's grievances!

Enough of all this tongue-in-cheek banter. A far as is known, no incumbent US president has been a meditator, and if one was, it's unlikely that they would admit to it, as this would not exactly endear them to the millions of Bible Belt Christians. "Friggin' Buddhist in the White House? I'd rather have the Pope!" And, even if a meditating politician made it into the highest office in America, would they allow it to affect their decisions regarding crucial domestic & international issues? No way, Buddha! Truth is, the kind of person driven to be US president - or any other country's president - is unlikely to be the type of person to take up meditation whilst in office. And, if later they did start up crossing their legs, it would have to be something pretty terrible to get them to do so.

Which brings us back to Mr Clinton. If the stories are true, and he is now using Buddhist meditation to live a longer, healthier & happier life, this is good to read. May it help him achieve those goals. Moreover, although he has started meditating too late to affect his time in office, he is still a widely liked & respected man that many take notice of. In his example, the world may have a public figure that inspires an interest in Buddhist meditation, and hopefully other aspects of Buddhism too. As to Buddhist presidents, it is worth noting that recent rulers and army generals of Sri Lanka, Myanmar, and Thailand in all likelihood genuinely considered themselves Buddhist. And look at the atrocities they committed in their countries. They should have spent more time on the meditation cushion.
Posted by G at 12:00 AM