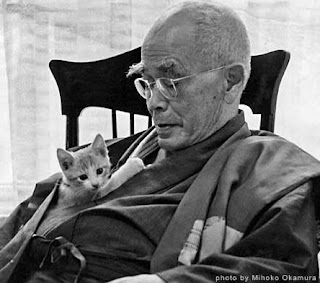 D.T. Suzuki is the cat!
“Satori may be defined as an intuitive looking into the nature of things in contradistinction to the analytical or logical understanding of it. Practically, it means the unfolding of a new world hitherto unperceived in the confusion of a dualistically-trained mind. Or we may say that with satori our entire surroundings are viewed from quite an unexpected angle of perception. Whatever this is, the world for those who have gained a satori is no more the old world as it used to be; even with all its flowing streams and burning fires, it is never the same again.”
(From ‘Zen Buddhism: Selected Writings of D.T. Suzuki, pp.98/99)
Many, many moons ago, as I sat reading words like these written by Daisetz Teitaro Suzuki, something peculiar & wonderful happened: ‘I’ saw what he was getting at. I put the first-person singular in apostrophes because at the heart of the experience was there was no sense of an ‘I’ present. There was the book that I’d been reading, my hands grasping it, the room that I was sat in, but no ‘I’. Sunlight penetrated the white net curtains, but it wasn’t this that gave an illumined quality to the room, it was the light of naked awareness that shone so bright. In that moment – which is, in fact, this moment - awareness was one with the room, the book, and with the long-deceased D.T. Suzuki. All was/is satori.

What is satori? Well, etymologically-speaking, it means ‘understanding’. Not just any understanding, however, such as understanding how a watch works, or what one plus one is, but a deeper, non-intellectual understanding that precedes all such thinking. It is seeing things as they really are (the Dharma), unfiltered by the delusion-ridden mind. Back in that initial glimpse of the deathless, all was suddenly well. Anxiety disappeared; hopes and fears were non-existent, replaced with the totality of the present experience. Into this emptiness-that-contained-all rushed a feeling of quiet bliss which seemed to flood the room with its sweetness. A few moments on, and the first thought arose: if ‘I’ die now, it doesn’t matter!

This particular thought came up from the depths of my subconscious in response to a kind of koan (Zen-riddle) that had preoccupied me for several months over recent months – an intense and growing fear of my own mortality. What better answer to this fear-of-fears than the realization that death really doesn’t matter? And this response had not come out of a rational process, but had spontaneously burst forth from the state of being completely in the present, unhindered by any anxious thoughts. It was – and is – the experience of oneness with the very core of Daisetz Teitaro Suzuki, which was not the man’s body, nor his undoubtedly impressive knowledge of Buddhism, nor any other quirk pertaining to his individuality. It is the union with that which lies at the heart of us all, summed up in his Dharma (Buddhist) name, Daisetz, which means ‘Great Simplicity.’

All this is not meant as some kind of promotion of myself as being realized or enlightened, for that particular path is not the Path, and leads to an egoistic interpretation of spiritual awakening that is the death of genuine wisdom. The above is intended to illustrate how ordinary people (and I am ordinary, please believe me!) can have genuinely transformative experiences as written about by such luminaries as Doctor Suzuki. Satori, or the transcendence of ‘I’ is available to any of us that seek it wholeheartedly, and can be cultivated by practicing the Eightfold Path of the Buddha, which ‘I’ have endeavored to do since that wonderful day a quarter of century ago on the other side of the world.

Indeed, I have met many people over the years that have had similar, if not identical, experiences to mine, having their world views inverted by sudden insights into the way things are. According to their accounts, such experiences are neither restricted to Buddhists of a particular sect, nor even to Buddhists in particular. It is the natural state of the human mind that can break through the ignorance of self-delusion whatever the beliefs of the person involved. And now let’s turn attention to you, dear reader: What transformative experiences (transcendent or not) have you had walking the Buddha Way? How has living life in light of the Buddha Dharma changed your life for the better? If someone asked you how you had benefited from practicing Buddhism, what would your reply be? Please feel free to share your experiences by clicking the link below marked ‘comments.’
Posted by G at 12:01 AM

The most important changes( and still evolving) is a relaxation about everything, and the reduction of anger from its simplest forms of minor irritation to its full blown state. Meditation has allowed me the space to see what happens in my mind and consequently my body. I enjoy Buddha's teaching that allows one to discover first hand how it is applicable to your life. And after becoming a novice for a month, I was able to experience the wisdom of monks that have been on this path for a long time. I have less fear and more joy.

Typical benefits of the Buddhist life, 'Was Once.' It is good to read of these wonderful effects that practicing Buddhism has had on you.

Wonderful post. I have been humbled to have experienced moments of satori. Glimpses of full enlightenment that encourage me to keep practicing. I'm not enlightened either but as he said, my life has never been the same since.

Good to read of your similar experiences, James.

Without such experiences, the practice of Buddhism could well become very dry & intellectual, couldn't it? Knowing the emptiness at the heart of life is very different to knowing about it, and is living the Buddhadharma as opposed to believing in it.