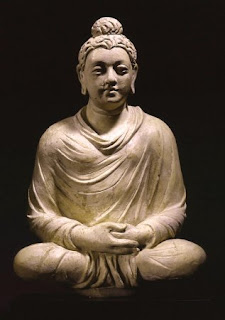 The Buddha's Philosophy is a reprint of a book originally published in 1959. Many older books on Buddhism often have subtle (and sometimes not-so-subtle) misconceptions about its teachings, but this work is spot on. It is divided into two parts, the first an introduction to the subject matter penned by the author, and the second comprising translations from Buddhist scriptures. The balance between the two is nice, although more pages of actual translations might have been beneficial to the work as a whole. (The ratio is 82 pages of introductory material & 70 pages of translated texts.) This minor grumble does not deny the book's value, however, and as a primer on the essential teachings of the Buddha as found in the Canon, it is excellent. The following section on Nibbana (a synonym for Buddhist enlightenment) is typical of the book:

"It is not surprising that early European scholars came to the conclusion that Nibbana meant annihilation. But to call it so is a misleading half-truth; Nibbana is the result of the annihilation of ignorance, of the annihilation of sorrow. In one word, Nibbana is CESSATION - the cessation of the process that is motivated by ignorance. 'The cessation of becoming is Nibbana (S ii, 68).
Nibbana is cessation! A more positive description or definition than this of the goal of the Buddhist cannot be expressed in words, for no words describe the indescribable. The early Pali texts name it 'rare', 'peaceful', 'beyond reasoning', 'subtle' …"
(The Buddha's Philosophy, p.34)

The Pali Canon is known in the scriptural Indian language in which it was composed as the Tipitika, which roughly translates as the 'Three Collections.' Whilst it is recognized by the other major branch of Buddhism that is prevalent in China, Japan and Tibet, Mahayana, it has been superseded by subsequent, and doctrinally somewhat different, scriptures. It is within Theravada Buddhism (which is found in Sri Lanka, Burma & Thailand) that the Pali Canon is revered as the teachings of the Buddha, sometimes in an almost fundamentalist manner. (Peacefully fundamentalist, that is!) The Buddha's Philosophy does not fall into this trap, however, recognizing the historical development of the Pail Canon, which is of much credit to its author.

"In attempting to work out a chronological sequence of the contents of the Pali Canon, other factors than the mere nature and doctrinal significance of the texts are to be considered. The language and its etymology sometimes offer important clues as to the age of its subject-matter. The suttas of the Attaka Vagga of the Sutta Nipata exhibit characteristics of some early, Upanishadic style in India sacred literature. In the later canonical Pali, two further strata are apparent: the metrical portions of Udana, Iti Vuttuka, Thera-Theri Gatha and Jataka contain gatha or verses that are now considered to be older than the prose context in which very many of them stand."
(Ibid. pp.93-94)

The work's author & primary translator - some texts are products of the Pali Text Society - is G.F. Allen. Unlike most western translators of Buddhist texts, Allen had actually been a Buddhist monk, giving him access to traditional insights into the Pali Canon denied to many occidental scholars of the subject. This monastic affinity with the subject matter gives the book an overall feeling of credibility when Allen presents the material. And this he does in a clear, methodical manner - the extract above is unusually dense when compared to most of the book. It does illustrate the author's knowledge of his subject, however. The Introduction, named Buddha and Dhamma, is a step-by-step guide to the historical context of the Buddha, his life, and his teaching (as found in the Pali Canon). It includes a wonderful explanation of the Dhamma (the Buddha's teaching), reminiscent of the famous work by Dr Walpola Rahula called What the Buddha Taught. Like that work, this book enables its reader to gain a grasping of all the basic teachings of the Buddha, as well his life & person. This is followed by a second section containing the translations, called The Teaching: Dhamma and Discipline. Here are some extracts form this part of the book:

"These two extremes are not to be practiced by one who has abandoned the worldly life. What two? On the one hand indulging in sensuous pleasures, which is low, coarse, vulgar, ignoble, and useless; and on the other hand indulging in self-torture, which is painful, ignoble, and useless. Avoiding these two extremes the Tathagatha teaches the Middle Way that brings insight and knowledge, and leads to calm and wisdom, awakening, Nirvana."
(Ibid. p.105)
"Disciples, when other people adversely criticize me, or criticize the Dhamma or the Sangha, you should not feel annoyed or perturbed, nor bear ill-will. For if you, as the result of such criticism, become angry and put out, that would upset your equipoise. If, when others criticize, one experiences anger and bitterness, would one be able to estimate accurately the pros and cons of the criticism?"
(Ibid. pp.153-154)
"Furthermore, monks, when one is walking one knows 'I am walking'; when one is standing one knows 'I am standing'; when one is sitting one knows 'I am sitting'; when one is lying down one knows 'I am lying down'; in whichever of these position one's body is, one remains aware of it."
(Ibid. p.161)

So, in this reviewer's opinion, The Buddha's Philosophy is an excellent introduction to the life & teachings of the Buddha, as found in the Pail Canon. It does not include any of the scriptures credited to the Buddha found in Mahayana Buddhism. Because of this, its scope is somewhat limited, like that similar work mentioned above, What the Buddha Taught. This is not, however, such a terrible thing. Books that include both Theravadin and Mahayana philosophy can be notoriously difficult, and are probably not best suited to first-time readers of Buddhist teachings. The basics are all here; the four noble truths, the noble eightfold path, the three characteristics, enlightenment, and dependent arising (here rendered as 'Causal Formula'). Important texts from the Pali Canon are included also, such as the Buddha's first & second discourses, the monk's 'patimokkha' rules, and the Satipatthana Sutta (a treatise on mindfulness as the way to enlightenment). Reading these works can instill in the reader a conviction that they represent true reality, and that to walk the way of the Buddha is to move towards enlightenment. Allen's work here enables us to make the frost tentative steps towards enlightenment; if you are ready, buy this book, and wad on!