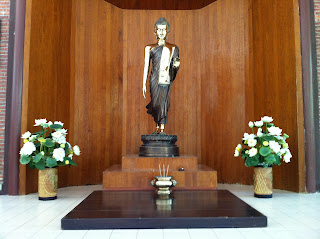 The Buddha taught many meditation & mindfulness techniques. One of them, called cankama in the Pali Canon (the Theravada Buddhist scriptures), was a form of mindfulness practice that he was particularly keen on early in the morning. In English, this is known as walking meditation, although this is somewhat misleading as Buddhist meditation involves the development of absorptive concentration which is done in the classic cross-legged position. Becoming unaware of the physical surroundings in one of these states of mind whilst walking could be pretty dangerous, if it's possible at all. In truth, cankama is more 'mindful walking' than walking meditation, but the latter term seems to have entered the English language Buddhist lexicon already, so we're stuck with it. 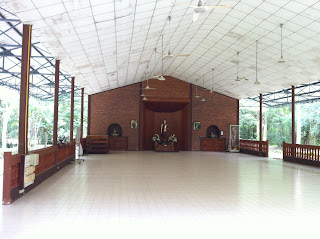 Mindful walking was not only a favorite practice of the Buddha. To this day it has remained a mainstay of both the Theravada & Zen forms of Buddhism. In Zen, it is known as kinhin (経行) in Japanese, and is practiced in-between long periods of zazen (sitting meditation). In Thai, mindful walking is called jong-grom (จงกรม), and is usually practiced on a designated stretch of land or floor.In the lineage of Ajahn Chah, it is widely used as a way to cultivate the long-lasting concentration referred to in the Cankama Sutta above. So, here in the International Forest Monastery in Northeast Thailand, I decided to use the sala (pavilion) situated in the forest to do a bit of mindful walking…with the Buddha watching over me. 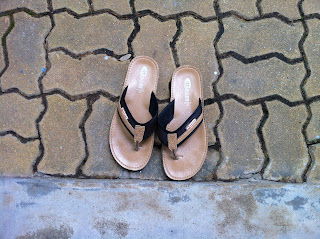 In Thailand, when entering a temple building - and many other places such as people's homes and some businesses - it is customary to remove one's footwear. Not to do so is considered most impolite, especially in a temple, and it can be very dirty too, as soil etcetera is trampled everywhere. So, prior to entering the sala, my flip-flops were deposited outside its perimeter, awaiting my return. Actually, being barefoot is great for mindful walking as it enhances the sensation of the feet touching the surface over which they are traversing. This, in turn, assists the mindfulness aspect of the practice, as the heightened feeling encourages attention. 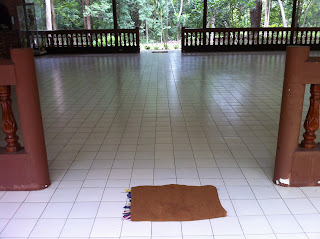 I chose a section of the sala just in front of the Buddha statue, which itself is an image of the Lord Buddha walking. The tiled floor is nice and cool in the sala, so it has a nice soothing sensation on the feet as they paced up & down the two mats placed at two entrances of the sala. Focusing on the feet as each one touches the floor & then rises up, mindful walking is indeed a pleasant way to develop concentration. The trees at each end of the walk waved in the wind, as if encouraging my efforts. After a short time, awareness came to rest on the motion of the feet, and the view of those trees as they enlarged with each approach. Broadening out awareness to take in everything in view, I looked downwards. And this is what I saw: The one doing the walking was without a head! 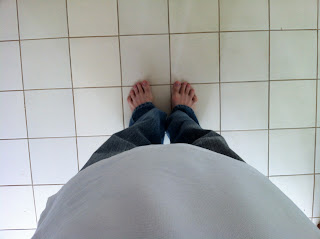 This is the view ever before me, but I am not always aware of it, despite being introduced to it by the teachings of a British philosopher called Douglas Harding nearly a quarter of a century ago.As he taught, however, this fluctuation between seeing what is thought to be here & what's actually seen is quite natural. Moreover, it's a fun way to cultivate mindfulness, being awake to the emptiness where others see a head. This doesn't mean, in my experience, that I don't have a head - I can feel it here. But it does point at, most directly, the emptiness that lies behind my face. One might call it, as many Zen masters have, the original face. Walking in this emptiness is a freeing experience. Whilst it is not an avoidance of everything that's present, it puts it all in a wider context than is normally experienced. So, rather than identifying with the headed self and all its concerns, we can act out of this spacious awareness, as the very emptiness in which all that is known arises. 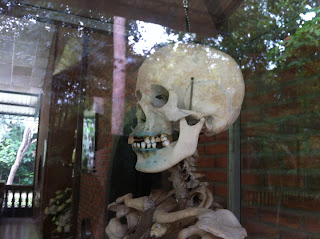 As a bleak reminder as to why we might want to practice something such as mindful walking & seeing our nature as it is right now, the sala has a rather grim occupant. It is the skeleton of a woman that died many moons ago, and donated her remains to the monastery to use as a subject for reflection. (Presumably, she promised her body to the monastery prior to her demise, although here in Thailand you can never be too sure about these things!) So, there seems to be a choice here: remain committed to the idea of being a mortal being that will one day end up as bones, or look into actual experience and discover what the Buddha called the deathless (amatapada). Mindful walking & 'headless awareness' are two bonafide ways to develop awareness and see what we truly are. Then, we are free of death and suffering. Try it sometime!

*Cankama Sutta: Walking (AN 45:29), translated from the Pali by Thanissaro Bhikkhu. Access to Insight, 17 February 2012,
Link. Retrieved on 27 June 2012.
For more on the teachers mentioned in this article, Ajahn Chah & Douglas Harding, please click on the tab marked 'Teachers' above.
Posted by G at 2:16 PM