Review: The Healing Power of the Breath, by Brown & Gerbarg 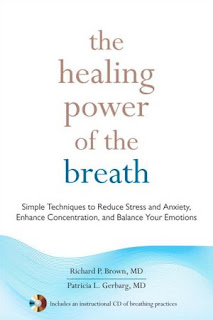 Scientific & medical experts are really starting to examine & utilize meditation & mindfulness techniques. Usually taken or adapted from time-honored practices found in Buddhism and other similar traditions, these techniques are now being incorporated into modern medicine. A fine example of this is the work being done by Richard P. Brown, MD & Patricia L. Gerbarg, MD, the authors of The Healing Power of the Breath. In this ground-breaking book, the two professors of psychiatry (who are married to each other) present practical breath-based techniques for calming the mind & body. They also document research backing up ancient claims that such techniques are solutions to everyday stress and mood problems. Indeed, they argue that the exercises upon which this work is based can relieve stress-related anxiety, depression, insomnia, and trauma-induced psychiatric problems.

"Breathing can alleviate negative feelings, such as fear, anxiety, frustration, anger, depression, self-blame, confusion, restlessness, and physical discomforts. With regular practice over time breathwork can bring improvements in physical health, physical endurance, and resilience. But breathing is not just a treatment for life's ills,; it can also enhance pleasurable and creative activities such as musical performance, writing, team sports, or just being with nature. Breath practices nurture positive emotions, loving feelings, compassion, our sense of connection with what is meaningful in life, and our sense of bonding with others."
(The Healing Power of the Breath, pp.58-59)

Whilst not a Buddhist book as such, The Healing Power of the Breath should be of interest to any modern-minded Buddhist interested in the areas of mindfulness application and medicinal meditation. To more tradition-orientated Buddhists, however, it may seem somewhat superfluous to requirements in that it doesn't address the central Buddhist objective of nirvana. For the latter, then, this work is probably not worth the cover price, whereas for the former, it could prove an extremely worthwhile purchase. Moreover, for all those who are not interested in Buddhism (or any other 'ism,' for that matter), Brown & Gerbarg have written a potentially life-changing book.

This is a big claim, but for those of us suffering from anxiety, depression, ADD (attention deficit disorder), PTSD (post-traumatic stress disorder), or other psychiatric problems, The Healing Power of the Breath contains the means to radically improve our lives. In it, the two authors introduce several breath-based exercises that can calm down those using them and help them find a peaceful space within themselves. The main practices are called 'Coherent Breathing,' 'Breath Moving,' 'Resistance Breathing' & a combination of the three called 'the Complete Practice.' Due to lack of space & time, this review cannot go into great detail of all the techniques presented in the book, so it will suffice to describe the first, basic practice called Coherent Breathing,' as the other exercises are built upon this one.

"Coherent Breathing is a simple way to increase heart-rate variability and balance the stress-response systems. When scientists tested people at all possible breathing rates, they found that there is an ideal breath rate fir each person, somewhere between three and a half and six breaths per minute fir adults using equal time for breathing in and breathing out, a sweet spot where the HRV is maximized and the electronic rhythms of the heart, lungs, and brain become synchronized. Modern researchers have called this the resonant rate,but this phenomenon has been known fir centuries by religious adepts in many cultures. For example, when Zen Buddhist monks enter deep meditation, called zazen, they breathe at six breaths per minute."
(Ibid. p.12)

Along with the other breath practices in the book, this technique is found in a guided exercise on the accompanying CD. Narrated by Richard P. Brown, this five minute exercise takes the listener through the development of Coherent Breathing by slowly slowing down the speed of in and out breaths. This is down by Brown as he calmly instructs his listener to breath in time to his counting, and is very effective, as this reviewer can attest to, having gone through the exercise himself. One small gripe is the reference to related resources found on a website on the internet. When researched into, it was found that they are not free, and that someone that cannot get going with Coherent Breathing is encouraged to go to this website and order a CD or download to complement this book. As this book is not overly long, could not the exercises referred to as being on this other CD (which is by a different person, by the way) be included in the present work and its CD? (At roughly 70 minutes, the CD could have had a few extra exercises on it.)

Nevertheless, Brown & Gerbarg have put together a good book. And, if the reader were to doubt their word alone for the efficacy of the breath practices that they promote, plenty of evidence is given to back them up. Much of it is from people that have actually used breathing to improve their lives, either as therapists or patients. An example of the latter is given in Chapter 4 where a education consultant that attended a workshop conducted by the authors. Working in a big inner-city school, she used the breath to deal with stress, both for herself and a "shocked" colleague (pp.59-60). Elsewhere in the book, much fieldwork is presented in relation to disasters where breath exercises have been used to deal with trauma afterwards, including 9/11 victims, survivors of the 2004 Asian tsunami, and the Haiti earthquake of 2010. Writing of genocide survivors in Rwanda, the authors state the following:

"Global Grassroots' Academy for Conscious Change in Rwanda has incorporated breathwork, yoga, meditation, mindfulness, and other conscious exercises into its eighteen-month social entrepreneurship program for women in Rwanda since the program's founding there in 2006….even now, seventeen years after the genocide, mind-body techniques, especially the core Breath~Body~Mind practice, can provide psychological healing that is essential for personal transformation as well as social change. Years after their initial training, the women continue to utilize these practices to support their recovery and to manage stress from their life of poverty."
(Ibid. p.78)

Books like The Healing Power of the Breath are important. They are helping people to deal with everyday stress and even serious medical disorders. Besides this, they also stack up the evidence that meditation & mindfulness exercises can be beneficial to us on many levels. Brown & Gerbarg reveal to their reader both of the above with clarity & warmth. The breath exercises described in the book, along with the CD, enable people to take some level of control over their lives, giving them the tools to deal with stress, anxiety, and many other psychiatric difficulties. Therefore, The Healing Power of the Breath gets the thumbs up from this reviewer, and it is hoped that anyone reading the book takes the time to actually do the exercises it contains, using them to let go of the suffering that we all create in our lives.