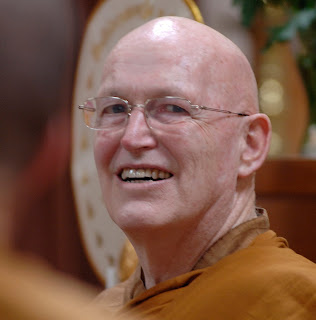 Ajahn Sumedho...now you see him, now you don't!

Those of you that read Buddha Space regularly will know that Ajahn Sumedho is one of the main influences on this writer's Buddhist practice. For those of you that don't know this already, take a look at the link here: Ajahn Sumedho. Suffice to say, he has been a tremendous source of wisdom & practices for people the world over, let alone the central driving force behind the spread of Ajahn Chah's brand of Thai Forest Buddhism in the West. So, when the opportunity to meet him in person arises, it's something that's so precious & pregnant with possibilities. Which brings us to the hub of all this preamble.

On a recent visit to the International Forest Monastery here in Ubon Ratchathani, I was delighted to learn that Ajahn Sumedho was staying there. So, while most of the monks were eating their breakfast, I asked the fasting attendant monk to Ajahn Sumedho if I could talk with the latter. To my surprise, he said, "No." This was rationalized by explaining that laypeople were denied access to the aging Ajahn Sumedho, presumably because otherwise he'd be bothered all day by people with no deep interest in the Dharma just wanting a good photo opportunity. The feeling of deflation & disappointment was intense, but I smiled to the monk and told him, "Never mind." He was red in the face himself, which didn't go well with his ochre-coloured robes, but now I'm being facetious!

After this refusal, I took my usual walk through the forest. The trees & wind did their best to distract the mind from its despondency, and after sitting in the sala (pavilion) that stands in the middle of the forest, all negativity had floated away. After all, I'd met Ajahn Sumedho previously in England a couple of times, and as for the friendly monk (who shall remain anonymous here), he was merely following orders, no doubt. All he was guilty of was (over?) protection of a revered & elderly monk. The trees flapped as if to attempt to further calm me down, and the Buddha statue in the sala serenely gazed upon me, as he ever did. Awareness met the personification of itself, and all was well. Ajahn Sumedho had all but been forgotten! 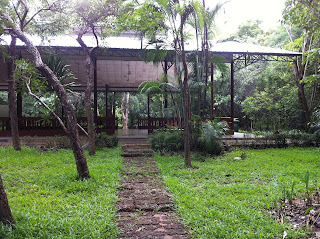 The sala (pavilion) in the International Forest Monastery

Then, two sets of monks' robes could be seen slowly drifting along the small track between the trees. One was the unmistakably large frame of Ajahn Sumedho, and the other turned out to be his attendant monk. As they moved past the sala, thoughts battled for supremacy: go over and say, "Hello"; no, don't disturb him. The latter was accompanied by a sense of duty, an obedience to rules, and thus proved the stronger impulse. I watched as the two men walked around the sala and away into the forest towards Ajahn Sumedho's quarters. Chance gone!

But, as Ajahn Sumedho slowly traversed the dirt path, crouching somewhat over his walking stick and intermittently coughing loudly, disappointment was replaced with compassion. He clearly wasn't that well, at least not on that morning, and to engage him in conversation when he probably just wanted to get back to his quarters and rest seemed somewhat selfish. Even without saying a word, or to my knowledge seeing me, he was teaching me! True enough, anyone old & sick could teach the same lessons, but it seemed to have more impact coming from someone of Ajahn Sumedho's Buddhist credentials. Just like the old man, the sick man, and the dying man that inspired the Buddha-to-be Siddhartha Gautama, here was Ajahn Sumedho naturally revealing the Dharma.

Alongside the above insights, after Ajahn Sumedho's disappearance into the foliage, another thing rose up in the mind: Now, there is no Ajahn Sumedho. Only the sala, the forest, and this body. There is the thought of him, but only this. On present evidence, he is an idea in the mind, nothing more. And, this, of course, is true of anything that is not presently here, or that the mind & senses are not aware of: it is all mind stuff, without actual physical substance. Writing this now (or in your case, reading it!), not only Ajahn Sumedho but also the forest & the sala are ideas, nothing more. Now, there is a computer, a room, these hands…and a bunch of thoughts. This is reality. In the Bahiya Sutta, the Buddha taught the following:

"In the seen, there is merely the seen; in the heard, there is merely the heard; in the sensed, there is merely the sensed; in the cognized, there is merely the cognized."
(Udana 1.10, Tipitika)
We humans have a tendency to make too much of things, don't we? Rather than just seeing what is seen, we must interpret it, judge it, like or dislike it. In our reactions, we screw it all up and create suffering (dukkha). If loud noise comes from outside, rather than merely hearing what is heard, we will tend to object to its presence. Ajahn Chah, Ajahn Sumedho's teacher, used to say that when this happens, it is really the mind disturbing the sound and not the other way round. Genius! Sound is just sound, hearing is just hearing, but it is the mind that likes or dislikes the experience, causing itself to suffer when the disliked is present and when the liked is absent. Incidentally, there's a wonderful little book called No Ajahn Chah that's worth reading. (Click on its name to download it.)

Further on in the above-quoted Bahiya Sutta, the Buddha reveals that to recognize that "In the seen, there is merely the seen" (etc.) is to realize that there's nobody here seeing (etc.). Only seeing, hearing, sensing, and cognizing. Then, there can be no suffering, for there's no one here to suffer! Actually seeing this, or hearing it, sensing it, or cognizing it, is what Buddhists call enlightenment. Unfortunately, not many Buddhists actually know what enlightenment really is. For them, it's something far off in the distance, to be experienced in some far-flung future life, if at all. This couldn't be further from the truth, as the Buddha's words reveal.

So, whether there is Ajahn Sumedho or no Ajahn Sumedho, there is the Dharma, naturally revealing itself to those 'with little dust in their eyes' (a saying from the Pali Canon). Similarly, even when such a teacher as Ajahn Sumedho is present but doesn't overtly teach, teaching is taking place…if we really wish to learn. (Of course, there is the possibility that Ajahn Sumedho was acting or exaggerating his ailments so as to teach me - but that seems rather far-fetched, even for a great teacher like him!) This isn't to say that this writer will now dispense with Ajahn Sumedho's teachings - they have their importance too! For one of his books, please click here: Intuitive Awareness.

Wishing for the liked to remain or for the disliked to go away is to give birth to suffering. Not to make too much of things and just see what is seen, hear what is heard, sense what is sensed, and cognize what is cognized, is to know true nature. And it is nothing like we might imagine it to be, for it is not a thought or feeling; it is the naked truth unadulterated with notions of teacher, teaching, enlightened, unenlightened, etc. Such ideas may arise, but then they are solely 'cognized' as they are, and not too much is made of them. Then, it doesn't matter whether we see Ajahn Sumedho or no Ajahn Sumedho. Either way, everything is okay.

A walking stick
Supports him
The old bhikkhu

Trackless
He is a memory
Windy trees
Posted by G at 12:00 AM

Do you observe the vedanā at the moment you were told "no," and again later as compassion arose upon seeing his condition?

Yes to the first one, and no to the second...and yes to the third (now). Good questions, Was Once.

This is exactly the same as what Byron Katie (who discovered "The Work") teaches: that all suffering is caused by believing our stressful thoughts. The entire world is a projection our stories that we assign to it. She likes to day, "Who would you be without your story?"

Thank u for this teaching. I am familiar with Ajahn Sumedho thru reading the book The Way It Is. Highly recommend this book.