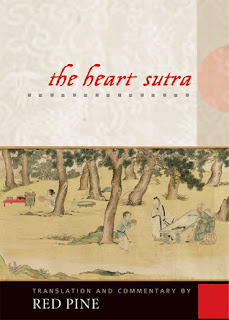 "The Heart Sutra is Buddhism in a nutshell. It covers more of the Buddha's teachings in a shorter span than any other scripture, and it does so without being superficial or commonplace."
(The Heart Sutra, p.5)

What a wonderful little book this is! With The Heart Sutra: The Womb of Buddhas, Red Pine has not only translated the pithy sutra itself with sensitivity and insight, but also includes extensive commentaries of several Chinese Zen masters, as well as supplying an evaluation of each section of the sutra himself. There is also an excellent glossary of terms at the end of the book…and all this in just ? pages! Moreover, the book is presented in a way that although mainly scholarly in tone, also directs the attention of the reader to examine their own true nature, which is the hallmark of a really brilliant Buddhist work.

The Heart Sutra is one of the most famous and beloved of Buddhist scriptures, summing up in just 35 lines the essence of Mahayana buddhist doctrine. It is also one of the most translated Buddhist sutras, with commentaries by such luminaries as Master Xuan Hua, Edward Conze, and the current Dalai Lama. The sutra's brevity is obviously part of its appeal, but the succinct manner in which it crystalizes Buddhist teachings must also be recognized as a reason for its enduring popularity:

Basically, the Heart Sutra is a brief account of emptiness (sunyata in Sanskrit), as understood in the Mahayana philosophy of prajnaparamita ('perfection of wisdom' or 'transcendent wisdom'). Put simply, all phenomena, whether mental or physical, are empty of any separate, eternal substance. Moreover, because all things are at heart empty, they are all expressions of that very same emptiness; Buddha-nature (this emptiness that is form) lies at the heart of all things, and if we realize this, we will be enlightened and free from the delusion of being a suffering self. Also, the sutra contains a mantra which it claims will enable its reciter to achieve awakening through its recital. This mantra is well known amongst Mahayana Buddhists, and goes, "Gate gate paragate parasamgate bodhi sate!" ('Gone, gone, gone beyond, gone utterly beyond - hail awakening!')

Red Pine's translation of The Heart Sutra is a worthy addition to those mentioned above; indeed, in this reviewer's opinion, it is the definite version to possess. This is quite a claim, but hopefully the reader will see why such a statement is no mere hyperbole, but is based upon a careful reflection of Red Pine's work. For, not only is there a clear translation and explanation of the sutra itself, going down to the mintiest detail giving different translations for many words and phrases in the sutra, but there are many, many reflections by Chinese Zen masters giving their understandings of the text, also, including Fa-tsang (643-712), Chih-shen(609-702), Chen-k'o (1543-1603), Ching-chueh(683-750), Hui-ching (578-650), Hui-chung (d.775), and Yin-shun(1906-present). Here are the wise words of Pao-t'ung (732-824) regarding the famous "form is emptiness, emptiness is form" declaration in the sutra:

In the Introduction, which runs to 24 pages in length, Red Pine describes the history of the Heart Sutra, its mysterious origins and the various translations of it into Chinese by successive commentators. He also explores the various controversies regarding the text itself, and explains some minor points of contention that have vexed Buddhist scholars and philosophers for centuries. There's even a neat little map showing the possible places that could have been the womb of the Heart Sutra, as such. But, as Red Pine points out throughout the book, the origins of the sutra aren't what's really important, but its meaning and its implications. And this aspect of the Heart Sutra is explored with equal zest.

The main body of the book is divided in to four parts that Red Pine believed best reflects the structure of the text itself; and his arguments for this division are convincing. He sees the sutra as a reaction to the teachings of another school of Buddhism that no longer exists, but which was spread across Asia when it was composed. This sect is known as Sarvastivada Buddhism, and Red Pine argues that the Heart Sutra was created to combat what was seen as errors in its interpretation of Buddhist teachings, based on knowledge rather than wisdom.

"My guess is that the use of heart in the title [of the sutra] was in response to the series of Sarvastivadin texts that began with Dharmashri's groundbreaking Abhidharma Hridaya Shastra (Treatise on the Heart of the Abhidharma), composed in Bactria (Afghanistan) around 100 B.C. This was followed by a text of the same title (and much the same material) written bu Upashanta around A.D. 280 and another by Dharmatrata around A.D. 320 entitled Samyukt Abhidharma Hriddaya Shastra (Commentary on the Heart of the Abhidharma Shastra)."
(Ibid. p.36)

The protagonists in the sutra are Avalokiteshvara and Shariputra. The former is a Mahayana bodhisattva representative of compassion, the latter an arhat from the earliest scriptures that personified Buddhist ideals of wisdom, including for the Sarvastivadins. Avalokitesvara evaluates the Sarvastivadin philosophy in light of the Mahayana understanding of prajnaparamita, revealing that all things, including the Buddhist teachings themselves, are empty. As Red Pine presents it, this was a radical reinterpretation of basic Buddhist ideas, but this was not to revise what the Buddha had apparently taught, but to understanding it better, with wisdom rather than the intellect.

The four parts of the book are entitled Prajnaparamita, Abhidharma, The Bodhisattva Path and The Womb of Buddhas. This division forms a progression from a description of prajnaparamita, a critique of Sarvastivadin philosophy, a description of the bodhisattva path, and ending with a presentation of the sutra's mantra. In a step-by-step approach, Red Pine scrutinizes each line, squeezing out much meaning than would meet the eye at first. This he is able to do through years of study of the Chinese land Sanskrit languages, as well as having lived in China for many years, and having practiced with Buddhist masters from the Chinese tradition. He has produced published accounts of his travels in China and meetings with sages under his real name of Bill Porter. Here's a snippet of his eye for detail:

"As for the word nirvana, there are several explanations of its origin. The usual derivation is to interpret it as a combination of nir (a negative prefix) and either va, meaning 'blow', or van, meaning 'desire.' Thus, nirvana means 'the cessation of breath' or 'the cessation of desire.' Sanskrit etymologies, however, have dug much deeper and have extracted such diverse meanings from van as the 'path' of transmigration, the 'stench' of defilement,the 'forest' of the skandhas, and the 'thread' of karma…Another common derivation was to understand nirvana as a combination of the negative prefix nir and the root vri, 'to cover,' 'to restrain,' or 'to obstruct.'"
(Ibid. p.138)

If all the above is not enough reason to own a copy of Red Pine's The Heart Sutra, the following will surely convince the 'serious' Buddhist to want to buy the book - and owning it is important, for simply borrowing it and reading it once will not benefit the reader as would many readings and reflections over many years. So, what is this convincing reason to own this book? It will enlighten you! Not only in the sense of being enlightened about the Buddhist understanding of emptiness, but also in actually experiencing it! Now, Red Pine himself may or may not have experienced the awakening he describes so well in this book, but his words - and those of the Heart Sutra itself - can certainly assist their reader in doing so. If you have doubts concerning this view, please buy the book and spend a few months with it - it can assist you to see your true nature…for sure!

Here are the details of the book:

Related posts:
Review: The Lankavatara Sutra, by Red Pine
E-book Review: The Heart Sutra, by Master Hua
Posted by G at 12:00 AM

Red Pine came to Syracuse and gave a nice talk and reading of the Heart Sutra. I should say I have knownn this sutra for at least 45 years and only recently had some insight into it. I Am empty aware space and I Am form, body and personality appearing and there are no two terms to relate.

Is there a recording? I quite enjoy his chanting/ poetry technique.

When there is nothing between you and everything else.