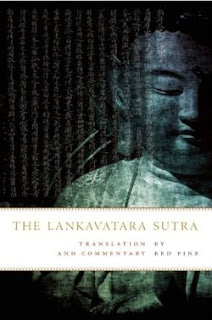 This is both a brilliant and difficult work. Red Pine has translated into modern English a very important sutra, one that is central to the history of Zen Buddhism, but is also renowned as being difficult to fathom for even the most seasoned Buddhist. And this, this reviewer would argue, is reason enough to feel thankful for Red Pine's efforts, for he has made available to our eyes and minds a deep work of Buddhist teaching that can enrich our Dharma practice no end, if we are willing to spend some quality time with it. Moreover, he has supplied copious notes inspired by the original Chinese and Sanskrit versions of the text, as well as by Chinese commentators.

The book begins, thankfully, with an excellent introduction that sets forth the two basic ideas contained in the Lankavatara Sutra, that 1) the universe is produced by mind, and 2) that we should each experience this. The first can be said to be a teaching of the Yogacara school of Buddhism, whilst the second is the foundation of Zen. And, illustrating its importance in the latter sect, Red Pine tells us that it was this sutra that the first patriarch of Zen Buddhism, Bodhidharma, handed over to his successor, along with his bowl and robe.

The main text of the book is the actual translation itself, accompanied with boxes of well researched notes, colored grey to distinguish them from the words of the sutra. An example of both appears below. A substantial Chinese-Sanskrit-English glossary follows the sutra, crammed with useful definitions and explanations of central terms used in the main body of the book. There's also several blank pages after this, presumably for the reader to supply their own notes as well - unless its Red Pine's own Zen-like wordless & humorous commentary after all the technical jargon!

As to the contents of the Lankavatara Sutra itself, the work is primarily a set of philosophical questions put forth by the bodhisattva Mahamati to the Buddha who essentially instructs the former that it is "By becoming aware that projections are nothing but mind" that we realize enlightenment (The Lankavarara Sutra, p.4). Of course, there's much more the sutra than this, and Red Pine skillfully presents the deeper and more complicated threads it in a way that helps us to grasp, intellectually at least, their meanings. To fully understand this incredible text involves we need to abandon rationality and dive into emptiness, and that is the second of the book's important messages. It's up to each of us to use the sutra to help us achieve this. In the meantime, here's a sample of Red Pine's translation skills and the notes that he supplies as well:

LIX
Mahamati once more asked the Buddha, "Bhagavan, please tell us about a buddha's awareness. Bhagavan, what constitutes a buddha's awareness?"
The Buddha told Mahamati, "It consists in realizing that there is no self in beings or things, in understanding the two obstructions, in transcending the two kinds of death, and in putting an end to the two kinds of affliction. This is what is meant by the awareness of a buddha. Those shravakas and pratyeka-buddhas capable of this are also called buddhas. This is the reason I teach one path."
The Buddha then repeated the meaning of this in verse form:
1. "Knowing the two kinds of no-self / ending the two obstructions and afflictions / transcending forever the two kinds of death / such is the awareness of buddhas."
[Red Pine's notes]
17. Section LIX. Implicit in this definition of buddhahood is a reinterpretation of the Four Noble Truths: how can there be suffering if there is no self; how can there be a cause of suffering if there is no obstruction; how can there be a cessation of suffering if there is no death; and how can there be a path leading to the cessation of suffering if there is no affliction.
18. The two obstructions are passion and knowledge. Passion is the cause of karmic death. Death is the cause of transformation death.
19. The two kinds of death are karmic death and transformation death, the latter of which is so subtle that it is barely noticed.
20. The two afflictions are the senses and what the senses give rise to. It is on the basis of these that attachment to the two kinds of self exist and that the two kinds of obstructions appear and that the two kinds of death occur.
21. In section LVI, the Buddha says this about the one path: "By the one path I mean the path to realization. And what does the one path to realization mean? Projections of subject or object do not arise in suchness. This is what the one path to realization means." Realization changes everything. It changes who or what we are. Thus, shravakas and pratyeka-buddhas also travel the one path because there are no shravakas or pratyeka-buddhas.
(The Lankavatara Sutra, pp.170, 171, & 173)

Hopefully, the above excerpt clearly shows both the importance of The Lankavatara Sutra as a Zen Buddhist text, and the wonderful job Red Pine has done in his English version. The notes are typical of those that run throughout the book on roughly every other page, some of them taking up more than a page each. This work comes with a wholehearted recommendation from this reviewer, for both seasoned Zennists and those wishing to go to an early text in the tradition as a starting point. Either way, it is a book to return to again and again for inspiration, and Red Pine deserves our thanks and blessings for this.

The above book is published by Counterpoint Press, and is available from their website at:
The Lankavatara Sutra
Posted by G at 12:00 AM

The "mind-only" is not the teaching of the Yogacara school, consciousness-only is what the Yogacara teaches. Mind-only is the teaching of the One Vehicle (Ekayana) school that is found in the One Vehicle sutras of the Lankavatara, Lotus, Avatamsaka (Flower Garland), and Great Dharma Drum Sutras and especially the Sutra of Queen Srimala's Lion's Roar. The Srimala Sutra is the only sutra specifically named in the Lankavatara. The Lankavatara is a One Vehicle sutra that synthesizes the 3 teachings of Yogacara's teaching of consciousness-only, Madhyamaka's teaching of Emptiness (Sunyata), and the Buddha Nature teaching of Tathagata-garbha by the unified teaching of mind-only. In one period Zen was called the "mind-only school" because of this synthetic approach that all phenomena, all dharmas, all things, are nothing but discriminations or projections of mind.

Thank you for sharing your nice review. I hope many will be motivated to study and practice this wonderful teaching.

Luca,
Thank you for your comments. Yes, if Red Pine's wonderful work encourages people to take up the practice of Buddhism, it is a tremendous thing. If, by promoting his work, there is some merit for myself, I dedicate it to all the suffering beings in the multiverse & beyond!

"In one period Zen was called the "mind-only school" because of this synthetic approach that all phenomena, all dharmas, all things, are nothing but discriminations or projections of mind." - This can also be a basic description of Yogacara Buddhist philosophy, which, of course, has had immense influence on Zen Buddhism. Indeed, Mind-Only & Consciousness-Only are both terms used for Yogacara, being translations of the other main names given to the school, which are Vijñapti-mātra (Consciousmess-Only) & Cittamātra (Mind-Only.)