Review: The Poetry of Zen, by Sam Hamill & J.P. Seaton 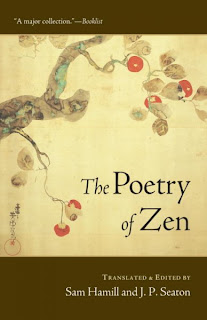 Want a small, concise yet decent collection of Zen poetry? Then this is what you're looking for. The translator & editors of The Poetry of Zen, Sam Hamill & J.P. Seaton, have produced a work worthy of any bookshelf (or pocket). In it, they have translated poems by Lao Tzu, Han Shan, Li Po, Tu Fu, Saigyo, Dogen, Basho, and Issa, not to mention many, many other greats of oriental verse. Here's an example of Hamill's efforts in rendering the original Chinese of Lao Tzu into English:

"Heaven is eternal. The earth endures.

The reason for heaven's eternity and eat=rth's endurance
is that they do not live for themselves only,
and therefore may live forever.

The sage steps back but remains in front,
the outsider always within.

Self is realized through selflessness."
(The Poetry of Zen, p.23)

The book is divided into two parts covering Chinese poems and Japanese poems respectively. The poets themselves were not all of the Zen school of Buddhism (Saigyo was a member of the Shingon sect and Issa was a Pure land Buddhist, for example), and some not even Buddhists  (Tu Fu was a Confucian, and Lao Tzu the founder of Daoism). But, this does b=not mean that the spirit of Zen is not to be found in their poetry, and as they argue in the introduction, "Zen is Taoist Buddhism. Or: Zen is Buddhist Taoism." (Ibid. p.11) This broad approach to their subject matter has enabled Seaton & Hamill to include much wonderful poetry in this current volume which otherwise would have been omitted merely because it didn't come from the Zen school itself. The reader should be grateful for this decision, as the verse by Lao Tzu above illustrates, as does the one below by the lesser know poet Liu Ch'ang Ch'ing (710-785?), translated by J.P. Seaton:

"Searching for the Taoist Monk Ch'ang at South Creek

The way is crossed by many paths,
the moss by sandal tracks.
White clouds lean, at rest on the silent island.
Fragrant grasses bar the idle gate.

Rain past, observe the color of the pines.
Out along the mountain, to the source,
flowers in the stream reveal Ch'an's meaning:
face-to-face, all words gone."
(Ibid. p.49)

So, in the first section of The Poetry of Zen, the poets are Chinese, and cover a timespan from Lao Tzu (4th century BCE) to Po Ching (1884-1918). Obviously, in all that time there have way more poets writing on Zen themes than could be included in a small book like this one, but the authors have done an excellent job in sifting through this great tradition and coming up with gems from recognized poetical giants as well as less well known figures. These include Buddhist monks (Hui Yung, 4th to 5th centuries), Confucianists (Tu Fu, 712-770), and  less easily classified poets such as the "Zen tramp" Han Shan (8th century). The following is a poem of the latter's, translated by Seaton:

"Idly, I wander to the flowering peak.
Morning sun: its glory blazing
All around, in sunlit emptiness
White clouds, and cranes, fly."
(Ibid. p.34)

In the second part of the book we are introduced to the Zen poetry of Japan. This, again, covers a long period of time, 8th century (the Priest Mansei) to the 19th century (Kobayashi Issa). In its introduction, this section of the book leads the reader through the history of Zen and its poetical expression in Japanese history in a concise and interesting manner. It uses the work of Matsuo Basho (1644-1694), the most famous of Zen poets and promoter of what became known as the haiku, to show how Japanese Zen & poetry differ from their Chinese origins. Basho is given center stage among the Japanese poets with a full twenty pages of the book, including prose as well as the poetry which it often accompanied in his work:

"It was mid-Autumn under threatening skies when I made up my mind to begin a journey. Windblown leaves reminded me of all the uncertainties a wanderer faces.

The Poetry of Zen is  a tremendous book that is quite likely to be the definite work of its size and scope. The two translator / editors deserve all the credit going for presenting such a rich & inspiring collection of poetry to the world. And, you don't have to be a Buddhist, or even a Zennist, to appreciate the poems in The Poetry of Zen. For, as the six excerpts in this review illustrate, Zen poetry can be beautiful, even sublime. The poets that composed these verses may or may not have been enlightened - and it seems that most were certainly not - but their poetry is most enlightening to say the least…and most worthy of our attention. Let's finish with two typically delicate pieces, the first translated from the Japanese, the second from the Chinese:
Soin (1604-1682) translated by Sam Hamill:

"Settling, white dew
does not discriminate,
each drop its home"
(Ibid. p.132)

"Sitting at night by the west window,
rain everywhere.
Before my eyes the rule of nature's bitter,
hard to fathom.
The lamp's gentle gleam becomes a pyre:
from all about, moths come,
flight upon flight,
into the fire."
(Ibid. 79)

The above book is published by Shambhala Publications, and can be viewed here: The Poetry of Zen
Posted by G at 12:00 AM

Yes on both counts here, Anthony!