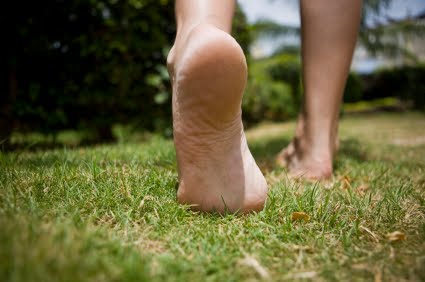 Walking meditation is not so very well known in the West, but is a common practice in the traditional forms of Buddhism found in Asia, and is known as kinhin in Japanese and cankama in Pali. In the forest tradition of Northeast Thailand many well-known monks, such as the renowned meditation master Ajahn Mun, have used the latter method to cultivate enlightening mind states. In Wat Pah Nanachat (the International Forest Monastery) in Ubon Ratchathani, walking meditation is used by many of the contemplatives, and is been promoted by its former abbot Ajahn Nyanadhammo in the excellent pamphlet ‘Walking Meditation’ downloadable here. Here’s an instructive extract from this short work:
“In this method, while walking place all your attention at the soles of the feet, on the sensations and feelings as they arise and pass away (this is assuming that you are walking bare footed, as most monks do. Although light soled shoes can be worn if necessary.) As you begin walking, the feeling will change. As the foot is lifted and comes down again into contact with the path, a new feeling arises. Be aware of that sensation, as it is felt through the sole of the foot. Again as the foot lifts, mentally note the new feeling as it arises. When you lift each foot and place it down, know the sensations felt. At each new step, certain new feelings are experienced and old feelings cease. These should be known with mindfulness. With each step there is a new feeling experienced – feeling arising, feeling passing away; feeling arising, feeling passing away.”
Walking meditation is a useful alternative (or complementary) technique with regards to sitting meditation, the classical physical position for Buddhist meditative practice. In ‘Walking Meditation,’ Ajahn Nyanadhammo states that many monks and nuns have realized insight and enlightenment whilst practicing walking meditation. He also says that in the Forest Monastic Tradition every part of life is an opportunity to meditate, not only when doing sitting meditation. So, cankama can be used as an integrated aspect of Buddhist practice, allowing the various processes of life to be investigated and understood as impermanent, imperfect, and impersonal.

I personally find walking meditation effective for establishing mindfulness in the mornings, and in his book ‘Mindfulness, Bliss and Beyond,’ Ajahn Brahm states that Buddha himself used cankama early in the mornings (a lot earlier in the mornings than me!). He also tells a story from his own life that illustrates the potential power of walking meditation. Early in his monastic training, Ajahn Brahm was doing cankama and was so absorbed in this practice that he lost track of time and missed the beginning of an important ceremony. Another monk came to fetch him, but had great difficulty arousing the young monk from the deep state of concentration (samadhi) that he had developed, so much so that he took quite some time to come out of the feeling of beauty and peace that had arisen during his walking. Ajahn Brahm states the following in the same book:

“As your mindfulness increases, you will know more and more of the sensations of walking. Then you find that walking does have this sense of beauty and peace to it. Every step becomes a “beautiful step.” And it can very easily absorb all your attention as you become fascinated by just walking. You can receive a great deal of Samadhi through walking meditation in this way. That Samadhi is experienced as peacefulness, a sense of stillness, a sense of the mind being very comfortable and very happy in its own corner.”

There are many variations of walking meditation, but one simple method to begin with is the following:

Using walking meditation this way, we can lay the foundations of a steady and alert mind which can be of benefit away from the meditation path. A sense of beauty and peace may arise that accompanies every step that we take, making the simple experience of walking a deeply pleasurable one. We may find that there is an increase in the general alertness of our actions as well as with regards the feeling of walking itself. Then, wherever we are, we will be walking with Buddha’s feet of wisdom.

The above post is a revised version of a post that first appeared on this blog in September 2009. A review of Ajahn Brahm’s great book ‘Mindfulness, Bliss and Beyond’ can be read here.
Posted by G at 8:07 AM

Thanks sharing. Walking meditation not only help us be mindful all day while also increase our wisdom. Recently, I met a guru who practice for over 30years, he is Venerable Vimokkha and did share his teaching in MP3 files in my blog. Feel free download this free meditation teaching in MP3 at:
http://www.kidbuxblog.com/ajahn-wimoak

Thanks for the comment, link & free mp3s, Kidbux. Dharma is, after all, the greatest of all gifts.

Good articles G.
I have never heard of walking meditation could help you in understanding the feelings.
Thanks.
Hope to see new articles from you.

Yes, cankama is a very physical form of meditation, or mindfulness, and can assist us to be awake to the body, being open to its sensations and movements. Thank you for the comment.

I often do walking meditation and it is really helpful for each and everyone. I would suggest that you also try this.