Review: Mindfulness, Bliss, and Beyond, by Ajahn Brahm 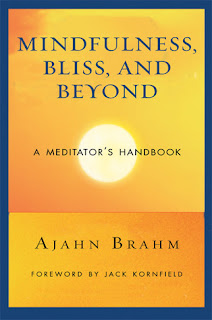 This book is the kind of work that comes around once in a lifetime: it’s a book that can change lives. There are a plethora of books available these days on Buddhist meditation, written by this expert who studied with that master, or that master that adapted this practice for the modern world, etc. Ajahn Brahm’s work is somewhat different to the usual material found in the Buddhist marketplace: what we have here is a book not only based on the teachings of the Buddha as found in the earliest scriptures available, but also a modern teacher’s experiential account of how these methods work. In the introduction, he catches our attention perfectly by stating that meditation is the way of letting go. He says that in meditation the point is to let go of the complex outer world and reach the powerful bliss that lies within. Ajahn Brahm declares that in his experience, this bliss is better than sex!

The book is split into two sections, Part 1 which introduces meditation to those who are less experienced with it, and Part 2 which goes into much more depth on the subject…and I mean much more depth! To begin with, we’ll take a look at Part 1, however, which starts with two chapters dealing with what the forest monk calls “The Basic Method of Meditation.” Here, Ajahn Brahm details seven stages which lead from the simple beginnings of being alert to this moment, all the way up to what Buddhism calls jhana, the pinnacle of Buddhist meditation and the prelude to enlightenment itself. On the way to enlightenment, we encounter the five hindrances which Ajahn Brahm explains thoroughly, showing how they are to be let go of during meditation practice stage by stage. This first part of the book includes useful instructions such as how to set up and use ‘a gatekeeper’ to keep out unwanted distractions, and various meditation techniques such as anapanasati (mindfulness of breathing), metta bhavana (the cultivation of loving-kindness), and cankama (walking meditation). The emphasis is on breathing meditation and what the forest monk refers to as ‘the beautiful breath’, but the different methods are described in enough detail for someone inexperienced in them to be able to practice them.

The role of mindfulness is covered in Part 1, also, revealing how experiencing the jhanas (meditative absorptions) is an important precursor to the four foundations of mindfulness (cattari satipatthana) that are the way to see the Dhamma (more commonly known as the Dharma). This Dhamma is the way things are, and to fully comprehend it is to experience nibbana (also called nirvana). Ajahn Brahm states that the purpose of the satipatthana is to see anatta, the fact that there’s no self; that the body, feelings, mind, and mind objects are not self.

In Part 2, Ajahn Brahm goes into much more precise explanations with regards the jhanas, devoting three chapters to how they are developed and relate to one another. His knowledge of these extremely important (and often misunderstood) states is truly impressive, based on his own experience. Following on from the jhanas, he then relates the nature of ‘deep insight’ (samma-nana), and shows how it reveals the true nature of existence, and that which lies behind it all: nirodha (the ending of greed, hatred, and delusion).

The final two chapters describe enlightenment in much detail, and pull no punches when mentioning the inaccurate definitions of nibbana (also often misunderstood); he differentiates enlightenment from ‘psychic states’ of mind, for instance. He also writes that the meaning of nibbana is changed to be more appealing whenever Buddhism becomes popular. Teachings are well received when they coincide with what people want to hear, so some Buddhist teachers bend the truth to suit their followers, thus not contradicting their own unenlightened state. All this leads to ‘a dumbing down’ of nibbana.

Mindfulness, Bliss, and Beyond is a book written with much learning, experience, and humor. It is a work that I value greatly, and am still trying to come to terms with, for after over twenty years of meditation practice, this recently published work has much to teach me. I cannot recommend it more highly than that, and encourage anyone with a serious interest in the meditative disciplines taught by the Buddha to buy this book – now!


Ajahn Brahm has written a follow up to the above book, a review of which can be read here: Review: The Art of Disappearing.