Review: The Mind and the Way, by Ajahn Sumedho 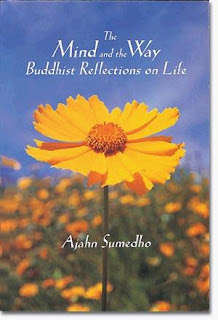 In The Mind and the Way, Ajahn Sumedho introduces his reader to the basic teachings of Buddhism in the light of mindfulness. Each chapter is centered around teachings familiar to any Theravada Buddhist, but beautifully scented with the practice of awareness, and illustrated with examples from Ajahn Sumedho's own life. It is worth noting here that Ajahn Sumedho did not write this book - he spoke it, for it has been edited from spontaneous talks given by him prior to its original publication n 1995. Not that this detracts from the quality of the teachings at all, for they contain an organic flow that is typical of an accomplished speaker such as the ajahn.

The first part of the book is entitled Approaching the Way, and in Ajahn Sumedho addresses such subjects as Is Buddhism a Religion?, The Four Noble Truths, The Three Refuges, and Nibbana (Nirvana). These are obvious topics to cover in a primer on Buddhism, but Ajahn Sumedho's contemplative attitude to them infuses the teachings with a practical wisdom that is so often missing from more abstract works on Buddhist teachings. He emphasizes that these teachings are not dogmas to become attached to, but rather insights to reflect upon, to experience. Of Buddhism, he states:

"It's not based on a metaphysical or doctrinal position, but on an experience common to all humanity - the experience of suffering. The Buddhist premise is that by reflecting, by contemplating, and understanding that common human experience, we can transcend all the mental delusions that create human suffering."
(The Mind and the Way, p.3)

Suffering, as the first of the four noble truths, is of central importance in Buddhist understanding of the way things are. To know suffering (dukkha) experientially is what's crucial, according to the ajahn. And, in doing so, we take the initial step towards nirvana, for suffering is the motivation to seek enlightenment in the first place. All of us, he suggests, can recognize suffering in our lives - in one form or another -  and this is the beginning of walking the way.

"First, dukkha has to be realized, made real in our mind; in other words, it has to be made a fully conscious experience. You're in this very limited condition, an earthbound body. A body is subject to pain, to pleasure, to heat, and cold; it gets old and the senses fade; it has illnesses, and then it dies. And we all know this, that death s waiting there for us all. Death is here. It's something people don't like to consciously reflect on or recognize - but it's something that can happen at any moment."
(Ibid. p.18)

Suffering and death are not to be hidden form view, then, but rather focused on in a mindful manner. Ajahn Sumedho believes that this is ultimately a positive movement, for in doing so, we will move towards an understanding of suffering's cause, and the way to end it. The latter is the fourth noble truth of the path, or way to enlightenment, which will not be enunciated here (go buy the book!), but rather, we will turn attention to the second part of the book called Awakening the Mind. Here, the focus is on meditation & mindfulness, and includes the following chapters: Mindfulness of the Breath, Cleansing the Mind, and Themes for Daily Practice. Mindfulness of the breath is a traditional Buddhist meditation, but Ajahn Sumedho is also an innovator in these matters, as with his teachings on Noticing Space:

"Our minds tend to get caught up with thoughts of attraction or aversion to objects, but the space around this thoughts is not attractive or repulsive. The space around an attractive thought and a repulsive thought is not different, is it? Concentrating on the space between thoughts, we become less caught up in our preferences concerning the thoughts. So if you find that an obsessive thought of guilt, self-pity, or passion keeps coming up, then work with it in this way - deliberately think it, really bring it up as a conscious state, and notice the space around it."
(Ibid. p.119)

The above practice is what we might deem 'Buddha Space,' and it was such exercises that originally inspired the name of this blog. Furthermore, it is this reviewer's own testimony that such practices can help us to become less egotistical and self-obsessed. In propagating such teachings, Ajahn Sumedho has done the world a great service, and he has the gratitude of many, many people, including yours truly.

The final part of the book is named Living the Dhamma. It focuses on the implications of Buddhist practice at both the individual & societal levels, and features chapters such as The Science of Goodness, The Human Family, Education for Life, and A Perfect Society. Here, Ajahn Sumedho discusses the subject of freedom, contrasting what he calls the freedom based on desire with freedom in the Dhamma (often rendered 'Dharma'). This is a freedom that comes from mindfulness rather than blind desire, and is based on the teachings of Buddhism. As to the word Dhamma, Ajahnn Sumedho has an interesting definition which comes from his own innovative approach to teaching:

"[So] 'Dhamma' is an all-inclusive term. It means 'the way things are, without any kind of bias.' It means 'the natural law.' When we contemplate Dhamma, we are not coming from an idea of Dhamma as being something. If we define 'Dhamma' as being this or that, then we start looking for something, don't we? So that is not the way. The way of mindfulness is the opening of the mind to the way it is - to this time and place."
(Ibid. p.149)

So, in conclusion, The Mind and the Way is an important Buddhist book. It not only communicates the basic teachings of Buddhism, but does so in a way that promotes their active understanding by the reader. Moreover, Ajahn Sumedho supplies his reader with the techniques required to do so, as with the instructions regarding noticing space above. This collection of Buddhist teachings cannot come more highly praised by this reviewer - make the next book on Buddhism you buy this one. You will benefit in many ways, depending how much you apply its contents to your own life.

Another book by Ajahn Sumedho has been reviewed on this blog; to read it click here: The Sound of Silence.
Posted by G at 12:00 AM