Review: The Sound of Silence, by Ajahn Sumedho 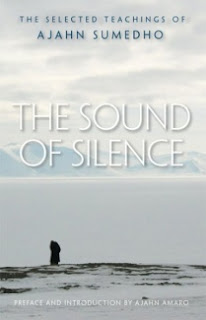 Ajahn Sumedho's The Sound of Silence is a joy to read, full of the insight and humor that this popular Buddhist monk is famous for. It was a genuine privilege to receive his wisdom as I worked through its pages, savoring the words of its author as he discusses Buddhist meditation and mindfulness. This wisdom has been accrued over a long monastic career of over 30 years, first as a young monk in Thailand, under the meditation master Ajahn Chah, before moving to the West to be the abbot of Cittaviveka and then Amaravati Buddhist monasteries. Since this book was published, the venerable ajahn has retired in Thailand, living out his life as a simple Buddhist monk. He recognized around the globe as a compassionate & wise Buddhist teacher.

The twenty-seven chapters cover subjects from body contemplation to 'the sound of silence,' and from the nature of consciousness to awareness of rebirth. They were transcribed from spontaneous talks given by Ajahn Sumedho over a six year period, and retain much of the vigor and liveliness he is renowned for. Throughout, he never strays far from the central theme of this work – mindfulness, or as he often describes it, intuitive awareness. Much of Ajahn Sumedho’s words revolve around making this clear consciousness the hub of one’s practice, remaining awake to the various thoughts, feelings, moods, and sensations that fill the mind’s attention. In doing so, the self-view (sakkaya-ditthi) dominates one’s perspective less, opening one up to the experience of life as it truly is: impermanent (anicca), unsatisfactory (dukkha), and not self (anatta).

There are many personal details from Ajahn Sumedho’s monastic career as well that add another dimension to The Sound of Silence, revealing his close relationship to his mentor Ajahn Chah, his analysis of his own personality traits, and his contemplative life as lived in both Thailand and England. In an example of this, we read of the poignant and amusing incident involving a bag of sugar and a fasting Venerable Sumedho – engineered by the ever-insightful Ajahn Chah!

A really important aspect of this book is that it’s not a scholarly work revolving around complicated Buddhist philosophy and psychology (although Ajahn Sumedho does display admiral knowledge of Buddhist doctrine). Instead, the forest monk focuses on the meditative life as lived by real people with real problems and concerns, as reflected in the title of one of the transcribed talks: When You’re an Emotional Wreck. Indeed, dealing with everyday concerns with mindfulness is a central theme of this book, encouraging its readers to apply its teachings to their own lives.

The Sound of Silence is a true gem among the plethora of books on Buddhism that are available nowadays. It’s a work I will certainly return to again and again over the coming years as an aid to my own meditation practice, alongside Ajahn Sumedho's other major books Teachings of a Buddhist Monk, The Mind and the Way, and the wonderfully-titled Don't Take Your Life Personally. For, with this modest monk's words, we posses pointers to the gate to the deathless, and as we all head to our final breaths I can't think of a better companion. I can’t recommend this book highly enough.

This is really interesting and knowledgeable. Thanks for sharing. I really appreciate it a lot. Please do more blogs in the future. Thank you and God bless to the blogger!