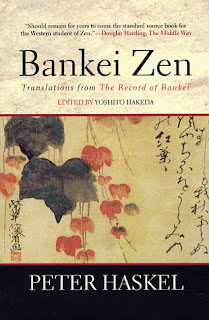 Bankei Yotaku (1622-1693) was a great Zen master. He was also original and somewhat iconoclastic in his approach to the teaching of Zen. Perhaps this latter trait has denied him the fame and acclaim that other Zen masters have received both in the east and the west. Or perhaps it's in the very essence of his teaching of the Unborn Buddha Mind that his directness is uncomfortable for more conventional Zen enthusiasts. Bankei deserves or attention as much as any other of the better-known Zen masters, and in this book Peter Haskel presents us with the means to do so.

Bankei Zen contains a superb mixture of translations from the original Japanese, containing sermons, poems and letters by the 17th century master. Haskel also includes an illuminating introduction which describes Bankei's unique path to awakening and subsequent career as an incredibly popular teacher of Zen. We learn of his rebellious nature when he rejected established ideas about the 'Bright Virtue,' a concept he learned with a Confucian teacher, and instead sought to experience it for himself. The accounts of Bankei's struggles with various hardships and illnesses in pursuit of truth are among the most inspirational this reader has read regarding the correct attitude towards attaining enlightenment. And the occasion when he realized it is…bizarre!

Haskel explores the above-mentioned 'Unborn Buddha Mind,' a concept found in other Buddhist teachings, but presented by Bankei in a way that many of his contemporaries found accessible and appealing. Rather devoting ourselves to complex rituals and philosophical studies, Bankei encourages us to "Abide in the Unborn!" This is done by letting things be as they are, and allowing our self-centeredness and attachments to drop away. He used simple, everyday language to convey the Unborn to his listeners, which Haskel has translated well into modern English. The following extracts from Bankei Zen should illustrate the above points succinctly.

"With the dynamic function of the marvelously illuminating Buddha Mind, every object that comes before your eyes is individually recognized and distinguished without your doing a thing. So, even though you're not trying to do so, you recognize thousands of different impressions by sight or sound. All these are things with form - the things in people's hearts that can't be seen - are precisely reflected. Even with the different sorts of faces you encounter, their good or evil thoughts are reflected by the marvelously illuminating Buddha Mind."
(Bankei Zen, p.79)

"I can tell you something about this matter of women's Buddha Mind. I understand that women feel very distressed hearing it said that they can't become buddhas. But it simply isn't so! How is there any difference between men and women? Men are the Buddha Body and women are the Buddha Body too. You shouldn't entertain any doubts of this sort. When you thoroughly grasp the Unborn, then, in the Unborn, there's no difference whether you're a man or a woman. Everyone is the Buddha Body."
(Ibid. p.35)

"Don't hate the arising of thoughts or stop the thoughts that do arise; simply realize that our original mind, right from the start, is beyond thought, so that, no matter what, you never get involved with thoughts. Illuminate original mind, and no other understanding is necessary."
(Ibid. p.136)

The above quotations are just a taster of the Buddhist wisdom found in the pages of Bankei Zen, by Peter Haskel. The book is chock-a-block full of interesting and inspiring teachings that we can all benefit from reflecting on. As a document to Bankei's life & teachings, it is beautifully put together, full of scholarly notes for the more erudite reader and is illustrated with photographs pertaining to Zen master Bankei. If there's one book on Zen Buddhism you buy yourself (or someone else) this year, make it this one - you can't be disappointed. After all, you are the marvelously illuminating Unborn Buddha Mind!

The the publisher's page of the book at Grove Press, click here: Bankei Zen
Posted by G at 12:00 AM