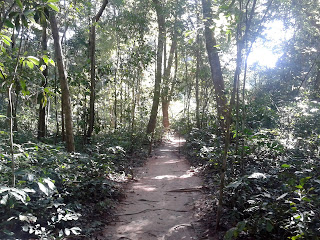 Walking the forest path in Wat Pa Nanachat ('International Forest Monastery') always reveals something new, something fresh. In fact, each moment is new & fresh, as long as the mind remains alert in the present, open to its environs. And what environs! Trees form a dramatic canopy that protects against the tropical heat (to a degree or two, at least!), and the path itself winds in-between them, leading these feet always to somewhere interesting. 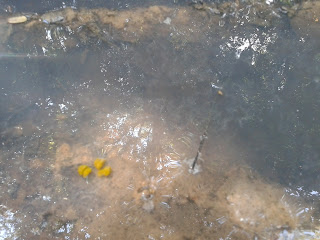 Full of life, the forest is never still for a second, although it sometimes seems that way if we're not so alert. Even when its contents visually merge into one, green blending to black, there are sounds that infiltrate the stillness. Birds, insects, and other, less easily identifiable creatures call for attention, and the trees themselves rustle with the massaging of the wind. The creaking of giant bamboo is a sound frequently heard in the forest, a sound unfamiliar to these western ears that takes a few seconds to identify. 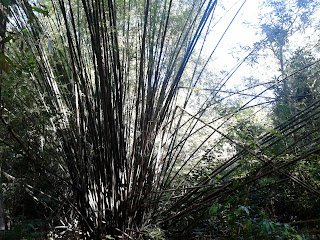 But even the enormous bamboo plants that prod upwards are not invincible. Along the forest path there are several arches, formed from fallen bamboo, almost as if a giant ogre has been at work forming gateways amongst the trees. They are extremely impressive, demanding attention and not a little wonder at nature's ways. But to stop too long is to invite the close attentions of the mosquitoes that hunt in this environment. So, feet march on to new sights and sounds. 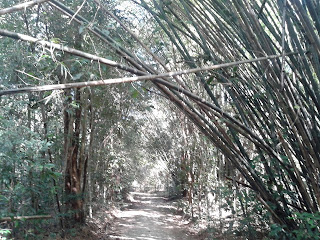 It isn't only small objects that catch the eye on the forest path. In fact, more often than not it is small, even tiny things that stand out. Leaves are particularly good at demanding contemplation. Not the mass of leaves that continually fall to the forest floor, of course, for they tend to blend together due to their sheer numbers. There are, amongst them however, individual leaves that are unusual in some way, either in their colour or condition. Sometimes intricate patterns are formed by the eating habits of unseen insects, other times a specific leaf may allure the eye. 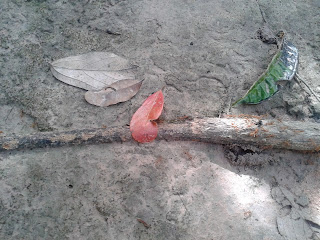 Gazing upwards, branches & leaves are silhouetted against the sky, which is often a few specks of light piercing the darkness. This reflects the denseness of the mind's contents in relation to the clarity of awareness that lies 'behind' them. The cool blue of the firmament is the personification of that quality of mind that is without bias or attachment. So often in the heat of daily activities we lose sight of it, perhaps for years - but then it appears from nowhere, like the heavens bursting forth into the earth. 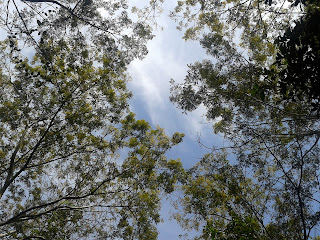 This isn't to say that only the sky of the clear mind is the Dharma ('the truth of the way things are'). Truth manifests in the entanglements of the woods also. Those little things referred to earlier can also be the very arising of wisdom in this present moment, in the form of birdsong or a golden leaf. And there are depths of meaning to be gleaned here, too. A golden leaf may speak to us of something shining akin to a golden buddha statue, or it may equally be the embodiment of impermanence; a fading away of the green of life into the gold-brown of death. Alternatively, beauty may demand recognition, showing us that from the dirt of delusion may grow the flower of wisdom. 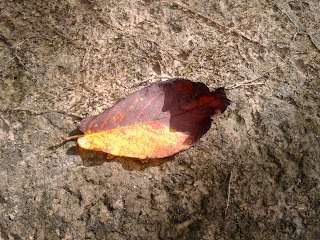 Forest walking is a wonder. But then, to walk anywhere can be wondrous with the correct attitude. Right attitude is one of the eight aspects of the noble path that leads to enlightenment, and it is something that we can all cultivate, whichever particular path we may be traversing. To develop thoughts free from lust, ill-will & cruelty is right attitude, according to the Buddha. On the forest path, we can learn to let go of these negative qualities that prevent the growth of wisdom, and attend to the insights gained through mindful walking. But, we can also do this on any path, and if we do, we will be awakening step by step.
Posted by G at 12:00 AM