Review: Counsels from My Heart, by Dudjom Rinpoche 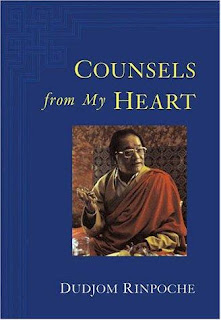 Counsels from My Heart is a small, pocket-friendly book containing a collection of teachings from a Tibetan Buddhist master on various subjects, such as the Buddhadharma, the Nyingma sect, and the Bardo. It is a work full of wisdom regarding Buddhist practice, and yet at the same time contains a certain bias against other forms of Buddhism that seems almost arrogant. Nevertheless, it is a book worth reading, consisting of talks from a widely recognized Buddhist teacher.

Its author, His Holiness Dudjom Rinpoche (1904-1987), also known as Jigrel Yeshe Dorje, was considered to be a tulku (reincarnated master) of a previous teacher also called Dudjom Rinpoche. Born in Central Tibet, after fleeing to India in the wake of the communist Chinese invasion, he was made head of the Nyingma school of Tibetan Buddhism by H.H. the Dalai lama. He wrote copious amounts on Buddhist teachings and travelled widely to share his wisdom, spending his final years establishing a Buddhist centre in France. The book itself was translated from the Tibetan by the Padmakara Translation Group, who have also done a really good job.

The book itself is a series of talks by the Rinpoche given to his disciples, mainly in the 1970s. Due to lack of time & space, we'll focus on two chapters in the book. The first of these, a general encouragement to practice is called Buddhadharma. In it, Dudjom Rinpoche addresses several subjects from the Vajrayana Buddhist perspective. And here it is important to remember that he was a senior representative a particular tradition, for not only does he promote ideas specific to it, but he also heavily criticizes what he called 'Hinayana' Buddhism in the process. (Hinayana is a thinly veiled reference to Theravada Buddhism.)

So, in this chapter the Rinpoche extolls the value of Mahayana - mostly specifically Vajrayana - Buddhism, and the attitude of bodhichitta, which is the aim to help all beings to enlightenment. Another section here is called What is the Mind? In it, Dudjom Rinpoche directs us to examine what the mind actually is, revealing the false assumptions we have regarding it, and the delusion and clinging that cause so much suffering. Here's an extract:

Well, then, where is this self-clinging? Thaty which clings to 'I' is the min; that which clings to "other" is also the mind. So the next question is: Where is the mind? It mustbe somehow in the body, because when the mind is not present, we have only a corpse. So, ask yourself, is it in the top part of the body or the lower part? How big is it? What color is it? If you pull a hair out of your head, it hurts, doesn't it? If you prick your foot on a thorn, it hurts, doesn't it? The mind and body must be somehow coextensive, mustn't they?
(Counsels from My Heart, pp.21 & 22)

As mentioned above, the Rinpoche pulls no punches when referring to what he considered to be an inferior form of Buddhism, known as Hinayana / Theravada. This is something that this reviewer cannot agree with, and so it forms the only criticism of the book in this article. Dudjom Rinpoche came from a long line of Vajrayana masters, and also saw himself as part of the broader Mahayana tradition, also. And, throughout the history of Buddhism, these two major branches of the Dharma have found it necessary to justify their practices and very existence by claiming that Hinayana Buddhism is a selfish, underdeveloped tradition for spiritual simpletons. This is unfortunate, and although Theravada / Hinayana Buddhism has often rejected Mahayanists as being unorthodox, two wrongs don't make a right. Take a look at what the Rinpoche has to say on the subject from the opening chapter:

Those who have the attitude of shravakas and pratyeka-buddhas are not able to appreciate that the whole of space is filled with beings who were once their parents, and that it is for their sake that they should practice Dharma. They are satisfied simply with the idea of freeing themselves from the ocean of samsaric sorrow.
(Ibid. pp.4 & 5)

Shravakas and pratyeka-buddhas are the two classes of Theravada adepts according to the Mahayana classification - those of their own tradition are known as bodhisattvas. As is clear from the above quote, Dudjom Rinpoche didn't seem to think much of the former, and criticized them in the usual way found in many Mahayana teachings. Presumably he didn't know that the idea of everyone having been one's parents is first found in the Pali Canon, the Theravada scriptures. Moreover, living in a country where Theravada Buddhism is widespread, this reviewer can attest to that tradition's encouragement to help other beings to enlightenment. In a later chapter of the book called Practicing Without Sectarian Bias, the Rinpoche criticizes Theravada Buddhism again, whilst discouraging sectarianism within Tibetan Buddhism. Anyway, enough of this griping, let's look at another chapter and see what we find there.

In chapter 7, entitled Introduction to the Jewel of the Fortunate, the Rinpoche discusses rigpa, related to the Great Perfection (Dzogchen), and is rendered into English as awareness. This is an important concept in Vajrayana Buddhism, alongside bodhichitta, and in this brief description Dudjom Rinpoche states that it is "empty, limpid, stunning, light, free, joyful!" (Ibid. p.84) However, he warns us that to simply recognize this awareness is not enough; meditation is still required to develop one's grounding in it and to grow wisdom from it. Moreover, virtue and devotion are also needed at this stage, for as he colorfully puts it, "So don't go around claiming to be some great Dzogchen meditator when in fact you are nothing but a farting lout, stinking of alcohol and rank with lust!" (Ibid. p.88)
He goes on to describe awareness and its perceiver as one and the same, a nonrealistic experience that if sustained liberates one from selfish, harmful actions and modes of thought. Indeed, the usually resultless nature of thoughts die down, revealing the underlying peacefulness of the mind. This is to be developed in meditation practice, allowing thoughts to arise or not as the case may be, neither reacting to their presence or their absence. This sounds like familiar advice, but when combined with the experience of pure awareness, it's suggesting something more radical. Of this awareness, the Rinpoche states the following:

You actually have this awareness within you. It is the clear, naked wisdom of dharmakaya. But who can introduce you to it? On what should you take your strand? What should you be certain of? To begin with, it is your teacher that shows you the state of your awareness. And when you recognize it for yourself, it is then that you are introduced to your own nature.
(Ibid. p.85)

The book ends with a brief autobiographical sketch by Dudjom Rinpoche, followed by a useful glossary and extensive notes. The Padmakara Translation Group have done a superb job of producing this English version, and much credit goes to them, as well as Shambhala Publications. The latter, incidentally, also published another work by Dudjom Rinpoche and the Padmakara Translation Group called A Torch Lighting the Way to Freedom, a much more substantial and detailed work. (Having over 350 pages to the current book's total of 122 - see the link below.) The two works together form a wonderful introduction to the teachings of Vajrayana Buddhism, and those of us fortunate enough to read them owe a service of gratitude to the translators and Dudjom Rinpoche himself. We must draw a close to this review now, but hopefully it has shown the value of Counsels from My Heart, whilst acknowledging the limitations of its sometimes sectarian bias. For, despite the reservations discussed above, this little book is a gem, pointing to the shining jewel of our innate awareness, which is the doorway to enlightenment.


The above book by Dudjom Rinpoche is published by Shambhala Publications, and is available from their website here: Counsels from My Heart


A related post can be read here: Review: A Torch Lighting the Way to Freedom, by Dudjom Rinpoche
Posted by G at 12:00 AM

hi g, its been a while since i read your blogs since the end of the bankei-eckhart series.


you think a meditator removes his selfish desires and lust because his awareness is not his anymore but the all embracing space of no-thingness so as he thinks everything is one and one is all?

Hi Mortepensar,
Nice to have a returning reader! Hope 'Buddha Space' is a welcoming space for you!

Your description of awareness is a pretty good one, as far as descriptions can go. In a sense, the purpose of 'Buddha Space' is to encourage questions in its readership, rather than supply answers. Or, if not actual formulated questions such as, "What is awareness," at least an enquiring sense of exploration of awareness, mindfulness, compassion, etc.

As the writer of 'Buddha Space,' G has no answers for anyone - we all need to find our own answers to the important questions in life. Even when statements rather than questions are made on the blog, whether from G or in the quotations of others, they aren't intended to be definitive statements for anyone reading, simply rhetorical devices to assist people in their search for truth. What that truth is, is up to them, and what they discover.

As to your last point, if we observe carefully, can we honestly say that this awareness is 'mine?' Was it ever 'mine?' Or did it just seem that way? And, in the experience of the awareness here, it isn't that G "thinks everything is one and all is one," but that this is the way life is experienced. Thoughts are useful as pointers to the way things are, and yet if we simply think that this is the way it is, we might want to explore whether thinking something makes it so. In fact, can dwelling in the thought of unity (or whatever) actually become a barrier to actually experiencing it? Meditation is a letting go of thought and conceptions of reality, to the point when we really see it as it is, without the distorting lens of ego. Then the fun begins!

so in buddhism am i right that the main theme of awareness in buddhaspace is an awareness that is not ego limited, one sided, self sided but is more of all embracing like an event looked upon removing observers who have personal opinions, its an awareness that contains things but should let it go in the end when not needed?

the exercises prescribed in the site, am i right its a detachment exercise that should not look things in an egoistic personal manners but in a more open minded in the light of awareness what comes should go, thoughts born are designed to go?

The answers to these questions are in the experiments that you refer to, Mortepensar. What do you see when you look at the the looker or what do you hear when you listen to the listener? Would you say that these exercises lead to the insight that awareness is impersonal, devoid of ego? It's up to you to find your own answer - please don't look to G for your answer. Clearly look at yourself and the answers to your questions will be resolved.

Ha-ha, there's plenty of babbling here, too! But, what is it that's listening to those babblings? If I pay attention, there's a silent awareness present, in which sounds arise. (The same is so for thoughts, too, as attested to by centuries of Buddhist meditators.)

This listening exercise benefits from a relatively quiet environment at first, with just a few sounds being paid attention to. If done this way, the silence is more easily noticed, as is the fact that sounds arise, exist, and then end in it.

nice name like what buddhists usually does Mortepensar means the death of the mind of illusion.