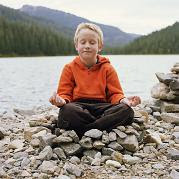 Sitting in meditation today, allowing the mind to rest in this moment with no particular object to focus on, attention moved from one object to another, first a sound then a thought then another thought and so on. Occasionally, awareness would rest in a peaceful state not seeking out mental or physical stimuli, but content to simply be awake to this moment, centered on a quiet bliss. But not for long; soon enough it would become restless once more and look for something interesting to hold onto for a second or two before becoming bored and moving on again. This is the nature of the mind, to grasp after one thing after another, finding nothing ultimately satisfying.

Ajahn Chah has used the colorful analogy of a hunter’s trap to illustrate the grasping mind: when animals are trapped in the hunter’s trap, they must wait for the hunter to come and kill them. When a bird is caught in a traditional trap in Thailand, a string wraps around its neck, and even though it flies here and there, the bird cannot escape. And when the hunter arrives, the bird’s time is up! Sights, sounds, smells, tastes, touch, and mind objects are much the same. They ensnare the mind and leave us in the same predicament as a fish caught on a hook, awaiting the arrival of the fisherman. There seems to be no way out.

When not meditating, the mind continues this pattern of hunting out the interesting, pleasant or stimulating, clinging to each object until it loses its appeal and is discarded as the mind seeks out new something new. First, it wants to read a book, but after a while it becomes uninteresting so the thought of watching a movie comes to mind. Flicking channels on the TV, a suitable film is stumbled upon which entertains for a while, but then this too becomes boring. How about a drink? That’ll stimulate the senses (and the mind) for a moment or two. Not really thirsty, but just seeking out pleasant experience, one put s the drink to one side, half finished and decides to listen to some music. Ah, this is great, letting the rhythm and melody waft over one’s awareness…until this too loses its attraction. Sound familiar?

The mind is a fickle thing, jumping from this to that and then back again on a moment to moment basis. It is not a faithful lover. Learning to see this behavior can be the first step in freeing oneself from the prison of desire, which if unchecked will deny one the opportunity of any real contentment. For contentment cannot be found in the things that might stimulate for a time, but in the stillness that resides beyond both object and desire, and that is the doorway to a truly happy existence.

The above post first appeared on the blog 'Forest Wisdom,' which was reborn as this one.
Posted by G at 10:13 AM