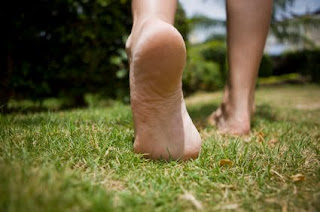 Walking meditation is not so very well known in the West, but is a common practice in the traditional forms of Buddhism found in , and is known as kinhin in Japanese and cankama in Pali. In the forest tradition of many well known monks, such as the renowned meditation master Ajahn Mun, have used the latter method to cultivate enlightening mind states. In Wat Pah Nanachat, the International Forest Monastery in Ubon Ratchathani, walking meditation is used by many of the contemplatives, and has been avidly promoted by its former abbot Ajahn Nyanadhammo.

Walking meditation is a useful alternative (or complementary) technique with regards to sitting meditation, the classical physical position for anapanasati briefly described in the previous post. In his booklet called ‘Walking Meditation’, Ajahn Nyanadhammo states that many monks and nuns have realized insight and enlightenment whilst practicing walking meditation. He also says that in the Forest Monastic Tradition every part of life is an opportunity to meditate, not only when doing sitting meditation. So, cankama can be used as an integrated aspect of Buddhist practice, allowing the various processes of life to be investigated and understood as impermanent, imperfect, and impersonal.

Using walking meditation this way, we can lay the foundations of a steady and alert mind which can be of benefit away from the meditation path. We may find that there is an increase in the general alertness of our actions as well as with regards the feeling of walking itself. Then, wherever we are, we will be walking the Buddha’s Path of wisdom.

The above post first appeared on the blog 'Forest Wisdom,' which was reborn as this one.
Posted by G at 7:26 AM

I never put much into walking meditation, until I ordained for a short time and used it every day to proceed sitting meditation. It is a fast way to get my mind to settle down by getting it to focus on task at hand...each foot.

Good to read of your use of walking meditation, 'Was Once'. Using it to prepare the mind for sitting meditation is a wise way to utilize it; thanks for sharing your experience!

I think walking meditation is done more in the West than what you represented here, at least in America. I've practiced in a few east coast American cities and suburbs, and at each place, there is walking meditation between or following sitting periods. But for less time than sitting; if one of my groups does 30 minutes of sitting it'll do 10-20 minutes of walking. The retreat I did, also in an east coast town in the US, had equally long alternating periods of sitting and walking and lots of beautiful walking paths inside and outside. But I would agree with you that walking is a bit less appreciated overall.

Generally, when westerners think of meditation, they think of the sitting variety, often considering it to be extremely boring - which it certainly can be! Walking meditation offers a way to cultivate a meditative mind that's more active, and possibly more appealing to those that consider anapanasati, zazen & similar forms to be lazy & boring. (Of course, given time, sitting meditation produces states of mind anything but boring, but this is not, perhaps, the popular idea.)

Whether used during the same period as sitting meditation, or used on its own, those that use walking meditation can attest to its efficacy.

Thank you for the interesting and beautiful post! It is so good to read this. I did the walking meditation (I didn't put my hands together and I wasn't barefoot) without being aware of it and I felt so quiet and calm inside myself! Here (I live in Germany and I am Luxembourger) you only here about Tibetan Buddhism. Because of your blog I could hear about the great Masters like Ajahn Chah or Ajahn Sumedho... Always so nice to passing by! Thank you, Gary! Renée

Renee, the actual form of the walking meditation isn't so important, really, is it? The example in the original post is just one way to practice this mobile meditation. As long as mindfulness is established, along with other benefits such as the sense of calmness that you describe, the particular methodology is up to the individual, really, isn't it?

Walking, sitting . . . living meditation. I am finding every moment lends itself to meditation. Of all the activities however, sitting has proved the most pregnant with transformation, for me at least. This is something in the act of sitting still with oneself that is uniquely conducive to focusing, and also "going onto being" - borrowed from Mark Epstein.

When life becomes meditation, every step is a Buddha-step, and this is "coming into being". (Not borrowed!)

Thanks to your info.I will comeback to your site Again.Invite for My sites.Visite it Please
Walking Meditation
Facts About Cancer

I saw a webinar on research done by the leading academic research group on PNSE (enlightenment, nonduality, etc.). I've heard they have circulated an unpublished book manuscript that expands on the research summary they have posted athttp://nonsymbolic.org/publications. Does anyone have it to send to me? Thanks!

Can't help you there, Alex. Walking meditation can be experienced as 'non-dualist' or 'non-symbolic' walking, as it brings attention to this moment & unifies mind with its contents - the act of walking. Thanks for the comment.

True Happiness Comes from Within
You can't and shouldn't depend on others to be happy. You are the source. Wake up and realize it. Learn how, with Finders Course: http://www.finderscourse.com