Not Me, Not Mine (Anatta) 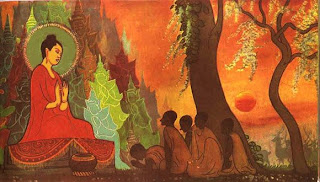 One thing that you come to realize in Buddhist meditation practice is that nothing you previously took to be you is, in fact, you. By this, I mean to say that both body and mind do things that we don’t want them to do; they age, get sick, and die, no matter how much we protest or wish otherwise. How often has the body been unwell or tired when we really wanted it to be at its best, and how many times has the mind not been able to focus on the task at hand, distracted by regrets, fears and the like? Let’s face it, neither body nor mind really belongs to us; they belong to nature. They are natural phenomena, going their own way, doing things that we’d rather they didn’t: aging, being ill, and then dying. This understanding of the true nature of our ‘self’ forms the heart of the Buddha’s teaching. It’s what makes his message so profoundly different from the other spiritual greats. He first taught on the impersonal nature of existence in his second sermon called the Anattalakkhana Sutta which he gave to the five ascetics that had become his first ordained disciples. (‘Anattalakkhana’ is usually translated as ‘the Characteristic of Not-Self.’) All five monks realized complete enlightenment for themselves after hearing this teaching of the Awakened One. He taught:

Basically, the Buddha said that since we have no ultimate control over whether our bodies are sick or not, young or old, alive or dead, they are not truly us, nor do they belong to us. These bodies will get ill, age, and die according to their nature, irrespective of what we think. The Buddha also applied this principle of not-self to our feelings (positive, negative, and neutral), to our perceptions, mental formations (such as thoughts), and to consciousness itself. None of them constitute a permanent self, and nor do they belong to a ‘me’ that I take to be here; they belong to nature. This is the radically unique teaching of the Awakened One that had not been taught before him by any other religious figure: indeed, it has not been taught by any major non-Buddhist religious leader since, either. Usually, religions involve the concept of an eternal self, or soul, whereas the Buddha cleverly avoided the attachments that can grow towards such concepts, thus causing a revolution in the spiritual history of humanity. The repercussions for the understanding of what we are are still being felt over two and a half thousand years later, not only within the Buddhist traditions, but increasingly amongst scientists, too.

The Awakened One went on to tell the five ascetics that since the five aggregates of form, feeling, perception, mental formations, and consciousness are impermanent (anicca), they are also unsatisfactory (dukkha). They are transitory processes over which we have no fundamental control. Further on in the Anattalakkhana Sutta, the Buddha also states that whatever form, feeling, perception, mental formations, and consciousness are experienced, whether of the past, future, present, internal or external, gross or subtle, inferior or superior, and whether they are far or near, they should be seen clearly with wisdom:

Through meditating on these observable facts, one may penetrate through the veil of the delusory self and see the Dharma, the way things are. This is Nirvana, the ‘snuffing out’ of the flames of greed, hatred, and delusion. Of course, when anatta is discussed, many people don’t like to listen to such teachings, as they cling to the idea of having, or being, a separate, individual, and permanent self. But then, if they were to reflect on the feeling of anger, for instance, noting that even though they may not want to be angry, they cannot simply throw the feeling away, they may begin to gain a glimpse of anatta. If we wish to transcend this world of suffering, we all need to investigate such feelings with wisdom, understanding why they arise, rooted in the delusion of self, and fuelled by greed and aversion. Seeing and understanding the truth of anatta through meditative experience, we can let go of all of this self-delusion, and be truly free.

The above post first appeared on the blog 'Forest Wisdom,' which was reborn as this one.
Posted by G at 9:00 AM

Ajahn Brahm gives a whole hour long talk on this statement on one of the Vassa collections. It really is a helpful way of getting perspective on all the constant "I making and my making" that go on in the course of a day.
It's nice to see you back and ressurecting some of the Forest Widom stuff. I hope you are well.

"I making & my making" - nice, succinct way to put it. Perhaps 'rebirth' is more appropriate than 'resurrecting', though, Justin! ;-)

Thanks for yr posting. I found that while practicing Vipassana meditation, if I hold this thouhgt-Not me, not mind-it helped great deal to ease the posture pain which I was struggling for so long. Just wondering if any other more powerful thought will come to me in due course of time to meditate upon

Great to read of your application of "Not, not mine," Anonymous. Quite possibly other powerful thoughts may arise in meditation - but perhaps no thought arising at all might prove even more powerful! Thanks for the comment.

Does anyone know the rest of the quote: This is not mine, I am not this, this is not myself....(I have parts of it - "All that is mine...pleasing, will become other...will become separated from me.")Can someone fill in the blanks?

Short,precise and very understable.thanks for such wonderful post.Hope to see more such writings...

In the Anattalakkana Sutta (the Discourse on the Characteristics of Not-Self), Buddha says the following regarding each of the five aggregates of form, feeling, perception, mental formations & consciousness: "This is not mine, this is not I, this is not my self." This stock statement can be found throughout the Pali canon. As to your second fragmented quote, Anonymous, it appears to be part of the five recollections chanted by Theravada Buddhists around the world, itself taken from the Pali canon, and found in the Upajjhatthana Sutta: "All that is mine, beloved and pleasing, will become otherwise, will become separated from me."

Thank you for your positive feedback, Anonymous (Oct. 10). Be well in the Dharma.

Thanks again.. for the reply....can you suggest the Good Books on Dhamma teachings ...?

I hope you are well and happy.

Thank you, Sylvie for the kind words. I hope you are well & happy, too.

Anonymous (Oct. 11), at the top of this page there is a link to a page called Teachings' which contains a list of good Dharma books. Sorry for the delay in replying!